To Live or To Write?

“Then, I might stare at the laptop screen for a few minutes until I remember a phone call that must be made. Today—and this is five days after I started this piece—we have to go to the spring (15 minutes away) to fill up our water containers, and down to the port (15 minutes in the opposite direction) for groceries—and by 2-ish, when we get back, it will be time for the daily salad and then Morpheus will rob me of my best intentions to read an actual book. A trip to one of our five nearest beaches will follow. So secluded are they that I’m often able to swim topless. Sometimes, I think the caresses of the Aegean are even more satisfying than sex.”—Diana Farr Louis 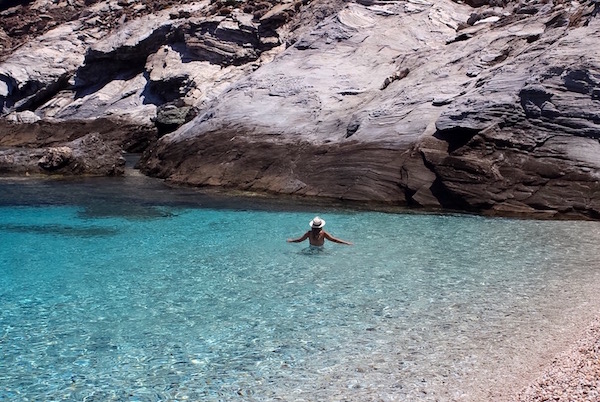 Swimming, as opposed to writing. (Photo: We Are Travel Girls.)

ANDROS Greece—(Weekly Hubris)—(First Published on July 30, 2012)—It’s six o’clock and I’m standing in front of the kitchen window, washing spinach. It’s something I feel I have to do before I sit down to write this column. Before that, I made a new batch of granita—with the last of the fresh plums (oh, but there are several Ziploc bags bulging with them in the freezer). Washing the spinach takes four sinkfuls of water, but I carry each slopping basin out to the pomegranate trees, hoping to coax them into sprouting more flowers and therefore more fruit. At the moment, one tree has about six, the other nothing except an empty bird nest. Well, not quite empty; one tiny gray-green egg never hatched.

I almost watched the other two hatch and was very discreet about picking plums since some of its branches invade the pomegranate’s space, or is it the other way round? The mother bird, a tiny grey thing, sometimes flew off, but sometimes stayed put and watched me suspiciously with ruby eyes.

I missed the moment the fledglings left. In the morning, just two and a half weeks after they hatched, they looked like jellied blobs, not even recognizable as birds. But by afternoon they’d gone. That night, before we went to bed, my son and I remembered to bring in the laundry. There, asleep on the clothesline, was a walnut-sized ball of grey fluff, eyes tight shut, perfectly balanced. Inexplicably, we did not run for our cameras.

By now, I’m sitting at the laptop, but don’t think for a minute that this can last. I have denied myself my daily swim—a major sacrifice—but there’s no other way the afternoon can accommodate a writing session. My grand-dog, my faithful beach companion and another Florence May Chadwick (remember the famous Channel swimmer?) shows her disappointment by being on the wrong side of both our doors until I feed her. 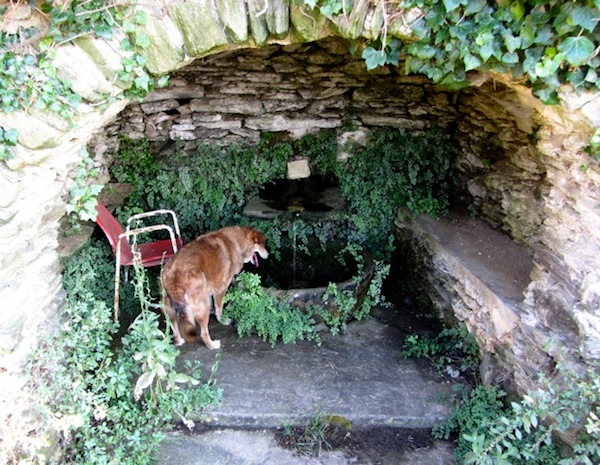 I also have to take time out to check the view, now that we actually have one. The heat haze has been so dense we felt like England that memorable day when the radio announcer proclaimed “the Continent cut off by fog.” This evening, for the first time in at least a week, we can actually see several islands and the mainland, and as usual, we keep tabs on which ferries are passing by.

And I have to encourage J-o-t-P (my spouse), who has decided to paint the low wall that separates the living room from the kitchen. He’s on a roll, scraping and painting shutters, doors, window frames, kitchen cupboards. Most of the time, he does the job unassisted, but I do have to be at the ready with a wet sponge (usually alerted by a familiar expletive) or for a final inspection.

Disaster struck this morning when probing around the bottom of the kitchen’s Dutch door revealed rot so deep it had left a doughnut-sized hole. Digging out rot is as irresistible as picking at a scab: so many of the shutters, frames, and doors that have not been replaced with aluminum bear ragged gouges or fresh silicon patches which my surgeon husband treats with the same mixture of enthusiasm and weariness he would have once brought to the last operation of the day. (Forgotten is his first DIY table with its wildly uneven legs.)

But I really should get up and bring in the tomatoes, which have been baking in the sun since morning. Split in half and sprinkled with salt, they dry in about five days and then I put them into jars with olive oil and basil. These are too precious to give away for, as our nephew on Crete says, “Don’t bother, I’d eat them all in one sitting.”

I didn’t mean to make another batch so soon after the last two. One gets fed up with slicing kilos of tomatoes and watching one’s nails turn orange, and I’d also just made a big pot of tomato paste (with sugar and chili pepper), but Mihalis up the hill trudged down with a big bag of toms, peppers, and cukes from his garden, far too many for our daily salad.

Generosity can be found among some locals, though Andriots don’t compete for Miss or Mr. Congeniality awards. For breakfast, we had the last of three, slightly bruised melons given to me by the farmer from his pick-up after another customer rejected them. They were juicy and just as good as if they’d been paid for. And it must be said we do have our stock of home-made tsipouro (way too strong for our liking) disguised in water bottles at the back of the liquor shelf  (though the freely bestowed plastic containers of orange (!) Andriot wine, accepted with reluctant embarrassment, always go straight to the septic tank, alas).

Theoretically, mornings offer more space for writing, but I can’t approach the computer with jammy fingers, so I use them to turn the pages of The International Herald Tribune, my favorite newspaper. Around 10, I take a break to pick the dead heads off the petunias and geraniums, harvest sprigs of oregano or lavender—a formidable job requiring close attention to wasps’ nests—or scribble down a grocery list.

Then, I might stare at the laptop screen for a few minutes until I remember a phone call that must be made. Today—and this is five days after I started this piece—we have to go to the spring (15 minutes away) to fill up our water containers and down to the port (15 minutes in the opposite direction) for groceries—and by 2-ish, when we get back, it will be time for the daily salad and then Morpheus will rob me of my best intentions to read an actual book. A trip to one of our five nearest beaches will follow. So secluded are they that I’m often able to swim topless. Sometimes, I think the caresses of the Aegean are even more satisfying than sex. 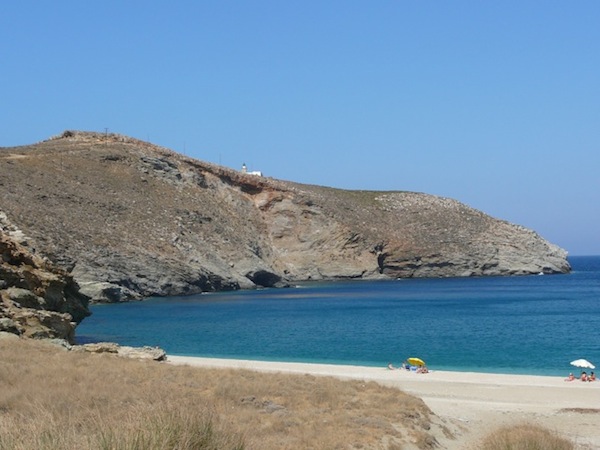 Ahla Beach, not nearby, but one of the island’s prettiest.

My life might sound like a big yawn to some, but I love the rhythms and the silences—amidst the bleats of sheep and goats, the mews of the buzzards, the sawing of the cicadas, and the yips and barks of the dawg in the evening as she protects her territory from all manner of threats.

You would think that among all these minutiae of observing, cooking/preserving, gardening, reading, even a bit of socializing, there would be plenty of time for writing but, as Gish Jen noted in a fine essay, “Inventing Life Steals Time, Living Life Begs It Back” (in Writers [on Writing], collected essays from the New York Times, 2001): “There is never enough time for writing; it is a parallel universe where the days, inconveniently, are also twenty-four hours long. Every moment spent in one’s real life is a moment missed in one’s writing life, and vice versa.”

But, like her, though I may not manage it every day, I find “life without work strangely lifeless.” It’s hard to arrive at a balance (something I crave as a Libra), but I guess the urge to preserve the moments I value, the blessings that Greece is still able to provide, is just as strong as the urge to preserve my plums and tomatoes. It may explain why I continue to write, even without remuneration. 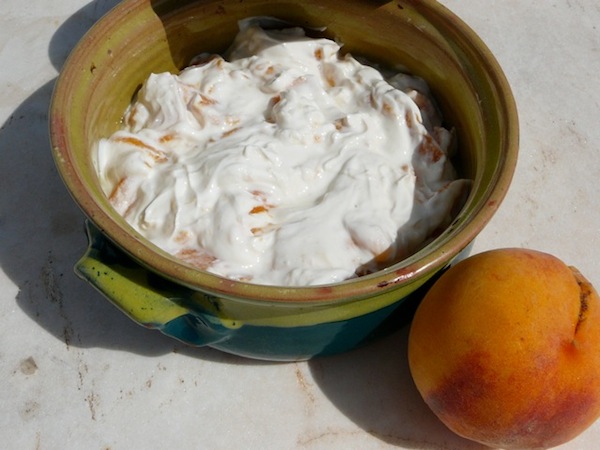 This is our family’s favorite summer dessert, much easier than pie to make—where on earth did that remark come from?—and involving no cooking.

Peel the peaches and slice them into a serving bowl. Sprinkle with the sugar and lemon juice (and grated peel, if using). Add the yogurt and mix gently but thoroughly. Cover and refrigerate for at least 3 hours. Serve with the cookies of your choice. A British guest the other night brought some chocolate-coated Oreos as a treat for her American hostess, which were an exotic surprise to this expat. Fiorentines—slivered almond/caramel confections—would also partner well.