Tressel, Tattoos & The Need to Belong

LONG ISLAND New York—(Weekly Hubris)—6/13/11—With the three-ring circus of media attention surrounding the Ohio State football program over the past weeks, it has become apparent that perception has once again fallen to reality. Jim Tressel, a man whose public persona was that of dogged coach, moral compass, and the most upright of citizens, has apparently been covering up the misdeeds of his players, even lying about his knowledge of those misdeeds, and for quite some time. 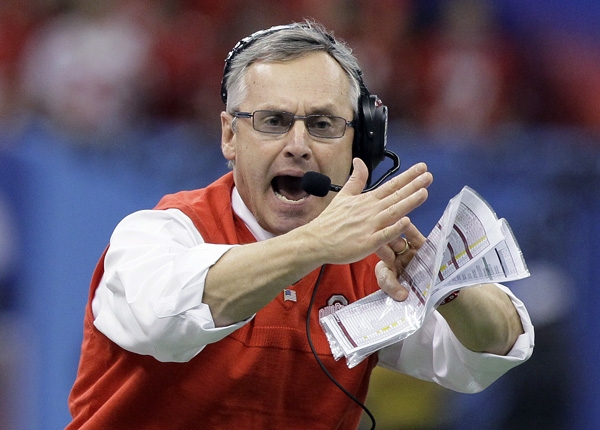 As a football nut and proud graduate of Youngstown State University in Ohio, I remember Tressel best as the plucky coach of the YSU Penguins. I spent many a Saturday in the tailgate lot, playing the fight song for free beer and food in a band that my friends and I would throw together for home games.

The fans there were as rabid and raucous as any fan base I have since encountered, and all for a tiny little school competing in I-AA football for a championship that most people don’t realize exists. (Anyone who decides to lecture me on the fact that I-AA is now called the Football Championship Subdivision and I-A is now the Bowl Championship Subdivision will receive a tongue-lashing from me about how the NCAA tried to re-name its problem out of existence, namely the problem of having a fraudulent way to determine a true champion at the highest level.)

Coach Tressel had turned the team around, breathed life into a desperate fan base, and injected a sense of pride into all of us with his no-bullshit, defensively minded style of football. We were hooked—not just on the game, but on Tressel as well.

All of this fanatical devotion may have been whipped up by the success of the Pied Piper of Pigskin, but its origins are much deeper.

Ohio in general, and Youngstown specifically, have been in a downward economic spiral ever since the early 80s, when then-President Reagan took time out of his busy sucking-up-to-the-religious-Right schedule long enough to deregulate the steel industry, thus destroying the life’s blood of the Mahoning Valley.

By the time Tressel became coach at YSU, the cultural identity provided by college football was practically all that was holding the spirits of Youngstown and the surrounding mini-Rust Belt together. The fact that the valley was a stronghold for the Mob for years meant, among other things, that the people of the area were no strangers to shady dealings and scheisty tactics: Tressel’s malfeasant ways were piddling by comparison, and were largely ignored or simply swept under the rusty carpet.

Besides, nobody in Youngstown cared or wanted to care while under the hypnotic spell of his charms. Tressel was a Messianic figure in a place searching frantically for a Messiah.

He read the Bible in the morning; he gave the keynote address at my high school’s graduation, preaching personal integrity and responsibility; the man wears sweater vests.

By the cut of his jib, he was more like a hipper version of Ned Flanders than he ever was like Woody Hayes. Sure, he’d curse every now and then in public, but it was never more than a “damn,” and it was usually uttered in the impassioned throes of yet another national title victory. He was the all-American hero that everyone in Youngstown wanted, NEEDED, to get through the hard times; the glue that held the collective identity of the valley together.

After leading YSU to four I-AA national titles in seven seasons, Tressel left YSU after the 2,000 season to become head coach at THE Ohio State University (I left Y-town then as well, but chose Kent State instead: in the battle of Hippies versus Yuppies, the Hippies won. AND I met my wife there, so I won).

At about the same time, the rest of the state was showing the wear and tear of an industrial exodus such as Youngstown had experienced in the 80s and 90s. Now on an even bigger stage, Coach Tressel was to the entire Buckeye Nation what he had once only been to the Mahoning Valley, a savior destined to return OSU football to the Promised Land, which would somehow make everything better.

So it’s not so hard to understand how an entire state was buying the hype with Jim Tressel, while his athletes were working “jobs” at dealerships owned by powerful alumni, selling or trading game-worn football gear for tattoos and weed, driving around in Super Fly cars provided by the aforementioned car dealers . . . the list goes on and on (seriously, read the Sports Illustrated article, it provides a flabbergastingly deep look at the situation).

People have always felt a need to belong to something bigger than themselves, and one of the easiest ways to do this is through sports. Where else do you get to practice such fervent belief in and zeal for something, en masse, without going to church?

Combine a fanaticism that’s rabid even in the good years with a state-wide economic depression, and you somehow find yourself sitting there, glued to ABC, convinced that the Buckeyes would at LEAST make your Saturday better by beating Penn State—I mean, it’s not like the Bengals or Browns were going to help you at all on Sunday. Hell, maybe a win on the road in Happy Valley would be enough to keep you smiling all week—until next Saturday, when OSU gets to pound the crap out of Akron or Bowling Green or Youngstown State. (Say what you will about Tressel, he was forever scheduling the cupcake games with Ohio teams, thus rewarding the smaller schools in the state with a nice fat check from The Mothership for being the punching bag du jour.)

Hope, springing eternal, for twelve weeks in the fall, even when your world is falling down around you. You not only look the other way if those boys are trading helmets for full-sleeve arm tattoos, but you also figure they might even deserve such under-the-table indulgences for as much money as they make the university.

The problem here, of course, isn’t cheating coaches, or shady boosters, or even the players and their seemingly inalienable right to cars, dope, and tattoos (Tattoos? Really??? You wouldn’t rather trade your helmet for straight cash so you could take your girlfriend out on a date? Wait, of course, that’s what you sell the game day cleats for! My bad!).

The problem isn’t even with us as fans, at least not as a whole; a group identity can be healthy when taken with the proper grains of salt, and especially in sports where it’s fun to be a fan when your team wins, but you still have a good time when your team loses.

Tressel, the guy who literally wrote the book on character and integrity, was rigging the football camp raffle to favor the blue-chip athletes, getting his quarterback out of a pile of unpaid parking tickets AND lying to anyone who would ask about his knowledge of alleged violations, all the while using his perceived stance of rectitude as a shield to deflect the issue if and when the shit really hit the fan.

And everyone in Ohio—from the crooked boosters to the tattoo parlor owners to the people in the tailgate lot to the marching band to the millions watching at home to my friends to me—everyone bought it. We bought it because we were in need of something bigger than we were to believe in on the weekends and, for a while, the lie was perfect.

I think even Tressel bought it to a certain extent, like a spy who lives incognito for so long that he begins to believe his own cover story. He bought it because he had to, in order to maintain such a pious life on the outside while facilitating and downright ignoring the irresponsible and often illegal activity that was going on within the ranks of his own team.

Now that the ruse is over, and we know that Tressel is just a man—with faults and flaws—like everyone else, I desperately want for him to return to Youngstown State so we can start winning championships once more. If we’re going to criticize people for what they’re bad at, then we should recognize them for what they do well.

In Jim Tressel’s case, I like him a lot more as a world-class football coach than I do as a fourth-rate savior. I just hope he can learn to live without an O-shaped halo over his head.

One Response to Tressel, Tattoos & The Need to Belong