“Sandy, they’re all over me with this goddamned Ukraine thing, the Doral Club G 7, and the transcripts. Tell me you didn’t tape our Khashogi calls. If they find out it was my idea to lumber-mill his ass, I’m gonna lose some Midwestern states. Rudy’s gone nuts, Mulvaney just gave my confession on TV, the Kurds are screaming genocide, Zelensky’s a goddamned comedian and he only plays along ‘cause he needs the Javelins, but he has a quid pro quo tape. I’m in this thing up to my dewlap. (BEEP) . . . Did you hear that . . . that beep? Are you recording this?”—Ross Konikoff 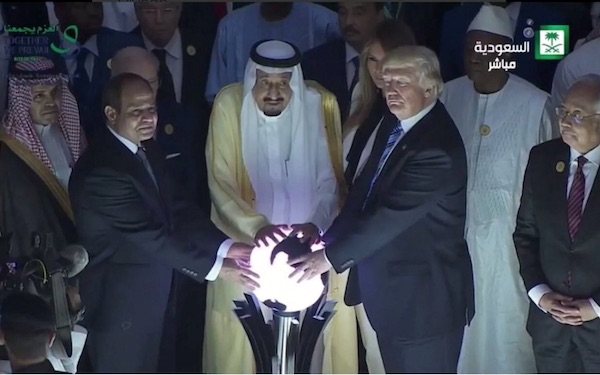 Editor’s Note: So, I’ve known Manhattan humorist and trumpeter Ross Konikoff for a good two decades now, but this may be the funniest piece he’s ever turned out (and there’ve been many). Not that his subject, our current and lamentable national debacle is inherently funny, but Konikoff just has a Catskillian way of turning The Daily Tragedy that is Trump into, well . . . sufganiyat. Please also note well: your tireless editor here has provided bluelines through to the most arcane of the humorist’s lexicon. Meeskite, just for example, is worth the price of admission here.

MANHATTAN New York—(Weekly Hubris)—December 2019—Trump: Hello? Hello? This the President of the United States, Donald J. Trump. I want to talk to President Salmon, or whatever.

Trump: Hey, King, I’m glad I got you in. I figured you’d be back from church by now.

Salman: (He covers the phone and says something to the others and the room erupts in laughter.) After church! Dotty, you’re killing me!

Salman: Thirteen of them are in Mecca and the other 17 are in Jeddah with their mothers. And how about your brood? I figured you’d be tied up with the whole Rosh Hashanah balagan, with Mel, Ivy, and that meeskite, what’s her name again . . . uh . . . Tiffany?

Trump: Yeah, Tiffany. Nah, they’re doing their thing without me this time. Sandy, they’re all over me with this goddamned Ukraine thing, the Doral Club G 7, and the transcripts. Tell me you didn’t tape our Khashoggi calls. If they find out it was my idea to lumber-mill his ass, I’m gonna lose some Midwestern states. Rudy’s gone nuts, Mulvaney just gave my confession on TV, the Kurds are screaming genocide, Zelensky’s a goddamned comedian and he only plays along ‘cause he needs the Javelins, but he has a quid pro quo tape. I’m in this thing up to my dewlap. (BEEP) . . . Did you hear that . . . that beep? Are you recording this?

Salman: DJ, you know I never record phone calls. (The sound of laughter in the background ripples through the room again.) It’s just a little timer my guards are using to steam up some Kabsa. They like a little nosh when they come by on Sunday to watch NASCAR on my 72-inch flat screen.

Trump: I only got four 48s, but it’s a small room. Listen . . . about Khashoggi. Don’t get me wrong, I appreciate you sending me his teeth out of respect, but I had to bag ‘em up and stash ‘em ‘cause there are spies everywhere. (BEEP) Wait. There it is again. Are you hearing that beep?

Salman: That was my Apple watch alarm. It’s prayer time. I gotta turn East and drop for 20. Can I call you back?

Trump: Don’t go yet! Just tell me there’s no tape!

Salman: On my brother’s graves, all of them, it’s the emes! There’s no tape! You’re coming apart, Peaches.

Trump: Don’t bullshit me, you GODDAMNED CAMEL JOCKEY! I’m telling you, they’re out to get me!

Salman: Simmer, Donny, simmer! Here in the palace, we have a little song we sing when things get rough and we have to murder a family member. (Sings.) “When Sunni Gets Blue, the spies get mean and rowdy, and the reign begins to fall . . .” Donalah, I got your back. I’m your Spanx! Just keep those missiles coming and everything is kewlies.

Trump: OK, OK. By the way, Your Highness, have I got a deal for you! My boys just found out you Arabs like to play golf, just like regular people, so we floated an idea. You write us a check for $3 billion, made out to Trump Real Estate Licensing LLC, The Caymans, and I’ll build you a beautiful Trump International Golf Resort that’ll put your other course to shame.

Salman: What other course?

Trump: You know, that one by the water, Golf of Bahrain.

Salman: (He spits out his tea, then covers the receiver of his phone and yells to the guys in the room, C’iinah yuetaqad ‘anah maleab liljawlif.”* The room bursts out in howls of laughter until Salman shushes them and uncovers the phone again.) Donny, you stable genius you! Yet another idea that will bring our nations closer together! We can discuss that later in the year, when sandstorms make it necessary for us to shut down our . . . Golf of Bahrain for the season. (Roars of laughter in the background again.)

Trump: Who’s laughing? What are they laughing at? Am I on speakerphone?

Salman: That was the TV. They’re watching a rerun of “I Love Lucy,” and you know how heavy-handed they were with that laugh machine. (Beep.)

Trump: Dammit, there it is again. Now don’t tell me you didn’t hear that!

Salman: I heard nothing.

Trump: Don’t cross me Sal. I’m bat-shit crazy and I can bring fire and fury, the likes of which . . .

Trump: We are friends, Sally. You’ll get all the missiles and planes you want. I’ll even throw in a few thousand troops to sweeten the deal. So, we’re cool then?

Salman: We’re cool, Donny. I don’t know from tapes, we never spoke on the phone, and next time I see you, I won’t even shake your hand. Listen, Trumpy Bear, I gotta go pray, you big, soft boy-toy. Auf wiedersehen.

Salman: Oh, and send Pence back here. We’ve got a thousand pairs of boots that need a good spit shine.