“People post pictures of themselves and of their diseased parts and invite “friends” to offer diagnoses—a practice that is standard, with somewhat greater legitimacy, on various other social networking sites dedicated to medical matters. Interestingly, and sadly, it is reported that the recipients of these diagnoses often repose more confidence in them than in those offered by their doctors.” Sanford Rose 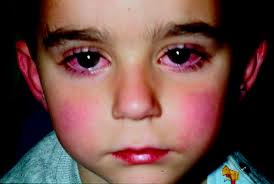 A “portrait” of Kawasaki syndrome.

Facebook is turning into the greatest enemy of privacy ever devised. And the end of privacy is of course one of the key biomarkers of the collapse of civilization.

Ergo, number Facebook among the foes of civilization. It is the death of “. . . Peace, and Quiet,/Spare Fast, that oft with gods doth diet.” (John Milton, Il Penseroso, 1631)

It is the symbol of the underworld of ambiguous, edulcorative euphemism in which people don’t speak, but “reach out”; don’t have problems, but “issues.”

If everybody is my friend, who is my acquaintance?

I am not an island unto myself, but I want some separation, some time to court the sweet cherub, contemplation.

Yet I recognize its virtues. I am informed that it is becoming a virtual medical system, supplanting, in some cases, the official one.

People post pictures of themselves and of their diseased parts and invite “friends” to offer diagnoses—a practice that is standard, with somewhat greater legitimacy, on various other social networking sites dedicated to medical matters.

Interestingly, and sadly, it is reported that the recipients of these diagnoses often repose more confidence in them than in those offered by their doctors.

Facebook boasts at least a few major successes: For example, the posting of one picture led to the early diagnosis of a case of Kawasaki syndrome.

Fine! What about the failures—the phony diagnoses that steered people in the wrong direction or encouraged them to believe that what was in fact malignant was benign?

Diagnosis and treatment by social networks is obviously full of pitfalls. Yet its spread is inevitable.

The good news is that its popularity may encourage, nay force, both government and the laggard medical community to move forward on the technology of full-body digitization.

With appropriate support, acceptance and government assistance, it may soon be possible to perfect nanosensors no larger than grains of sand that, when injected into the bloodstream, are capable of detecting incipient cancer, heart disease and diabetes. If the data from such sensors can be effectively managed, it will assist medical practitioners in making speedy and cost-efficient diagnoses that will obviate their neglected patients’ need to seek assistance from virtual peers.

If the self-help medical revolution of the social networks leads to such a development, what is now an exercise in mass insecurity and the wanton waste of precious hours may ultimately redound to the social good.

I will probably never “like” it, but I will dislike it much less.

PS More from Milton’s Il Penseroso: “Thy rapt soul sitting in thine eyes:/There held in holy passion still,/Forget thy self to Marble, till/With a sad Leaden downward cast,/Thou fix them on the earth as fast./And joyn with thee calm Peace, and Quiet,/Spare Fast, that oft with gods doth diet,/And hears the Muses in a ring,/Ay round about Joves Altar sing./And adde to these retired leasure,/That in trim Gardens takes his pleasure . . . .”