“On my first trip to Key West, Florida, I visited the home of Ernest Hemingway to explore the gardens, and discovered that there were more than 150 cats living on the premises. The scene in this watercolor shows the jungle-like vegetation surrounding the writer’s house.”—Meredith d’Ambrosio 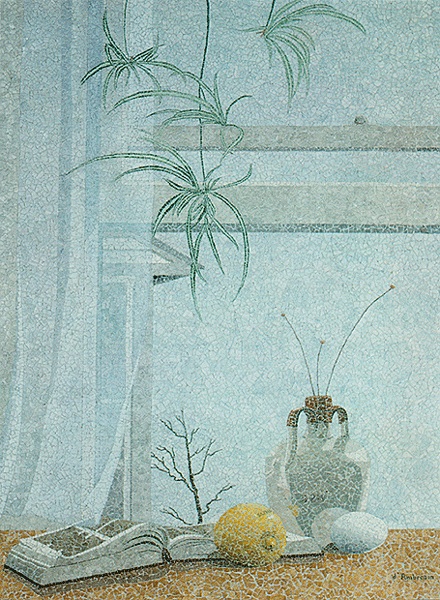 I find it difficult to paint an indoor scene: my works almost always expand into dimensions beyond the confines of a single room. The viewer is made aware here of the other side of the room by the reflection in the jug; and yet another part of the house appears outside, beyond the window. The reflection of the egg in the jug illustrates my sense of tongue-in-cheek (egg-in-jug?) humor, as I used the medium of eggshells to create this mosaic. 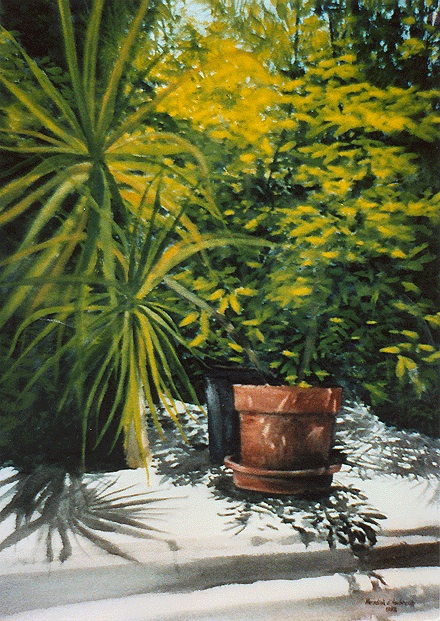 On my first trip to Key West, Florida, I visited the home of Ernest Hemingway to explore the gardens, and discovered that there were more than 150 cats living on the premises. The scene in this watercolor shows the jungle-like vegetation surrounding the writer’s house. 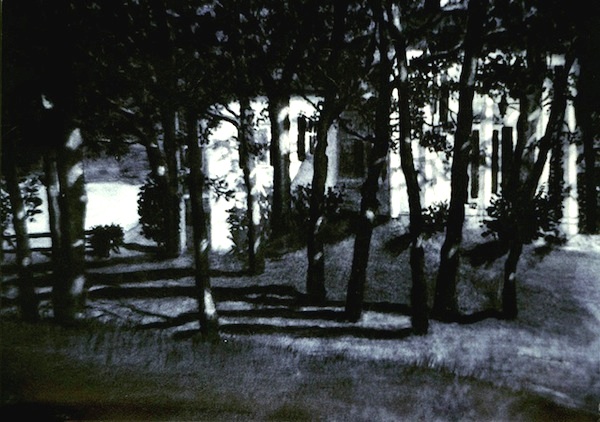 On our late night walks to the top of Daniels Island, my husband and I would often marvel at our neighbor’s Georgian Colonial overlooking Ockway Bay, lit by the full moon. This watercolor caught in amber the many tall old trees which were eventually felled in 1992 by Hurricane Bob.

Note: Meredith d’Ambrosio’s exhibition of paintings entitled “Landscapes of the North Countries” will run from Sunday, November 15, 2015 through Sunday, February 14, 2016 at the Art Complex of Duxbury, Massachusetts, 189 Alden Street, Duxbury MA; daily opening times, 1 till 4 p.m., Wednesday through Sunday; Monday and Tuesday, closed. The opening reception will be held on Sunday, November 15, 2015, 1:30 to 3:30 p.m.; Ms. d’Ambrosio will give a concert, accompanied by Chris Taylor on piano.