“My friend Audrey Mannes Mosello put this (vinyl) ball in motion when she asked me, on Facebook, to post my favorite albums on my wall over a specified period of time. Or something like that. Audrey, you know what you asked, but I doubt you expected the deluge that would follow as a result. Never one to color inside the lines, I decided to view your request as an open-ended one. When you have over 30,000 LPs, CDs, and other media of preservation in your analog archive, a Twenty-day Challenge will not suffice.”—Dean Pratt 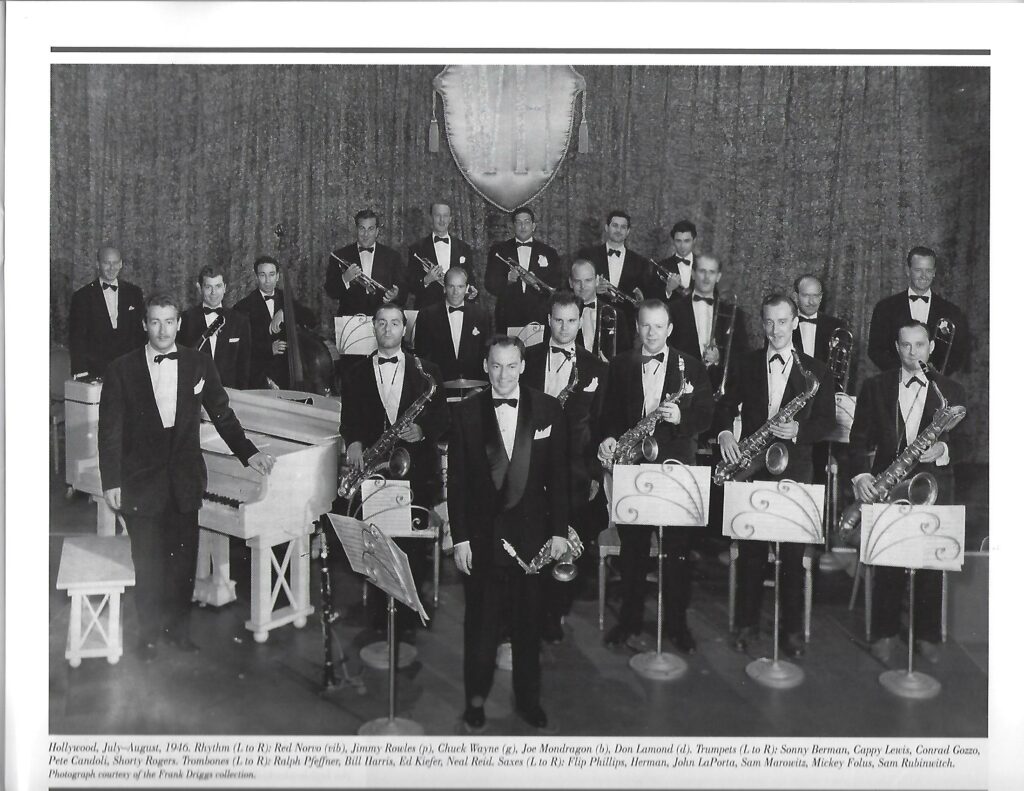 “I’m the only one who played on all five herds.”—Al Porcino

PENDLETON South Carolina & NEW YORK CITY New York—(Weekly Hubris)—February 2020—My friend Audrey Mannes Mosello put this (vinyl) ball in motion when she asked me, on Facebook, to post my favorite albums on my wall over a specified period of time. Or something like that. Audrey, you know what you asked, but I doubt you expected the deluge that would follow as a result. Never one to color inside the lines, I decided to view your request as an open-ended one. When you have over 30,000 LPs, CDs, and other media of preservation in your analog archive, a 20-day Challenge will not suffice. So, you all now know where to lay the blame, years from now, when I am still posting “my favorite albums.” There are a lot of them.

My first offering of favorite albums comprises five by Woody Herman and his Herds. How many herds were there? Most people say five: The First Herd, The Second Herd, The Third Herd, The Swinging Herd, and The Thundering Herd. It’s hard to get all the herds in for one selection, but these five albums will do. 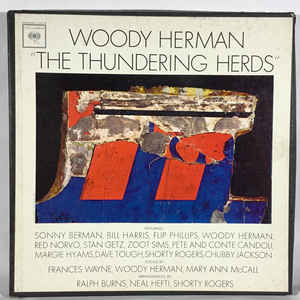 Listen to the first and second herds blowing through some of their most famous recordings; and dig Woody’s vocals, especially on “Laura,” the band’s first Columbia release and a gold record. 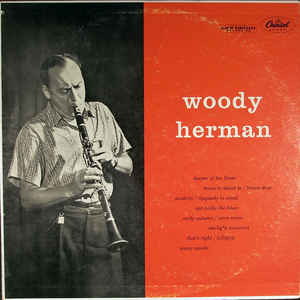 The next Capitol LP is titled simply “Woody Herman,” and dates from the 1948-50 period of the Second Herd, a band that took no prisoners: Don Lamond and Shelly Manne, Lou Levy, Terry Gibbs, Ernie Royal, Serge Chaloff, Gene Ammons, and Al Porcino join the holdovers of Getz, Sims, and Cohn. This band held court at the Royal Roost in New York and pretty much turned it into a parking lot when they were there. 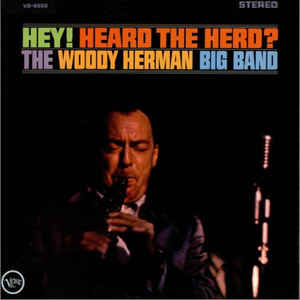 “Hey! Heard The Herd?” is a Verve release of titles recorded for the short-lived Woody Herman Mars label. This is the third herd of the early 1950s, with Sonny Igoe and Art Mardigan on drums, Don Fagerquist and Dick Collins trumpet solos, Carl Fontana, Urbie Green and Frank Rehak trombones, Bill Perkins, Dick Hafer and Arno Marsh tenors, and marks the beginning of Nat Pierce’s tenure with the band. 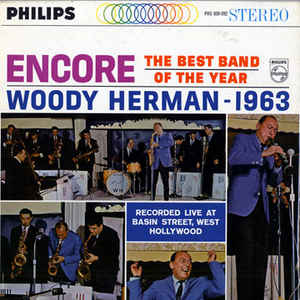 The 1963 LP (framed in my studio) “Encore 1963,” recorded live at Basin Street West is, in my humble opinion, one of the greatest Big Band albums ever recorded. This was The New Swinging Herd, with Nat Pierce as the straw boss and made up largely of Berklee School of Music alumni, Jake Hanna, Phil Wilson, Bill Chase, Paul Fontaine, Gerald Lamy, Bill Perkins, Frank Hittner, Bobby Jones, and the spark plug of the band, tenor saxophonist Sal Nistico. Every lover of Big Band jazz needs to have this one in their collection. 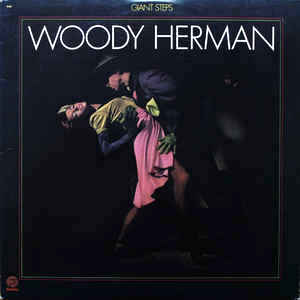 Finally, a band that I was on in early 1973 (my only major regret in my career is that I had to leave the band just two weeks before this gem was recorded), the Grammy award winning LP, “Giant Steps.” As at North Texas State University, in Denton, I again had the honor of sharing the bandstand with the incredible Ed Soph on drums, truly one of music’s all-time top Big Band drummers, and a joy to hang with on and off the bandstand. Also, Greg Herbert, Steve Lederer, and Frank Tiberi, tenors; Larry Pyatt, Walt Blanton, Bill Stapleton, and Woody’s last right-hand man, Bill Byrne, on trumpets; Jim Pugh, trombone soloist; Andy Laverne, piano; and Wayne Darling, bass. The new crop of arrangers, Alan Broadbent, Tony Klatka, and Bill Stapleton, supplied the charts.

There are, of course, so many great Herman albums that could also be listed here, but if you just have these five recordings in your collection, you will be right with the history of the herds. BTW: this is a tribute post to my late, great friend, Al Porcino, who frequently opined, “I am the only musician to have played in all five of the herds.”

Woody Herman, re. “Your Father’s Mustache”: “I’m afraid I’m responsible for this title, me with my stupid sense of humor. I threw in that vocal one night on the job, and it stayed. The melody is Bill Harris’s, and the ensemble is Neal’s, Buddy Rich subs for Davey, and does a tremendous job.”

Dean Pratt has been collecting records, CDs, books, air checks, and tapes featuring jazz, Big Bands, and the Swing Era for six decades. A trumpet player who has been on the road with the best of the Big Bands, and leads his own big band in Manhattan, The Dean Pratt Big Band, Pratt is also frequently called upon by authors for information about the genre, and interviewed as an authority in the field by such networks as NPR. His vast personal jazz collection (some 12,000 LPs, and 10,000 CDs) has also served as an aid in assisting his clients in their search for those who may owe them royalties. Pratt has served as producer, compilation producer, and liner note author for a number of Buddy Rich CDs, including the legendary drummer’s reissues on Pacific Jazz/Blue Note. He has as well acted as conductor, music coordinator, and liner note author for several projects by DMP Records, on which he also made his debut as a vocalist. He is producer, conductor, and liner note author for his own CDs: Groovy Encounters, published by Amosaya Records; and 16 Men & A Chick Singer Swingin’: Pratt Brothers Big Band Featuring Roberta Gambarini, published by CAP Records. Pratt makes his home in South Carolina, but commutes regularly to New York City to rehearse his band.
View all posts by Dean Pratt →
This entry was posted in Uncategorized. Bookmark the permalink. Follow any comments here with the RSS feed for this post. Both comments and trackbacks are currently closed.