“Elephants have been known to remain standing after death until the herd’s matriarch gently tips them over for waiting scavengers. When the bones are chalk white, the herd returns to conclude its rites and purge its storied memories. Unlike humans, elephants do not mummify their dead; they respectfully roll the bones under their feet and go to multiply.”—Skip Eisiminger 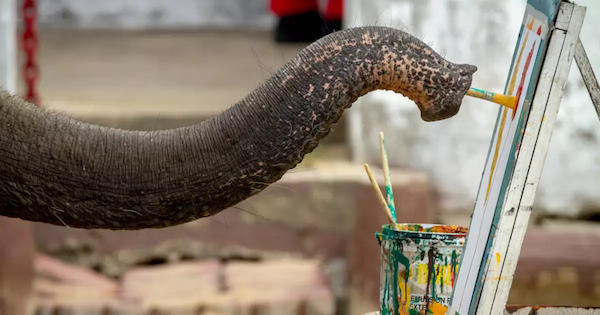 I.  “Nature’s great masterpiece, the elephant; the only harmless great thing.”—John Donne

CLEMSON South Carolina—(Weekly Hubris)—January 2020—Nearing 50 years since we last read to our children at bedtime, I’m not sure whether Babar the elephant or George the chimpanzee was their favorite story-book mammal. I’ll say it was Babar because elephants are the protagonists in two of my favorite stories involving our children and grandchildren.

When our son was about twelve, we took him to a Greenville Little Theater production of “Hamlet.” Before GLT had a theater of its own, they used the city’s old armory, which doubled as a venue for farm-animal shows and circus performances, one of which was scheduled for the approaching weekend. In Act III of this abbreviated production, just prior to the famed play-within-a-play scene wherein Hamlet hopes to trip the conscience of the royal felon, Polonius announced, “The players are here, my lord . . . .” But before he could finish his announcement, an off-stage elephant trumpeted its own royal presence. Unfazed, Polonius continued, “And methinks they have brought their elephants.” Nothing in this pun-filled production received a bigger laugh that evening, and our son was excited, mostly by the prospect of seeing the elephants backstage.

Fast forward 20 years when our son’s two small sons were visiting one summer. One day, four of us decided to visit the small zoo in Greenville where Joy the elephant lived and where her artwork was sold in the gift shop. Joy’s spacious natural enclosure was very close to the zoo’s entrance; thus, as soon as the boys saw her, they raced to get a better view. When Ingrid and I arrived at the barrier “protecting” human visitors, the elephant was standing on a ledge several feet above us. Then without any visible or aural provocation, Joy stuck her prehensile trunk into a steaming pile of excrement and flung it toward my wife. Her aim was so precise, the ten or twelve people standing around her were untouched but, to the boys, Joy was the next best thing to that flying pygmy elephant they’d seen on television. 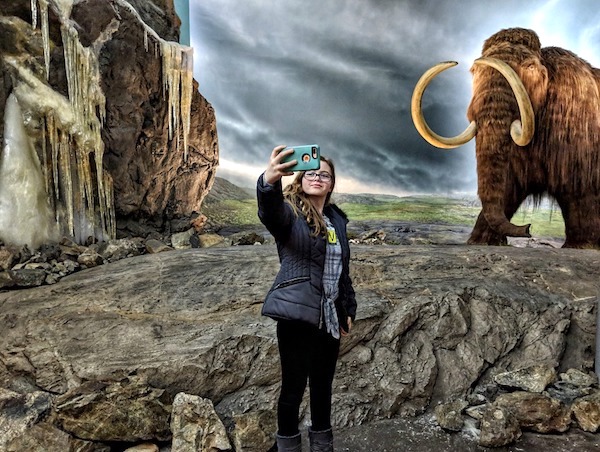 II. “The elephant’s a gentleman.”—Rudyard Kipling

I was astonished to learn that woolly mammoths were roaming Siberia when the pyramids were being constructed along the Nile as recently as 1650 BC. But they were long extinct by Kipling’s day, so the temperament of the elephant’s northern relative is unknown. I’m only guessing that as the animal was pushed into Siberia, and finally onto Wrangel Island off the northeastern coast, it was not at all gentle with those bent on driving their bronze-tipped spears into its flanks.

Humans had no conception of extinction until the late 18th century, when it became clear to taxonomists that mammoth and elephant were not the same species. As the ice retreated from Siberia during warm spells, revealing hundreds of mammoth carcasses, their “ice ivory” became one of this desolate area’s most valuable exports: approximately a hundred pairs of tusks have been legally shipped annually for two hundred years (price in 2019: about $500 per pound), and it’s estimated that ten million carcasses remain in the ice.

No animal was better adapted to the cold than the mammoth. In addition to being covered in thick hair and a heavy layer of fat below the skin, the mammoth had a “fur mitten,” or insulated pouch, at the base of its neck. It was here, some think, that the animal could thaw ice for later drinking or warm the hairless tip of its sensitive trunk. Humans dependent on the animal not only ate its flesh, but dressed in its skins, and built 250-foot2 huts from its bones. Indeed, the Mongol king once perched on a bleached-white throne constructed of the over-developed upper incisors of Asian mammoths.

But the conclusion to the mammoth’s story may not have been written. In 2013, a nearly intact adult mammoth was discovered in the Siberian ice with enough viable DNA that scientists may be able to resurrect one via an Asian surrogate. We can only hope.

III. “Who rides on a tiger can never dismount;/asleep on an elephant, that is repose.”—Marianne Moore

The protagonist of my favorite true animal story is an Asian elephant who was wearing hobble chains to discourage him from leaving his forest employment. When a valuable teak log was snagged in a river, the nearest mahout drove his animal into the water to free it. But before reaching the log, the elephant slipped in a hole invisible to its owner, and its chains became entangled. Though the mahout swam to safety, he was naturally worried that his family’s primary provider might drown. But once he’d reached shore, he noticed that the tip of the animal’s trunk was quivering a few defiant inches above water. Unable to free the animal, the mahout and his co-workers then built a diversion dam upstream to lower the water level. After three days under water, the animal walked to safety once the chains had been unlocked. It then delicately picked up a stick to clean the mud from between its toes after which it shaped a leafy branch to swat the flies.

Given the chance, I think I could watch Marianne Moore’s “templars of Tooth” for hours at a sitting because, as Peter Matthiessen has written, “sooner or later, the elephant will do something very strange such as mow the grass with its toenails or draw the tusks from the rotted carcass of another elephant and carry them off into the bush.” Drawing on the observations of Matthiessen and others who have had the privilege to observe them in the wild, an elephant: 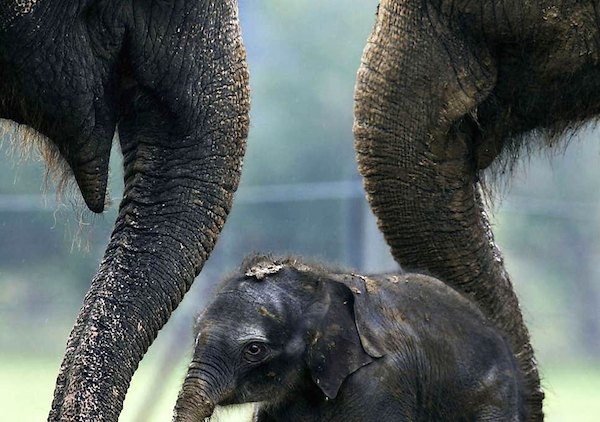 IV. “Elephants love reunions. They recognize one another after years of separation and greet each other with wild, boisterous joy. There’s bellowing and trumpeting, ear flapping, and rubbing. Trunks entwine.”—Jennifer Richard Jacobson

Given an elephant’s eleven-pound brain (the human brain weighs about three pounds), it will not be a surprise that they are self-aware and prescient. In one heart-wrenching wildlife video, a film crew followed a herd of elephants during a severe drought on the Serengeti Plain. When the herd arrived at a water hole after an exhausting journey, they discovered that the only liquid left was a mud slurry. Quickly assessing the situation, the mother of the herd’s youngest pushed him away from the hole. Instinctively, the other mothers defended her, for the baby was too weak to make it to the next source of water, which might have been just as fouled as the one before them. Shunned by the herd, the baby wandered off into the bush where it was swiftly killed by a pack of hyenas who’d picked up the scent of desperation. Ruthless as this shunning appeared to be, the mother instinctively knew she would have other opportunities to breed. To calm the grieving mother, one of her sisters placed her trunk tenderly in her mouth to calm her.

From the voice alone, elephants can distinguish a human’s gender, age, and ethnicity. They know when various fruit trees are ripe and where the best pasturage lies over an area of a thousand square miles. They stomp out campfires left by careless humans, pick up empty beer cans and place them in trash cans, and if the temperature gets too hot in coastal India, they have an internal compass and altimeter that guides them 8,000 feet up into the Himalayas. 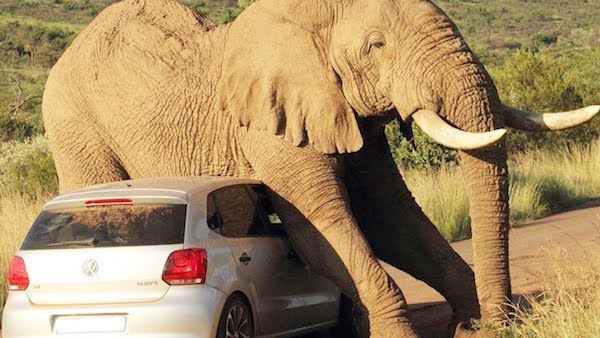 V. “Men are the devils of the earth, and animals are the tormented souls.”—Arnold Schopenhauer

Given the stoic grandeur of nature’s lumbering lords, you’d think humans would have been more appreciative. Instead, we once trained them to carry men over mountains into battle and to crush the heads of condemned criminals. Today, we “break” them as babies and prod the adults with sharp metal hooks. We slaughter them to turn their feet into umbrella stands and their tusks into billiard balls. Their thick skin serves them well around their human overseers. But occasionally, they get their revenge. One herd in Thailand sent their largest to block an access road, while the rest helped themselves to a truckload of sugarcane.

Elephants have been known to remain standing after death until the herd’s matriarch gently tips them over for waiting scavengers. When the bones are chalk white, the herd returns to conclude its rites and purge its storied memories. Unlike humans, elephants do not mummify their dead; they respectfully roll the bones under their feet and go to multiply.