A Conversation with Leaves

“And what the leaves told me, now that I was listening, was that I have it all wrong. Leaves are not part of the trees and shrubs that grow them. They only live there for a while. The willows and alders waken in the spring and their buds break and the leaves emerge, but it’s a relationship not unlike raising a child; eventually that child will grow up and leave. I wonder if that’s an accident of the English language or an insight hidden in plain sight: leaves leave.”—Kevin Van Tighem 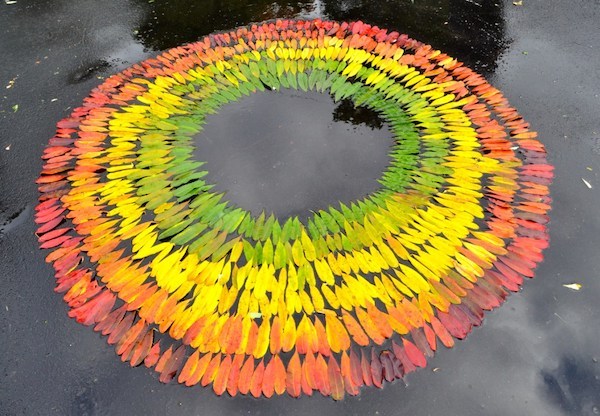 “The young and the old are linked in one long breath, an inhalation that calls for reciprocal exhalation, nourishing the common root from which they both arose. New leaf to old, old to new, mother to daughter—mutuality endures. I am consoled by the lesson of lilies.”―Robin Wall Kimmerer, Braiding Sweetgrass: Indigenous Wisdom, Scientific Knowledge and the Teachings of Plants

COWLEY, ALBERTA Canada—(Weekly Hubris)—November 1, 2021—Today’s observation: alder leaves float on their backs, like tiny arks that forgot to load their passengers, while willow leaves float on their stomachs, like overturned canoes. This insight, of perhaps no great significance, offered itself up to me as I sat on a tired old lawn chair this morning, nursing my second cup of coffee, joining into the river conversation as attentively as I could. It can be hard to hear what’s being discussed, because of all the background noise in one’s human brain, but it’s worth the effort.

The day began at six when, in spite of the dark and the warmth of my bed, it became clear that sleep was no longer an option. The usual morning regime: start the coffee, light the fire, doom-scroll over breakfast. Normally, I have that second cup of coffee while relaxing in front of the stove but it was unexpectedly calm outside this morning and the yard is full of leaves. My composting obsession sent me outside after the first cup, the sun little more than a glowing rumor behind the hill above the cabin.

I raked poplar leaves out of the prairie grass at the edge of the lawn and scraped Manitoba maple leaves into crinkly piles, then fired up the lawn mower and mulched the leaf-drifts into crumbs.

The compost pile is a blend of cattle manure, lawn clippings, leaves, and kitchen scraps. Nematodes and worms are hard at work inside, along with an array of fungi, bacteria, and other organisms that we humans call decomposers. I’m sure they don’t see themselves that way; they probably call us feeders and consider themselves the finest end-result of evolution. It’s how all we living things regard ourselves; it’s in the wiring, really. Regardless of who’s on first, however, I did my bit. I pulled the pile apart, mixed the newly-mulched leaves into it, and shoved it back into its bin, nicely blended. Next spring, it will be ready to waken the tired garden soil.

This is what Wendell Berry and Aldo Leopold would call husbandry, and Robin Wall Kimmerer would describe as reciprocity, and they would almost certainly approve. Its end product is food, earned honestly. In the short term, it yielded only a sore back and tired arms, so I poured that second cup of coffee and, feeling virtuous, went down to where the morning sun slants bright across the daybreak river. 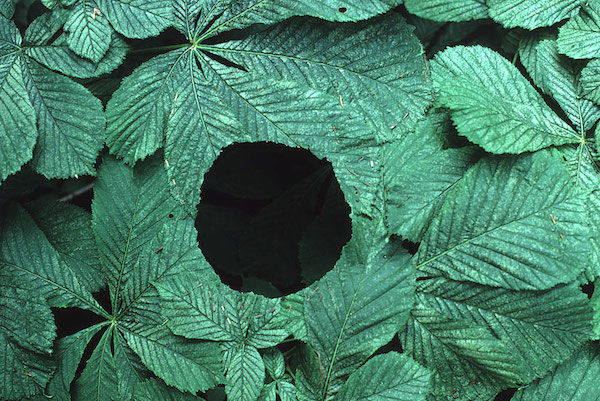 My chair spends much of the summer in the river because that’s the place to be when the weather is hot. In October, it retreats to a small gap among the willows, trampled by nocturnal beavers who thin the thickets and sometimes, testing my professed love for them, fell the old cottonwoods. Today the morning chill was tempered by the warmth of the rising sun that turned all the willows brilliant in their golds and fading greens. I sat and watched the river being a river, and that was when I saw the floating leaves.

Beside me: living leaves clinging to slender willow stems; below: dead leaves sailing downstream, snagging against protruding cobbles, dancing briefly before breaking free to ride the current down to the next obstacle and repeat the process all over again. Some fail to escape and, trapped in eddies, become incorporated into sodden rafts of former foliage, sinking slowly under the surface as other leaves sail blithely past as if they, too, aren’t doomed to eventual drowning.

And what the leaves told me, now that I was listening, was that I have it all wrong. Leaves are not part of the trees and shrubs that grow them. They only live there for a while. The willows and alders waken in the spring and their buds break and the leaves emerge, but it’s a relationship not unlike raising a child; eventually that child will grow up and leave. I wonder if that’s an accident of the English language or an insight hidden in plain sight: leaves leave.

I can imagine the conversation between willow and leaf:

“You worked hard this summer. My buds are fully grown and my root stores are full. I’m full and happy. And drowsy. If you want to go, that’s fine with me.”

“It’s been good hanging out with you, but I have other work to do. Are you sure you won’t miss me?”

That conversation starts in September and gives rise to one last team effort. Willow stem and willow leaves together build a wall of corky cells between themselves, and as those cells thicken, they cut off the flow of water and sap between the parent plant and each leaf. As the bond weakens, the leaves kill their chlorophyll because it’s no longer needed. That was summer work, and summer is past. Without the green of chlorophyll to mask them, other pigments reveal themselves — mostly yellow ones but sometimes red or orange or purple.

“It won’t last. It never does. But thanks. Look how well it hides the kinglets.” 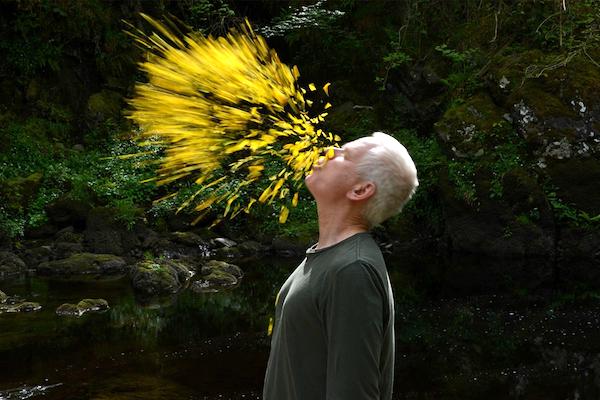 And then the leaves fall, and their next work begins. Some are making compost in the garden; that’s work I assigned them, but it’s work they understand. It’s essentially the same work they do when left to their own devices, becoming duff on the forest floor or growing sodden in a shrunken river’s back eddies, feeding bacteria and fungi and invertebrates as they settle to the bottom and decompose.

In the spring it might seem that they are gone, but a million quiet whispers say: “We are still here; we’re still doing our work.” And when those voices fade at last into the green chatter of summer, a new chorus of younger leaf voices rustles in the wind overhead and the conversation renews itself. Like our conversations about weather and crops and politics. We all have the same conversations over and over again; it’s comforting, in a way. It’s the living hum of community.

They say it’s not good for one’s mental health to spend too much time alone, but it’s a habit I have grown more attached to with each passing year. So maybe that’s the reason for such early morning fancies, inventing conversations between twig and leaf, hearing stories in the river chatter. I’m losing my mind to solitude.

Or maybe this isn’t alone time at all; maybe this is how one connects to the rest of one’s community. Maybe the conversations I imagine are close to what is really being said by the neighbors who live down along the river. There is far more intelligence and purpose in the world than ours, after all. It may be—in fact, I think it is—that we are most profoundly alone when we tune them out. All that human noise, all the hubbub, drowns out things we should, perhaps, be listening to more closely.

Of course, willows and alders and rivers aren’t sentient, right? They don’t have intelligence; they don’t think. That’s our schtick. They just respond to changes in day length and rain and wind and the things animals do to them. When those beavers snip them down, shrubs don’t feel a thing; they just re-sprout. It’s just stimulus-response.

But if we’re honest, we have to acknowledge that that’s all that human thought is, too: chemical reactions and electro-magnetic impulses processed in response to environmental stimuli. Which also defines the process of leaf formation and leaf drop. And the processes by which bacteria and algae attach themselves to leaves and turn them into organic fragments and chemicals. And the processes by which roots find those bits and send them pulsing back up the stems of willows and alders and poplars to renew that cycle.

Or, the processes by which gardeners renew the soil with compost to create the magic of food, which keeps us alive and sends us down to the river on still October mornings, to watch the leaves float by and eavesdrop on conversations among the neighbors. Trying to divine the intelligence that surrounds us, in hopes, perhaps, of deepening our own.

We aren’t so smart. And they aren’t so dumb. And a community is something made out of conversations. Which is why I feel no embarrassment about having listened in on the willow talk and reporting what I might have heard. 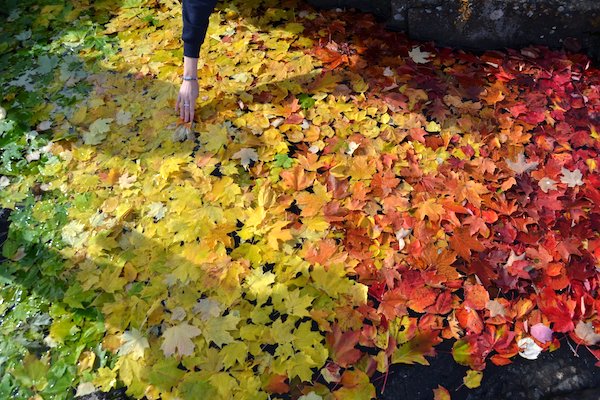 Kevin Van Tighem, a former superintendent of Banff National Park, has written more than 200 articles, stories, and essays on conservation and wildlife which have garnered him many awards, including Western Magazine awards, Outdoor Writers of Canada book and magazine awards, and the Journey Award for Fiction. He is the author of Bears Without Fear, The Homeward Wolf, Heart Waters: Sources of the Bow River, Our Place: Changing the Nature of Alberta, and Wild Roses Are Worth It: Alberta Reconsidered. Van Tighem was born and reared in Calgary, his family roots in what is now Alberta going back to 1875. He graduated with a degree in plant ecology from the University of Calgary in 1977 and went on to work as a biologist with the Canadian Wildlife Service. In 1985, Van Tighem joined Parks Canada and subsequently worked in various national parks before retiring as a park superintendent in 2011. Van Tighem is the author of 14 books on wildlife and conservation, and writes a regular column, “This Land”, in Alberta Views: The Magazine for Engaged Citizens. He lives with his wife, Gail, in Cowley, Alberta. Read more about the author here. Find Van Tighem’s books here.
View all posts by Kevin Van Tighem →
This entry was posted in Uncategorized. Bookmark the permalink. Follow any comments here with the RSS feed for this post. Post a comment or leave a trackback: Trackback URL.