“The minute we dock, you don’t know me anymore. I won’t even look at you. I have to return to the House of Fear. Promise me you’ll never live there.” Burt Kempner

“The House of Fear: A Shipboard Romance” 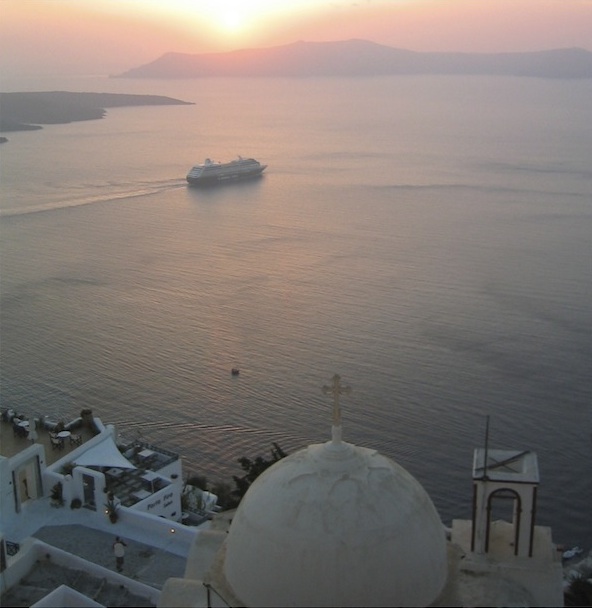 Any port in an emotional storm.

Back in 1977, I received a dream assignment from a travel magazine. They were doing a special issue on Greece. The editor was going to cover the mainland and he asked me if I’d like to report on the Islands. We agreed to meet in Athens to make our final plans. I showed up at his hotel room at the appointed hour and knew right away that something was very wrong. The room was littered with those tiny whisky bottles found in service bars, and he was quite drunk, although it was only 10:00 in the morning. “Is there a problem?” I asked. Without a word he handed me a telegram. It was from his publisher, informing him that the magazine had been hemorrhaging money and he had no choice but to shut it down. We were on our own. They’d paid for a round-trip ticket, but I was damned if I was going to come all this way just to take the first flight back to Philadelphia. I wired my bank to see how much money I had left in my checking account: $900. I decided to see how long and how far $800 of it would take me (five weeks and very far, as it turned out). Bidding the tipsy ex-editor farewell, I took my leave of Athens.

For the next few weeks I skipped from island to island, meeting new people, seeing new sights and enjoying myself immensely. It began registering in my consciousness that I had constantly been seeing the same woman wherever I went: on ferry boats, at outdoor cafes, at the marketplace. She was in her late 30s, with curly blonde hair, very attractive, always by herself and with a severe look that made people keep their distance. At first I thought there was something in her that frightened people, but then I realized that it was she who was frightened of them. One day on a boat in the middle of the Aegean Sea, I approached her and said, “I can’t speak for the others, but you have no cause to be scared of me.” She laughed. Like many people who don’t smile often, her smile utterly transformed her face. Her name was Karin and she was German. For the next couple of weeks we were together all the time, on Ios, Kos and Santorini. I can’t assign the blinding white-washed walls, blue shutters or rocky coastlines to any one place anymore: they all blend in now. I do remember the incessant firecrackers Easter week, the girl running up to us to give us flowers and the scandalized hotel clerk who made us take separate rooms and stood guard outside your door, never suspecting you’d climbed in my window.

The time came for us to return to Athens and home. As the boat pulled into the harbor at Piraeus, she turned to me and said: “The minute we dock, you don’t know me anymore. I won’t even look at you. I have to return to the House of Fear. Promise me you’ll never live there.”

We collected out bags. I went out to find a taxi. She got into a black Rolls-Royce. My German was pretty fluent back then, so I know I heard the driver correctly when he said, “Did the Countess enjoy her holiday?” I tried to catch her eye as the car pulled away, but, true to her word, she didn’t even glance at me, and true to mine, while I have dropped in from time to time, I have never taken up residence in the House of Fear.

“Victory at Sea or Bellying up to the U-S-A!-Buffet”

“One last time, Boys, and let’s show some real spirit: ‘U-S-A! U-S-A!’ The ship’s whistle blew, swallowing the cheer whole. One bald Ohioan peered darkly at the captain’s bridge. ‘This is a Dutch ship,’ he said. ‘Let’s all remember that.’” Burt Kempner 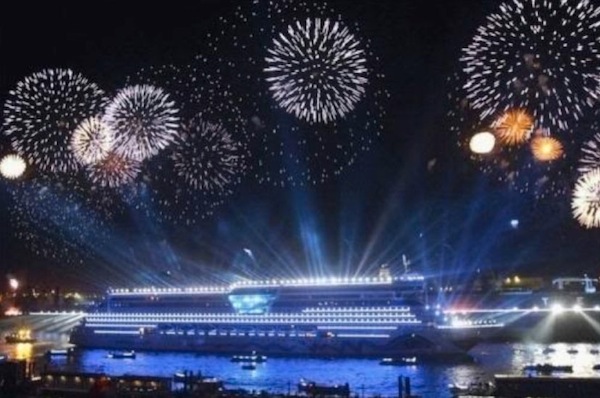 This was not the Love Boat.

War broke out the day the cruise ship entered the Caribbean Sea. The Americans aboard clustered together poolside, at the buffet tables and in bars strategically located throughout the vessel to follow the action. There was a news blackout in the casino, which never knew darkness. Impromptu chants of “U-S-A! U-S-A!” broke out in the dining hall, in early and late seatings alike. There was widespread confidence voiced that the whole thing would be wrapped up within a week. The ship docked in Mexico.

The Americans issued down the gangplank a little nervously, as though unsure if they would be met with a cheery “Buenas dias!” by their hosts or a hail of stones. Some fingered dollar bills like amulets. They needn’t have bothered. Their Cozumelian cousins were only too happy to accommodate the newcomers. “This way to the jeep safari!” “Shopping tour line up here!” “See the ruins!” At dinner that evening they recounted their adventures ashore. The consensus was that Mexicans were all right. Shop girls and taxi drivers expressed certainty that the Americans would win any day now.

The people of Nassau and Grand Cayman Island were similarly impressed by America’s military might. Some offered special discounts because “U.S. good people, Mon, fight for freedom.” The tourists came back aboard with their arms stuffed with bargains. The natives were crafty, but no match for the God-favored sons and daughters of Michigan, Nevada and New Jersey.

Five days later. The war news was good. The ship pulled into port in Miami. The weary, sun-burned, well-fed passengers disembarked. A sizable knot of Americans gathered on the dock. One last time, Boys, and let’s show some real spirit: “U-S-A! U-S-A!” The ship’s whistle blew, swallowing the cheer whole.

One bald Ohioan peered darkly at the captain’s bridge. “This is a Dutch ship,” he said. “Let’s all remember that.” They made a show of marching in proud formation to the parking garage. No comments issued from the impassive faces of the ship’s crew. Reinforcements were already starting to gather in the terminal, and on TV monitor after monitor, beaming, immaculate readers declared that victory was at hand.

“Iceberg: A premonition of War”

“We know now that, no matter what we’re told, we will strike the iceberg. It is inevitable and there is nothing we can do about it. Absolutely nothing.” Burt Kempner 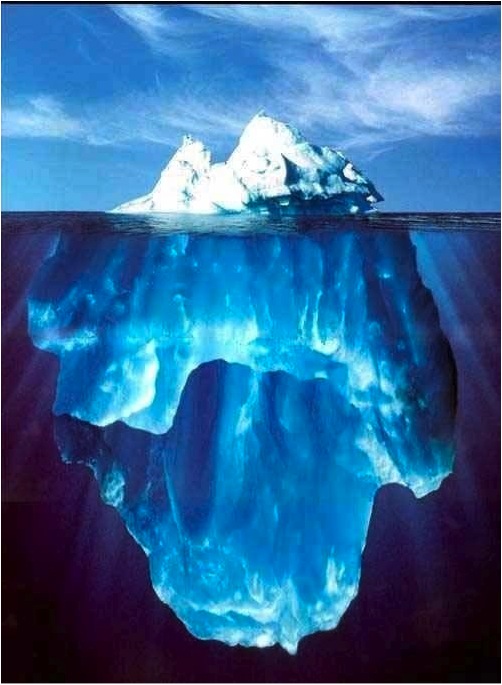 That white thing over there? What is it? A sail?

We are on a luxury liner equipped with every convenience a modern traveler could desire. We can climb rocks, eat haggis, call our brokers, and dance under the stars. There are no Somali pirates here, no bird-killing, oily froth. We are equally comforted by the churning of the sea and the groaning of the buffet tables.

A few of us spot a glimpse of white far in the distance. We argue about what it could be. We flag down a waiter.

“That white thing over there? What it is it? A sail?”

“Over there? That thing? Iceberg. No big deal. No problem.”

There is silence. According to what all the experts say, there shouldn’t be an iceberg within 500 miles of here.

We accost a bartender, order some gin fizzes and demand that he send someone from the bridge down to talk with us.

“We’re heading toward an iceberg!”

“We’re well aware of that, Ladies and Gentlemen. We have an enormous amount of time to make course corrections and we will. There is no cause for worry. Go back to enjoying yourselves, please.”

The ship continues unswervingly on its path. Our laughter still comes, but it’s of the nervous variety. We know now that, no matter what we’re told, we will strike the iceberg. It is inevitable and there is nothing we can do about it. Absolutely nothing.

Another waiter rushes by with a huge tray of drinks. We steal them.

Burt Kempner has worked as a scriptwriter in New York, Philadelphia, Washington, DC, and Florida. His work has won numerous major awards, and has been seen by groups ranging in size from a national television audience in the United States to a half-dozen Maori chieftains in New Zealand. His documentaries have appeared on PBS, the Discovery Channel, the History Channel, CNBC, and European and Asian TV networks. He has two dogs, a cat, a wife and a son and is randomly kind to them all. More recently, Kempner has written three rather subversive books for children: Larry the Lazy Blue Whale, Monty the Movie Star Moose and The Five Fierce Tigers of Rosa Martinez. Visit his Amazon author page: amazon.com/author/burtkempner
View all posts by Burt Kempner →
This entry was posted in Uncategorized. Bookmark the permalink. Follow any comments here with the RSS feed for this post. Post a comment or leave a trackback: Trackback URL.