“The nameless woman of Luke 7—labeled sinful—is a precious, bold illustration of the disturbing discoveries inherent in discipleship. Her ears are fixed on the ministry of Jesus, and she is inspired to hear in a manner that many of her peers do not understand. She stands with Jesus and where she stands in relation to him determines her definition of extravagance.” —Robin White 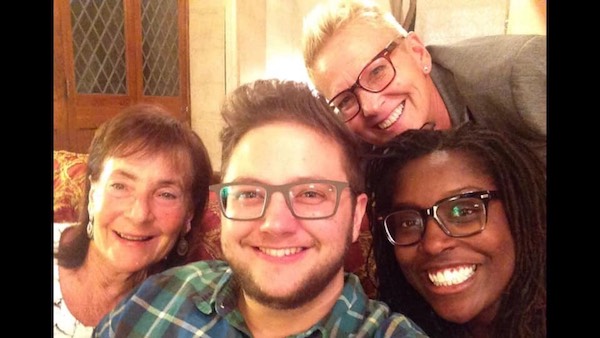 The nameless woman of Luke 7—labeled “sinful”—is a precious, bold illustration of the “disturbing discoveries” inherent in discipleship.

Her ears are fixed on the ministry of Jesus, and she is inspired to hear in a manner that many of her peers do not understand. She stands with Jesus and where she stands in relation to him determines her definition of extravagance. What she does also determines, defines, who she is. I find it ironic that she is described in Luke’s story as “sinful”—which is what she may well have been, once, but is not who she is, who she has become.

What she does in those few moments in Simon’s house says everything about who she has become.

Luke says, “Behold, a woman of the city who was a sinner . . .” The word “behold” indicates that something unusual or surprising or, in this case, disturbing, is about to happen.

“Behold, a woman . . .”  This is the first disturbing surprise. Not only is the visitor sinful, but she is a woman, and one who shows up unannounced and unexpected. She is not one of Simon’s guests: her mere presence, as a “sinner,” would certainly have defiled the house of this Pharisee.

“Behold,” the next disturbing surprise is her behavior once she enters into the presence of Jesus.

Letting down her hair, she kisses and anoints his feet; wetting, washing them with her tears, and drying them with her locks. In those days, the offering of water for foot washing was an act of ritual hospitality. Remember Abraham in Genesis 18, providing water for the three “angel” guests who visit him by the oaks of Mamre? Abraham models, with the angels, the Jewish tradition of hospitality—one of whose expected elements Simon the Pharisee has omitted.

Kissing Jesus’ feet is an expression of intimacy, one that is usually linked, in scripture, with an abject expression of gratitude for a pardon, and abasement before the one who has pardoned. This woman in Luke comes prepared for her mission, bearing precious perfume. She has not just happened into Simon’s house by mistake: she is intent on doing what she does.

New Testament Scholar and Preacher Fred Craddock says this about the text: The reader is inclined to see in the story one sharp contrast, that which is so evident between Simon and Jesus.  Here are two religious leaders suddenly in the presence of a sinful woman. One has an understanding of righteousness which causes him to distance himself from her; the other understands righteousness to mean moving toward her with forgiveness and a blessing of peace.  However, the context should have alerted us that the contrast Luke has in mind is between Simon and the woman in their response to Jesus. They make specific the earlier statement to the effect that sinners receive, and Pharisees reject, the purpose offered Jesus. The irony is that even though Jesus is a guest in Simon’s home, it is the sinner who extends the hospitality.”

Simon is shocked at Jesus’ inability to discern the sinful nature of the woman and this is proof to the Pharisee that Jesus lacks prophetic power. Yet, the irony is that Jesus does display prophetic powers, as he discerns Simon’s thoughts on the matter. Even though Simon is speaking to himself, Jesus intuits his concealed revulsion, indeed, his hypocrisy, and, in response, tells a riddle.

Employing the analogy of a patron and his debtors, Jesus asks which of these two feels a greater sense of gratitude, a debtor who is forgiven a larger amount, or one forgiven a lesser amount. Once Simon offers his answer, Jesus presses the point home: contrasting the woman’s extravagant greeting of her beloved and revered rabbi with the traditional, expected behaviors denied an honored guest by Simon: foot washing, a kiss of welcome, and the oil of blessing.  Jesus makes plain the transformation of the woman-formerly-a-sinner: she is the true and welcoming host, not the Pharisee.

I think one of the most powerful illustrations of this kind of transformation comes in Victor Hugo’s novel, Les Misérables.

After spending 19 years in jail for stealing a loaf of bread, Jean Valjean is released, only to find himself wandering aimlessly through the bitter cold as he is repeatedly refused shelter. Valjean finally finds hospitality when Bishop Myriel welcomes him into his home and seats him at his dinner table, then provides him a bed for the night. Valjean repays the Bishop for this kindness by absconding in the night and stealing his silver.

After being apprehended by the police, Valjean is returned, with the stolen silver, to the Bishop’s home. In one of the most moving moments in Western literature, the Bishop protects the thief by telling the authorities that he had given Valjean the silver as a gift.  Further, Bishop

Myriel chastises Valjean for not taking the silver candlesticks as well, and sends Valjean on his way with the entire silver trove, exhorting him to become, from that day forward, an honest man.

“Do not forget, do not ever forget,” says the Bishop, “that you have promised me to use the money to make yourself an honest man.”

Valjean, who does not recall having made any promise, is silent. The Bishop has spoken the words slowly and deliberately. He concludes with solemn emphasis: “Jean Valjean, my brother, you no longer belong to what is evil but to what is good. I have bought your soul to save it from black thoughts and the spirit of perdition, and I give it to God.”

Of course, this single act of extravagant love and forgiveness for a perfect stranger changes the course of Valjean’s life.

The woman, labeled a “sinner” in Luke’s story loves extravagantly—just as the Bishop loves

extravagantly—because of the extravagant forgiveness and love she has already experienced in the presence of Jesus.

Because of this, she bursts into the dinner party to express her boundless joy and gratitude. Paradoxically, her “disturbing behavior” embodies hospitality at a deep and significant level.

I want to tell you about my friend, The Reverend Dr. Ilene Brenner Dunn, who died a week ago of breast cancer[https://www.legacy.com/obituaries/sanantonio/obituary.aspx?n=ilene-brenner-dunn&pid=192830174&fhid=5106].

Ilene was a Presbyterian minister, serving churches in Texas. She was a member of the National More Light Presbyterians at the time I was serving as Co-Moderator. When the MLP board had one if its meetings in Austin, Ilene sprang into action. Her hospitality was astounding to me. No detail went unnoticed. One night, we had dinner in an amazing southwestern restaurant. At each place setting, was a gift bag. In the place on the handle of the bag where often a ribbon is tied, Ilene had tied rainbow colored bandanas. Each gift bag contained memorabilia from the Austin area.

Much of Ilene’s most meaningful work occurred outside the walls of church buildings, focusing on social justice. Hers was a voice for marginalized populations, giving voice to those who are unheard. Two decades before discussions reached governing bodies of the Presbyterian Church, Ilene risked her own ministry to support the rights of the GLBTQ population to hold leadership roles in churches a cause and a population to which she dedicated many of her efforts. In 2006 a complaint against Ilene was filed to the local Mission Presbytery expressing dissatisfaction over her ordination of gay and lesbian church members as elders.

As she faced a Stage-4 cancer diagnosis in 2016, Ilene did not let chemotherapy and subsequent cancer treatments prevent her from advocating for what was right. She “marched” in a wheelchair during the women’s rights marches. Later, unable to attend events, she took to social media, writing thought-provoking pieces that were followed and admired by so many of us.

Her hospitality, her behavior, was a response to who she listened to—Jesus, and where she stood—following Jesus.

The wise Fred Craddock writes: “We speak and act in ways we think most appropriate for the occasion. We may never know, however, what lives are influenced, what differences are made because God takes a word spoken, a gift given, a hand extended, an effort expanded, and gives it a life and power far beyond the intention and expectation that prompted it.”

My friends, the nameless woman in Luke’s gospel, and my beloved Ilene, are precious, courageous illustrations of “the disturbing discoveries” inherent in discipleship. May we all strive to be so bold, and so extravagantly grateful.

And For No Reason

And
For no reason
I start skipping like a child.

And
For no reason
I turn into a leaf
That is carried so high
I kiss the sun’s mouth
And dissolve.

And
For no reason
A thousand birds
Choose my head for a conference table,
Start passing their
Cups of wine
And their wild songbooks all around.

And
For every reason in existence
I begin to eternally,
To eternally laugh and love!

When I turn into a leaf
And start dancing,
I run to kiss our beautiful Friend
And I dissolve in the Truth
That I Am.

The Rev. Robin Kaye White grew up in a farming community in Central New York State: she is descended, on both sides of her family, from dairy farmers, and is most alive, still, in rural North American landscapes. A voice major, she studied Music at Ithaca College; then earned her MDiv at Lancaster Theological Seminary and did graduate work at Princeton Seminary and The Theological Institute of Advanced Theological Research in Jerusalem, Israel. Ordained in the Presbyterian Church (USA), White was recently a Co-Moderator of the National Board of More Light Presbyterians. White is passionate about liturgy—“the work of the people”—and preaching. In her sermons, she strives to illuminate the original context of scripture and tease out its messages for the fraught present. She has had the privilege of “holding space” for the dying and their loved ones and experiences this ministry of presence as a gift: she is most willing to go with people as they journey to desert places. She states: “I have lived my life by adhering to Paul’s words in his letter to the church at Rome, ‘Rejoice with those who rejoice and weep with those who weep.’” She is just as likely, though, to quote Rachel Held Evans as St. Paul: “This is what God’s kingdom is like: a bunch of outcasts and oddballs gathered at a table, not because they are rich or worthy or good, but because they are hungry, because they said yes. And there’s always room for more.” A Lesbian-Pescaterian-Presbyterian, Reverend White is most alive out of doors, whether hiking, biking, kayaking, golfing . . . or just sitting on a rock. (Banner and Author photos by E.B.-Herring, taken at Pendleton SC's Liberty Hall Bed & Breakfast.)
View all posts by Robin White →
This entry was posted in Uncategorized. Bookmark the permalink. Follow any comments here with the RSS feed for this post. Both comments and trackbacks are currently closed.

One Response to An Extravagance of the Heart: Luke 7:36-50