“One sunny day, we sat on the grass across the road and made black pencil studies of the cherry tree. Shadows took on new meaning for Emma that day. When I finally painted the tree in the winter, my pencil study became the basis for this oil painting.”—Meredith d’Ambrosio

Note: D’Ambrosio’s upcoming museum-exhibition will run from November 15, 2015 till February 14, 2016 at the Art Complex Museum of Duxbury MA. At the November 15 Reception, D’Ambrosio will be performing with jazz pianist Chris Taylor. 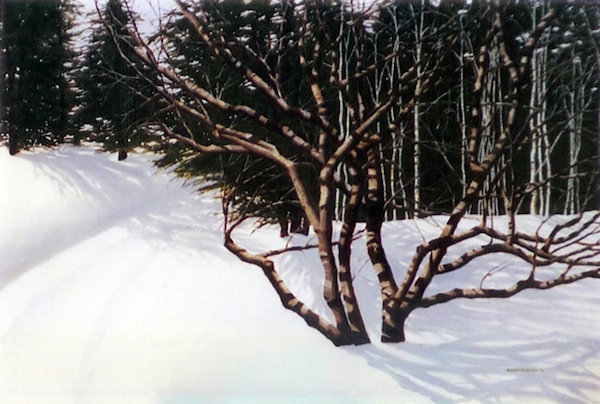 In the summertime, when my granddaughter Emma came to visit, we would venture off Daniels Island to walk to Popponesset Spit—the tail end of Popponesset Beach. On the way, we would marvel at the old cherry tree as we came around the bend on our shortcut to the spit. One sunny day, we sat on the grass across the road and made black pencil studies of the cherry tree. Shadows took on new meaning for Emma that day. When I finally painted the tree in the winter, my pencil study became the basis for this oil painting. 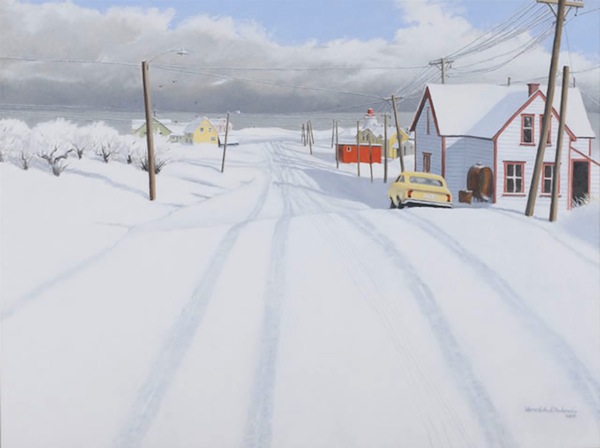 My companion and I traveled by car to Bar Harbor, Maine, and drove aboard the Blue Nose for an overnight cruise over a choppy sea. The next morning, we arrived at Halifax, Nova Scotia, where we disembarked and drove off the boat to begin our trek all along the coast, eventually finding our way to Peggy’s Cove. If we’d blinked while driving through the tiny, rustic fishing village, we would have missed most of it. The winding hills and dales of the main road drew me into the scene, but what really caught my eye was the oddly shaped lighthouse. 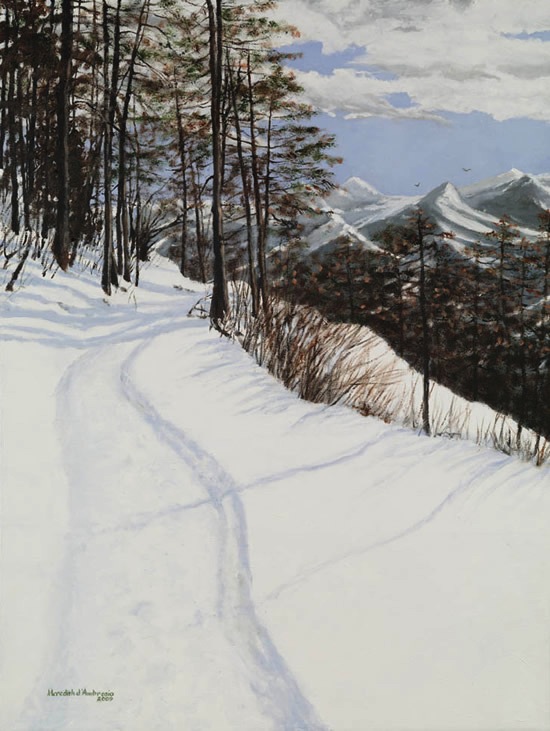 After a concert tour in France, I found my way by train to my sister Elaine’s alpine home among the clouds in Verbier, Switzerland. The next day, we took her Italian Spitz, Theo, for a walk in the snow on a narrow pathway. I learned that, in the far distance, beyond the peaks of Swiss Alps, the farthest range one could see was the French Alps. Suddenly, Theo was distracted by a scent. He bolted over the ridge of the path to explore the remains of a dead animal at the bottom of the steep hillside. We stayed there a long time, trying to coax him away with our calls, but finally gave up and returned home. After realizing that we’d abandoned him, Theo was home three minutes after we arrived.