“Bernanke’s discussion of the failure of the Fed and the Treasury to prevent Lehman’s collapse savors of a legalism that is somewhat inconsistent with the boldness of his many successful central-banking ploys. Equally misguided was his advocacy of using TARP money for bank capital infusions rather than for mortgage modifications.” —Sanford Rose 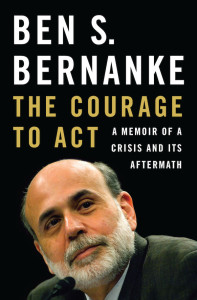 Bernanke: lapidary prose, with a soupçon of waspishness.

He helped pull us out of the financial crisis and recession of 2007-2009 by employing some of history’s most creative and daring central banking maneuvers, thereby earning the gratitude of the nation and designation as Time’s 2009 Person of the Year.

Now he has just produced a memoir, entitled somewhat immodestly but perhaps justifiably, The Courage To Act: A Memoir of a Crisis and its Aftermath.

It is a remarkable read, written with lapidary clarity.

It also contains some choice observations about a few of the great actors of our time.

Thus the Maestro, Alan Greenspan, “. . . was shrewd and knew a remarkable number of esoteric facts, but his thinking was idiosyncratic and less conceptual than I was used to.”

And Sheila Bair, the FDIC chairperson, was “energetic” but far too turf conscious and, by insisting on wiping out the senior debt-holders of Washington Mutual, may have contributed to the demise of Wachovia Bank.

Barney Frank, the father of the eponymous Dodd-Frank law, comes in for a devastating bit of ridicule: When told of the Fed’s plan to lend $85 billion to AIG, he is reported to have asked Bernanke how the central bank would get its hands on that kind of money.

Is it possible that the future head of the House Financial Services Committee was so ignorant of basic monetary economics? (When the Fed lends money or buys securities, it adds bank reserves, which, unless sterilized by offsetting sales of securities, increase the money supply.)

Or is it simply the case that it is dangerous to get on the wrong side of Our Hero—where Frank’s legendarily tart tongue would occasionally have placed him?

But, to become somewhat paralipsistic,* I pass over the fact that Chairman Bernanke may on occasion demonstrate just a soupçon of waspishness.

His record as Fed chair is what counts, and that record, while not unblemished, is still non-pareil.

A couple of years ago, a story surfaced that staffers at the New York Fed had actually concluded in 2008 that Lehman Bros. was marginally solvent and certainly had enough bona-fide collateral to qualify for what is called a Section 13(3) Fed loan, which might have saved it.

Curiously. the report of the New York-Fed study group never reached the desk of Tim Geithner, then the head of the New York Fed—or so Geithner  claims.

Is it possible that both Geithner and Bernanke were ignorant of the report’s contents?

Or is it possible that both were in the process of being steamrolled by Hank Paulson, the Treasury Secretary, who desperately wanted to avoid presiding over another bailout, similar to those of Bear Stearns and the two housing GSEs—the kind of bailout that was immediately implemented for AIG after Lehman’s collapse?

In retrospect, however, even if Lehman was not technically solvent, its pivotal importance to the financial system should have warranted some “bending” of the rules.

Bernanke’s discussion of the failure of the Fed and the Treasury to prevent Lehman’s collapse savors of a legalism that is somewhat inconsistent with the boldness of his many successful central-banking ploys.

Equally misguided was his advocacy of using TARP money for bank capital infusions rather than for mortgage modifications.

Bernanke unquestionably supported mortgage modifications. Indeed, he was one of the first to suggest to banks that they accept short sales.

But he seemed to bow to emerging public (Tea Party) resistance to mortgage-principal forgiveness. And the Fed waited until January 2012 before issuing a staff paper on mortgage reform.

It is beyond question that the failure to forgive mortgage principal greatly aggravated the recession, and, fine economist as he is, Bernanke should have pressed early and relentlessly for something like the following program:

1. Government borrows about trillion dollars from a global market literally panting to give it the money at a trifling cost.

2. Government buys mortgages from banks at book values, provided the banks agree to re-mortgage properties at market values, based on local sales data.

3. Banks agree to pay government back the difference between book and market values, plus interest, on an installment basis, but only starting five years after program inception.

4. Individual mortgagors pay back to the banks half  the difference between the re-mortgaged home value and the greatest of (a) the appreciated value of the property, (b) its realized sales price, or (c) the value of any newly purchased home, again in installments and starting the same five years after inception.

There is little doubt that such a program, by preventing hundreds of thousands of foreclosures, would have increased GDP by far more than the budget outlays needed to implement it. (There is even some question as to whether cash outlays were needed at all. In 1982, the FDIC had created ersatz capital, dubbed net worth certificates, which it infused into capital-short savings banks, with some success and market acceptance. At the onset of the 2007 crisis, some economists and former bank regulators argued that this kind of phantom capital, really a contingent government guarantee, could be re-created.)

Of course, the effort to restructure mortgages was essentially a fiscal problem, and some in Congress criticized even the Fed’s belated 2012 staff paper as an encroachment on legislative prerogatives.

Still, Bernanke’s growing prestige as a monetary miracle man would certainly have positioned him to champion this type of comprehensive solution.

*Editor’s Note: For readers interested in a humorous little digression spurred by Sanford Rose’s use, above, of the term “paralipsistic,” please click on to https://wordworry.wordpress.com/2014/12/04/no-need-to-mention-my-opponents-drinking-problem/. (In brief: “Paralipsis is a form of apophasis, a general rhetorical device where I can raise a subject by either denying it or denying that it should be brought up. It’s a first cousin to irony.”)