Baobabia: In Honor of an Ancient & Venerable Tree

“People in Africa and Madagascar live and work inside baobab trees. No wonder the Little Prince was worried. The age of a single tree can’t be counted with rings, because it doesn’t have any, but ‘a thousand years’ is considered a reasonable average. And if there is such thing as a normal-looking tree, the baobab is having none of it.” Anita Sullivan 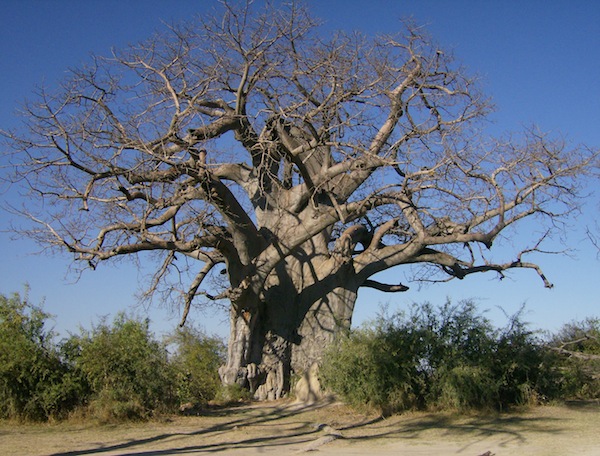 EUGENE Oregon—(Weekly Hubris)—2/18/2013—One day in a bookstore I spotted a title, The Remarkable Baobab and, because I’ve always loved Antoine De Saint-Exupéry’s story about the Little Prince whose small planet is in mortal danger of destruction from baobab seeds, I snatched the book off the shelf. The photographs, by Thomas Pakenham, an Oxford-educated Irish nobleman, were so beautiful they broke my heart. Like Pakenham, I too fell totally in love with these strange and marvelous trees, and I hope not to depart this earth without having personally met at least one of them.

Pakenham says I must hurry, since their numbers are rapidly dwindling to make room for cattle and crops.

The baobab used to be highly valuable simply for its usefulness: the bark can be rope, cloth, or roof tiles; the blossoms, leaves and seeds are highly nutritious; the outer shells can be drinking vessels. But above all that, the tree is obviously worthy and amazing for its age, size, and ability to thrive where other plants find it difficult to live. “It’s like the salamander that revels in the fire. The baobab puffs itself up to a gigantic size, to become one of the largest living things in the world, where other plants would wither and die,” writes Pakenham.

People in Africa and Madagascar live and work inside baobab trees. No wonder the Little Prince was worried. The age of a single tree can’t be counted with rings, because it doesn’t have any, but “a thousand years” is considered a reasonable average. And if there is such thing as a normal-looking tree, the baobab is having none of it.

Here is my small paean to this tree:

O for a world based on baobabs!

Underneath-branches would be our primary way of doing things.

Light would come from a different place not so much from above. The sun would be relegated, yes, a relegated sun.

So much light originates within the bark, the boles, the substance of these trees.

More vast, as if every one of the finite shades of red were peeling off the trunks and slipping into the ground too fast for us to count and this kept us breathless. Also, cautious so that we had to set aside a special section of our hearts for counting, lest they would fill up too fast and drown.

These trees are innately upside down, and so seem comic. Maybe this is their way of being truly serious. Their roots are on their heads, as hearts are on sleeves.

Just knowing they were abundantly hither and yon would so lighten our lives that we would be accustomed to walking beneath our floating hearts.

We would feed cucumbers to the baobabs by raising our arms as high as we could with a slice sticking out between thumb and index finger.

Such helpful acts are essential, lest we become like collapsed stars.

The hillsides would be pricked out with those uncle baobabs who are shaped like people without waists.

The trees seem not to be natives of Earth, but have been here so long one wonders why they never caught on. Whatever they are natives of seems much better.

Their roots shamelessly splay themselves around the trunks: sometimes pretending to be lowbranches; other times such a contortion on the red soil, they might be creatures of torso and legs only, taking a nap.

If the roots are above ground, what holds up the trees—something else entirely?

Their trunks are full of pocks, sagging knobs, wrinkles, blob-like add-ons as if ancient children stood with buckets for hours and threw handfuls of plaster, which were welcomed cheerfully as ballast. The trees are contused. Somehow this gives comfort to the rest of us, trying so hard to remain smooth.

Baobabs are said to live in herds. Elephants strip and eat their bark, and in the process heedlessly metamorphose into trees, over and over. But baobabs are never elephants standing still.

Whatever they are, their vulnerability shows up in how they eat light when it moves horizontally through the land like flame in the grasses. Such an appetite is terrifying for them, who already have light enough of their own.

3 Responses to Baobabia: In Honor of an Ancient & Venerable Tree