“The bear is in love: you can see it by the curve of his left wrist as he holds the watering can over the stream, concentrating so that each pad will receive the right amount of water from the silvery shower that descends so intimately from its spout.” Anita Sullivan 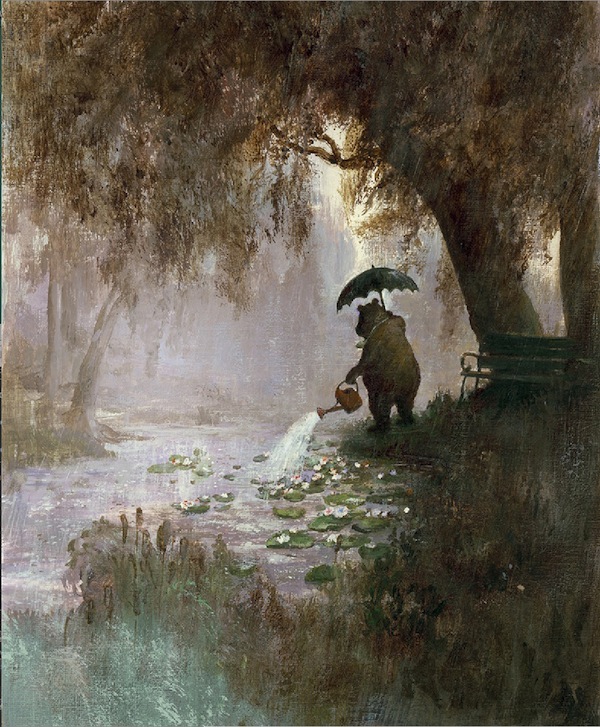 Bear in love, with watering can.

EUGENE Oregon—(Weekly Hubris)—9/10/2012—A bear is watering lily pads in the rain. With his right paw, he holds an umbrella over his head. The lily pads are already wet on both sides, from the river and from the light drizzle misting down through the trees. The bear is in love: you can see it by the curve of his left wrist as he holds the watering can over the stream, concentrating so that each pad will receive the right amount of water from the silvery shower that descends so intimately from its spout.

If this were happening in conjunction with a performance of C.P.E. Bach’s Magnificat, the whole thing would become perfectly clear.

The bear moves very slowly along the bank, occasionally shifting umbrella and watering can to opposite paws. The music soars between molecules of rain as they sift down grey and blue over the river, with the sun making irregular entrances through various gaps overhead, so that the place under the tree where the bear stands is patchily illuminated by remnants of flung light. Everything here is porous.

Except (probably) the bear, who, being a silhouette, embodies a different kind of substance. Thus we need the music, to knit and sort realities. But, mostly, to precipitate love—a love that reds the air without in the least showing itself in the landscape. And has crept into the fifth dimension. And lies there enfolded, invisible but fully present, able to turn freely inside space as if angled to catch its own constant disappearing.

Born under the sign of Libra, Anita Sullivan cheerfully admits to a life governed by issues of balance and harmony. This likely led to her 25-year career as a piano tuner, as well as her love of birds (Libra is an air sign), and love of gardening, music, and fine literature (beauty). She spent years trying to decide if she was a piano tuner who wrote poetry, or a poet who tuned pianos. She traveled a lot without giving way to a strong urge to become a nomad; taught without becoming a teacher; danced without becoming a dancer; and fell totally in love with the high desert country of the Southwest, and then never managed to stay there. However, Sullivan did firmly settle the writing question—yes, it turns out she is a writer, but not fixed upon any one category. She has published four essay collections, a novel, two chapbooks and one full-length book of poetry, and many short pieces in journals. Most recently, her essay collection The Rhythm Of It: Poetry’s Hidden Dance, indulges her instinct to regard contemporary free-verse poetry as being built upon natural proportional rhythm patterns exhibited in music and geography, and therefore quite ancient and disciplined—not particularly “free” at all. This book is a finalist for the Montaigne Medal from the Eric Hoffer Book Award. More about her books can be found on her website: www.anitasullivan.org. The poet-piano-tuner-etc. also maintains an occasional blog, “The Poet’s Petard,” which may be accessed here here.
View all posts by Anita Sullivan →
This entry was posted in Uncategorized. Bookmark the permalink. Follow any comments here with the RSS feed for this post. Post a comment or leave a trackback: Trackback URL.