Listening to Doc Watson for the Last Time

“During the intermission, I took advantage of an opportunity to talk with Doc after the ones wanting to say hello and take snapshots had cleared out. We chatted briefly about our ancestry in common, the Greene family, and then, turning serious, Doc said, “I’m really concerned how people have lost respect for what other people think and say. Everybody seems to think they’re right and the other fellow is wrong. Just no tolerance. No respect. It makes for a lot of ugly talk. I wish we could all learn to be more tolerant. It’d be a better world if we could.” John Idol 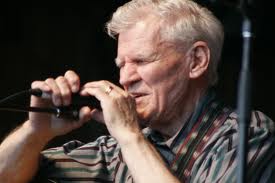 BURLINGTON North Carolina (Weekly Hubris)—9/10/2012—On August 27th of 2011, I last heard Doc Watson sing and play. The setting: a small barn on a cattle farm owned by Sterling Carroll a few miles west of downtown Mountain City, Tennessee. The sky was overcast and cool breezes swept through the barn, the doors of which were open. Awaiting his turn to go on the makeshift stage, Doc sat in a breezeway, finally growing so chilly that he beckoned someone to fetch him a jacket. He then sat quietly and waited for the Krueger brothers to finish their warm-up act.

Like Doc, Sterling grew up in Deep Gap, North Carolina, and had become a supportive admirer of Doc’s music and an exemplar of one of Doc’s favorite causes, sustainable development in the Blue Ridge Mountains. For several years running, Sterling had invited fans of Doc to benefit performances in the barn. Money gathered went to add to a fund established by Doc and his wife, Rosa Lee, at Appalachian State University, “The Doc and Rosa Lee Scholarship.”

Happily, my wife and I received invitations over the years and joined with kinfolk, neighbors, and strangers to hear Doc perform. Before a roughly constructed stage of perhaps 8 by 12 feet, four or five rows of chairs stretched about the full length of the 40-foot barn, filled by attentive listeners. I usually claimed a seat directly in front of Doc, at most 10 feet from him. I tried not to miss a note or the pluck of a string. So rapt was my attention that Sterling once remarked, “I never saw anybody so intent on not missing a thing.”

Most spellbinding of these songs was the first, since it had not only a catchy tune but a raft of things to visualize and try to remember. Doc’s masterful rendition of the song created a vivid picture of “log,” “branch,” “frog,” “fleck,” and “speck” in an underwater scene that showed his talent early on for bringing life and drama to his songs. Though I later tried to piece the song together, I never got the order of items on that log right.

Among those attentively fixed on Doc’s playing and singing was my classmate Rosa Lee Carlton, his wife to be. She and I had been together from the first grade. When she didn’t show up for classes in Boone, a neighbor of hers asked, “Don’t you know that Rosa Lee married Doc this summer?” Nerdy me thought, why would anyone marry a person a good ten years older? But what did a 13-year-old nerd know about love? Doc and Rosa Lee proved that they knew its deepest meanings.

On that unexpectedly cool August night, Doc joined in the warm rounds of applause following the last number of the Kruger Brothers (http://www.youtube.com/watch?v=wIomLzwaygQ). These German-Swiss performers, long-time admirers of Doc’s music, removed their gear from the stage but left behind their trio’s bassist, Joel Landsberg, who remained to provide back-up for Doc and Charles Welch, an amateur musician from Deep Gap, a man who repeatedly said how honored he was to share the stage with Doc.

The audience watched as Doc’s gear was set up. By now, he had shed the jacket and sat beneath the warming glow of several portable stage lights, his thinning but still curly hair brushed tightly against his scalp. He’d lost weight since we’d seen him the year before, and some furrows on his forehead had grown deeper, not surprising, since Rosa Lee was going through some rough times and his grandson, reputedly now into drugs rather than music, had ceased to play with him. Still, Doc didn’t look his 88 years, there being a lingering youthful look about him as he tuned his guitar.

Dressed casually in a short-sleeved shirt, brown-and-tan squares, and light brown pants, he ran his fingers swiftly over the strings and began singing in a steady, unwavering voice.

As in every performance I’ve heard since my childhood, this one, too, was unrehearsed, Doc moving among old ballads, Country & Western tunes, blues, novelty pieces, and “Summertime,” from Porgy and Bess . Few singers are his equal in giving life to this Gershwin masterpiece. His picking seemed as flawless as ever, so rapid and sure in the swift passages; so poignant and heart-moving in the tender moments. His age betrayed him in only one song, “The Tennessee Stud,” which he did in response to a request from the audience. He said, “I haven’t done this in many years, so I may not remember it all.” Indeed, he forgot some of the concluding lyrics but pressed on.

Chuckling softly as his fingers moved away from the strings, he said to the audience and Charles Welch, “I bet you haven’t heard those words before. I just made them up!” Then he chuckled again. They put the rambling old stud out to pasture suitably and Doc began wondering aloud what song to do next. 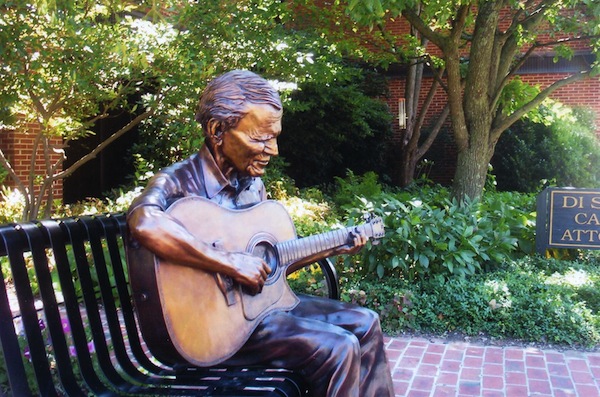 Here, Charles Welch broke in to ask, “Has anyone seen the statue of Doc in downtown Boone? He’s seated on a bench with a guitar on his lap.”

Doc had something to add: “I got to hold the head of that statue in my hands before they fixed it to the body. I rubbed its nose and said ‘I think it looks a lot like me.’” Here he smiled broadly, and the audience laughed.

Indeed, the statue looked a lot like him when, next morning, Margie, my wife, and I drove up from our camper in Deep Gap to see it in the middle of town, at the intersection of King and Depot streets. Before he had become a world-famous singer, Doc had played for coins and an occasional greenback on that corner and the one opposite it.

Once again, Charles Welch broke in: “Doc, let me tell a little story about how some men from the meanest part of Watauga County kept The Law from chasing you from that corner.” Doc nodded approval.

“Well, one of the town’s police officers, obeying an order from the Chief, come to where Doc was a-singin’ and said, ‘I got to ask you to stop, Doc, and move on,’” Charles Welch began.

“’No, way,’ said some of them mean-looking fellers. ‘Doc ain’t a-movin.’ They stepped up to the officer and told him to scat: ‘You go; Doc stays.’” In a menacing way they moved towards the policeman. Well, he took off a-runnin’ and never come back to bother Doc. Now Doc is in Boone to stay.

“Go see for yourself. That statue is Doc to a T.”

With the playing and singing of “Shady Grove” or the Carter Family classic, “Bury Me Beneath the Weeping Wilow,” Doc and Charles ended the first set. Since I have no program to turn to and must depend on a failing memory, these may not have been the set-ending songs. It matters only that Doc, at some time during the evening, shared these with us.

During the intermission, I took advantage of an opportunity to talk with Doc after the ones wanting to say hello and take snapshots had cleared out. We chatted briefly about our ancestry in common, the Greene family, and then, turning serious, Doc said, “I’m really concerned how people have lost respect for what other people think and say. Everybody seems to think they’re right and the other fellow is wrong. Just no tolerance. No respect. It makes for a lot of ugly talk. I wish we could all learn to be more tolerant. It’d be a better world if we could.”

As firmly as I could, I said, “You’re right, Doc, absolutely right.”

Charles Welch then took his arm and led him back to the stage. Their second set took me on a sentimental journey: “On the Banks of the Ohio,” which I’d loved since shedding my diapers: “Summertime,” for its tenderness and vivid picture of The Other (African-American life); and “I Got Them Blue Ridge Mountain Blues.” Blues, for those mountains, as I sat in Hillsborough and Burlington, out of the sight of them, had been a prime mover in two books written in my retirement: Blue Ridge Heritage and Deep Gap Days. At least I could see them while I lived in Clemson, South Carolina but, in Piedmont, North Carolina, I found myself verbally recreating them.

As I listened to the third of these songs, I was recreating many of the occasions when I’d heard Doc sing and play: at Deep Gap Elementary when he was only 18 or 19; in Atlanta, Georgia, at a packed theater; at Merle Fest with other nationally acclaimed performers; in Cove Creek, North Carolina, the location of the Doc Watson Museum; and at an SRO benefit performance at Appalachian State University.

On these other nights, as I recalled them, his baritone had been richer, his yodeling of a Jimmy Rogers piece not short of breath, and his body and limbs less lank. But his fingers, even in his 88th year, moved with wondrous dexterity, with perfect surety, as he showed what a masterful flat-picker he was.

My joyful reveries clashed with the thought that I might be hearing Doc perform for the final time.

Indeed, it was the last time I would hear him, though he had a few other gigs before his death on May 29th of this year, just several days short of a celebration to honor him at the North Carolina Museum of Art.

It was with the hope that his traditions of music would survive that my wife and I, and a few other lovers of his gifts, established the Arthel (Doc) Watson Scholarship in Traditional Mountain Music at Appalachian State University. We wanted to honor him and provide means for younger musicians to follow him.

With the passing of Doc, there’s a big, big hole in our lives. But not just our lives, for Doc had admirers in places far beyond Deep Gap and the Blue Ridge Mountains. Still, the many recordings he made will never plug the hole.

Readers wishing to contribute to the Doc Watson scholarship established by the Idols at Appalachian State University, go to: http://www.news.appstate.edu/2008/05/20/hillsborough-residents-establish-scholarship-in-honor-of-doc-watson/.