“The children keep asking where/the other children are. Their mothers won’t say/phony life-vests pulled them toward the bottom/while breakers drove them into jagged cliffs./Tourists on their morning walk won’t see/the skins of boats along the fog-bound shores,/the flotsam of bodies torn and torn again./Terror this intense—it must be veiled.”—Don Schofield 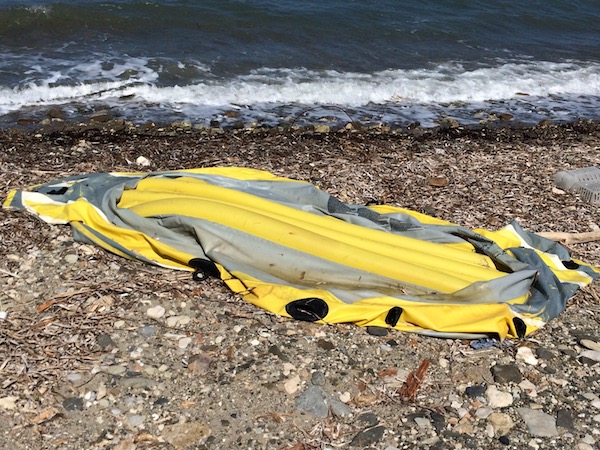 THESSALONIKI Greece—(Weekly Hubris)—January 2019—It’s been a little over three years since I traveled to the Greek island of Kos to join other volunteers in assisting refugees making the treacherous night-journey from Turkey in overcrowded dinghies. By now, the “refugee crisis,” as the powers that be have dubbed it, has receded from the headlines, even though thousands are still living in squalid, fenced-in camps in Greece, and tens of thousands more in other camps throughout Europe. And the destitute and desperate keep arriving. 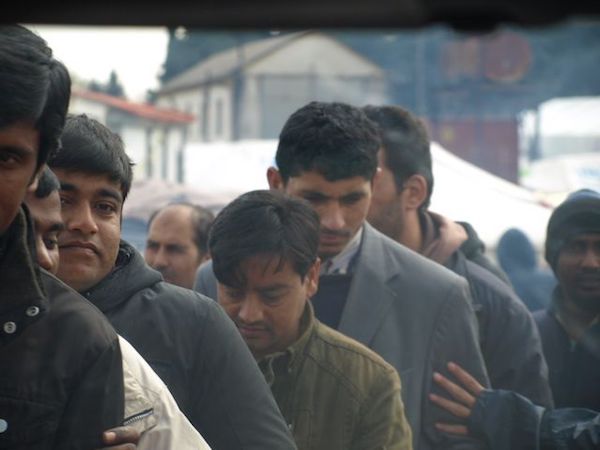 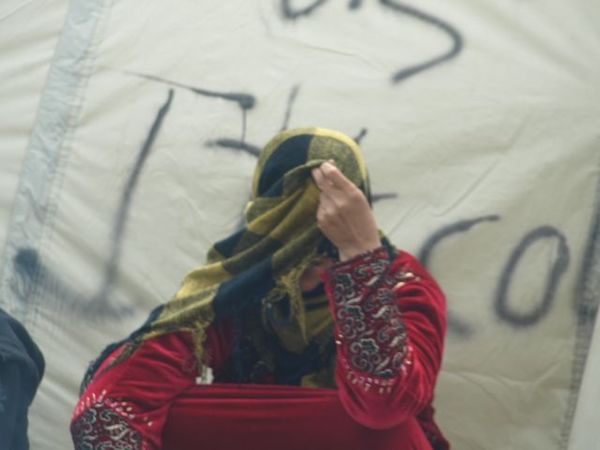 Back then, in the fall of 2015, more than a thousand supplicants per day—men, women and children—were seeking relief on Kos. The ones we helped were the lucky ones who reached the island alive; many others didn’t. Though my time as a volunteer was brief, a little over a week, working all night at a relief station on the quay of the main harbor, vivid memories from that experience remain seared into my head and heart.

Water, dry clothes, a candy bar, a blanket—
that’s what we give each one when they arrive.

We put the men in tents along the quay,
families in rooms nearby. All night

they hear the calls of owls and nightingales,
wake to vaguely crafted dreams of havens

farther north. The children keep asking where
the other children are. Their mothers won’t say

phony life-vests pulled them toward the bottom
while breakers drove them into jagged cliffs.

Tourists on their morning walk won’t see
the skins of boats along the fog-bound shores,

the flotsam of bodies torn and torn again.
Terror this intense—it must be veiled. 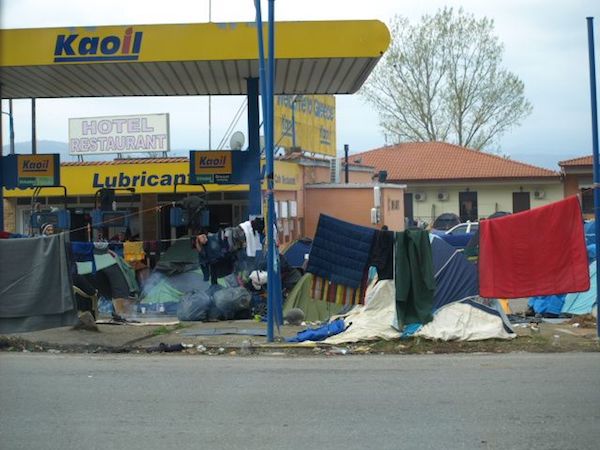 Roadside gas station turned over to refugees walking Hwy A1 toward Idomeni.

If there was anything gratifying about experiencing firsthand the plight of refugees, it was observing just how many Greeks opened their arms to those fleeing economic hardship, war and political tyranny.  Hospitality to strangers is still a deep-set tradition in this culture.  In ancient times, the gods would appear before humans as sojourners in need, as Homer tells us, and woe to those who didn’t offer shelter and food for a night. Today, virtually every Greek has a relative, close or distant, who was forced to flee their homeland because of political persecution or, in desperation, chose to emigrate to Germany, the US, Australia, or Latin America to find a better life.

And, too, there are the thousands of Greeks who fled Asia Minor in the early twentieth century and wound up destitute on the shores of such islands as Kos. As the taxi driver who picked me up at the airport explained, “The police here will take away my cabbie’s license if they catch me giving a ride to a refugee. It’s strictly forbidden. But my wife’s grandparents were driven from Smyrna in the Catastrophe of 1922.  She makes it clear that I better help them.” 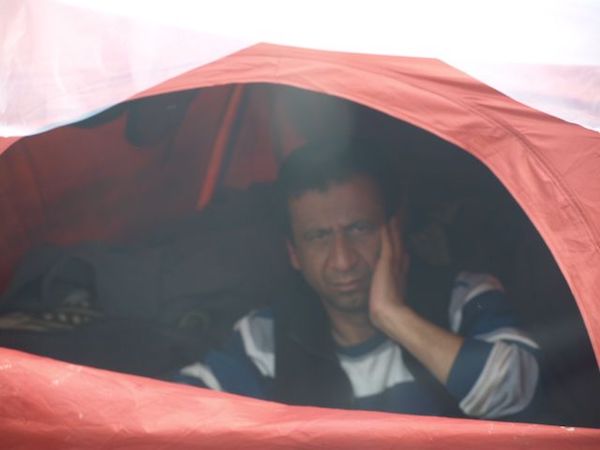 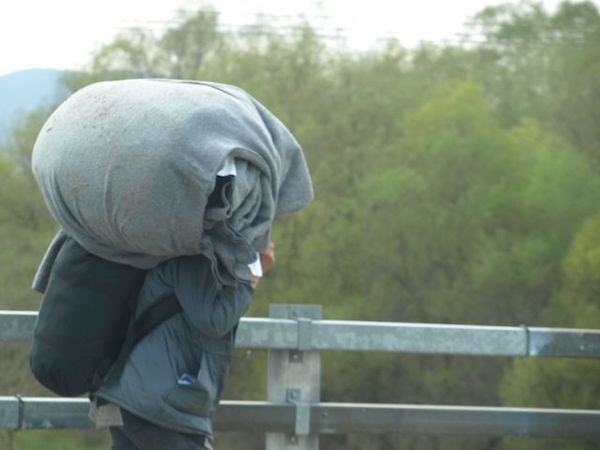 Refugee walking Hwy A1 toward Idomeni.

The following poem focuses on one Captain Niko, the landlord I had while spending time on a small Cycladic island a few summers ago. For years he plied the seas to South America and back, and, once retired, plied the renters of his rooms with tsipourowhile entertaining them with stories of his travels. But things changed once the debris of the drowned started washing ashore near the Captain’s tourist bungalows.

Our landlord Captain Niko tells us how
his ancestors landed on this island
two centuries ago.

Each migrant chose
a stone and threw it deep into the fog.
Where it landed each one built a house.

The Greeks in Uruguay, he says, once exchanged
shoes they made from the skin of unborn calves
for feta cheese and olives—Greek essentials—

and told him of a kinsman there who wanted
to return back home. A bride was waiting.
But bandits stole his money; shamed, he fled

to the interior. This morning the Captain
is carrying a broken oar up from the sea,
torn life-vests. Looking at us. No stories now.

In spring of 2016, in a van filled with canned goods and medical supplies, I went with two friends to Idomeni, a mud-soaked tent-city that had sprung up when one of Greece’s northern neighbors sealed-off its border. At the time we visited, the camp had grown to over ten thousand refugees. All had come on foot from the port of Piraeus—the equivalent of walking I-90 from Boston to New York City—intent on making their way to Germany or Scandinavia. A few weeks later, police emptied the tent-city, forcing its residents to move to mainland camps far away from the border, some on tour busses emblazoned with the name CrazyHolidays.

The day we were there, the refugees held a protest. Something they did fairly often, a British reporter told us.  As much to pass the time, I imagined, as to express their pain and frustration at their dreams being aborted by the powers that be. The poem below is in the voice of those stuck in Idomeni, addressing the powers that be . . . . 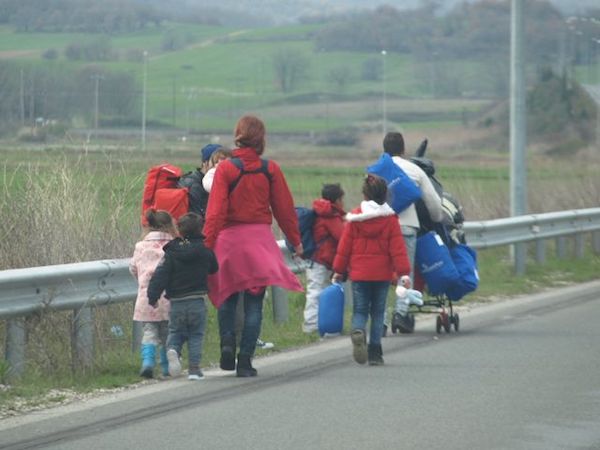 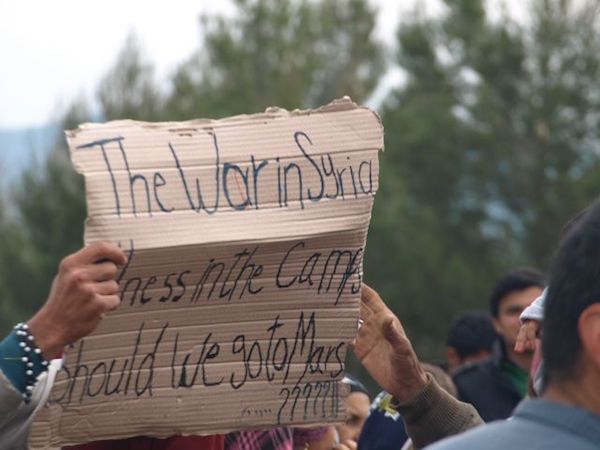 Should We Go to Mars??

Whole families pushing wobbly shopping carts
against the wind and rain, balancing bundled hopes
on heads already heavy with history, we’ve come
to this muddy field of stubble at the border,
the border closed.

We hang our clothes along the chain-link fences
you’ve built, stand in line to shower, to eat,
in line again to charge our phones and calm
each other down, no news from home.

You too would flee the bombs, book passage on
a leaking dinghy, find room for your pliant body
among two-hundred others. Soon, water gone,
motor dead, boat sinking, life-jackets worthless,
you’d see how men, women and children can hold on.

We plod this camp’s one dirt road,
part like the Dead Sea when your trucks filled with charity
arrive, your cars with politicians and photographers
eager for pictures: our wives in black hijabs
hiding their faces, our daughters pushing empty strollers,
our husbands sitting in mud, telling stories and arguing
about where to cross the frenzied border river,
how many times our neighborhoods have been bombed to rubble,
if we’ll always be this powerless.

Our children follow beside you, pressing thin foreheads
against your rolled-up windows, not begging, just foraging.
They raise one finger as they look inside. “One,”
they plead, “One,” meaning one of whatever
you might have, one Chiclet or candy bar perhaps,
that beeping phone on the dash, the camera in your lap,
or maybe that empty seat beside you, one ticket
to another life.

One day your children’s children will marry ours.
By then, the planet stropped by storms, whole cities
and forests toppled and burning, dead bodies disgorged
into the sea, we’ll all be telling the same story:

how all of us, together, with our crates of lemons,
our bundles of yellowed books describing how to navigate
the stars, weighted down even more by history,
wobbled off to Mars. 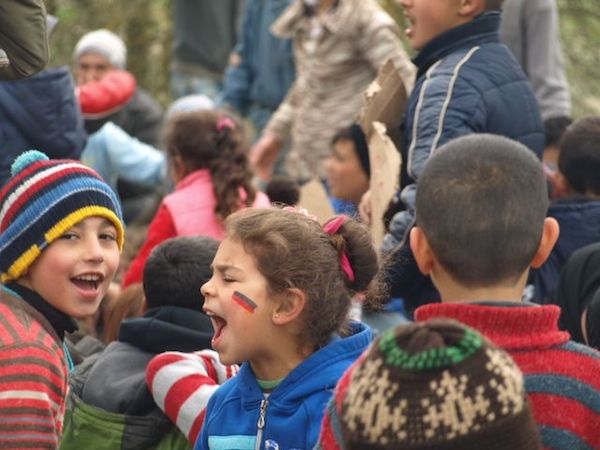 My hope is that, if poems like the above can serve no other purpose, they can at least keep the plight of supplicants alive in the minds of those the gods still visit. 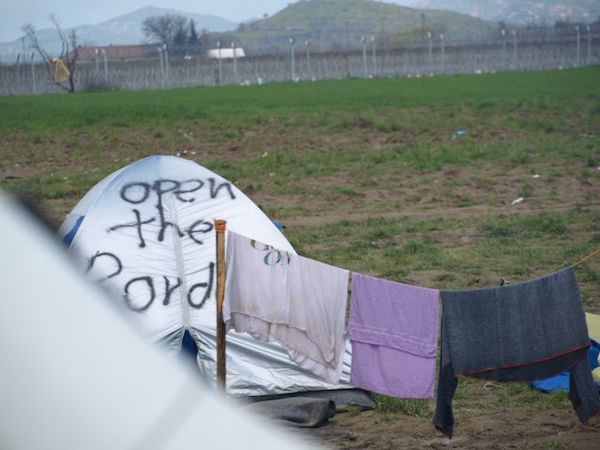 Author’s Note: “Migrant Stories” first appeared in Ergon; “Relief” in Measure. Both poems have been collected in The Flow of Wonder (Kelsay, 2018).  A more recent poem, “Should We Go to Mars??” appears here for the first time. All photos by the author. 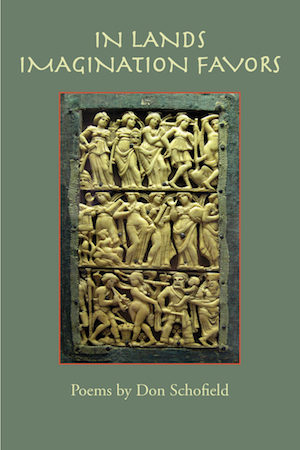 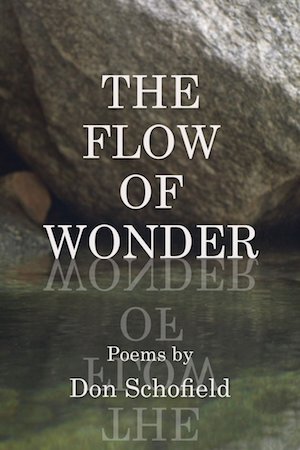 Born in Nevada and brought up in California, Don Schofield left America in 1980. Since that time, he has been living and writing in Greece, traveling extensively, teaching, and serving as an administrator at various universities—Greek, American, and British. Fluent in Greek, a citizen of both his homeland and his adopted country (or, more precisely, the country that adopted him), he has published several poetry collections as well as an anthology of American poets in Greece and translations of contemporary Greek poets. He has been awarded the Allen Ginsberg Award (US), the John D. Criticos Prize (UK), and a Stanley J. Seeger Writer-in-Residence fellowship at Princeton University. His first book, Approximately Paradise, was a finalist for the Walt Whitman Award, and his translations have been nominated for a Pushcart Prize and the Greek National Translation Award. Recently retired, he and his companion live in both Athens and Thessaloniki.
View all posts by Don Schofield →
This entry was posted in Uncategorized. Bookmark the permalink. Follow any comments here with the RSS feed for this post. Both comments and trackbacks are currently closed.