“Like my grandfather’s dairy cows, sheep are the shepherd’s livelihood. But they are also extended family. Sheep belong to the shepherd and there is intimacy created by that kind of ownership. Many of us have dogs and cats: they belong to us and, when we are sad, or scared, or excited, they know it. My dogs know my voice, but they also know my heart. There is a unique intimacy involved in this kind of ownership. They may belong to me. I rescued them. And yet, sometimes, it is so clear that I am the one who has been rescued.”—Robin White 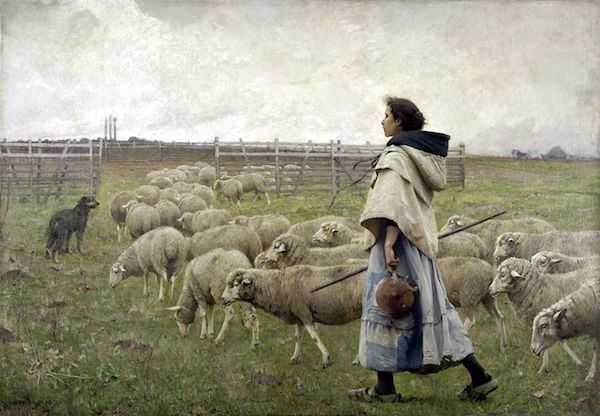 LAKE HARTWELL South Carolina—(Weekly Hubris)—December 2018—How many times have you heard the words of Psalm 23? It was probably included in almost every funeral service you have ever attended. It comes up in the Revised Common Lectionary, that guide book to the Protestant year, at least every three years, and it may come up every year, in one way or another, so that many, many of us in the West frequently hear it read as part of worship.

Fortunately, despite its recurrent use, Psalm 23 does not wear out.

The Lord is my shepherd;
I shall not [a]want.
2
He makes me to lie down in [b]green pastures;
He leads me beside the [c]still waters.
3
He restores my soul;
He leads me in the paths of righteousness
For His name’s sake.
4
Yea, though I walk through the valley of the shadow of death,
I will fear no evil;
For You are with me;
Your rod and Your staff, they comfort me.
5
You prepare a table before me in the presence of my enemies;
You anoint my head with oil;
My cup runs over.
6
Surely goodness and mercy shall follow me
All the days of my life;
And I will [d]dwell in the house of the Lord
[e]Forever.

I agree with Bible scholar Walter Brueggemann, who says of Psalm 23, “It is almost pretentious to comment on this psalm. The grip it has on biblical spirituality is deep and genuine. It is such a simple statement, that it can bear its own witness without comment.” Then, Brueggemann follows that disclaimer with more than a few pages of further comment.

I am no Walter Bruggemann, but allow me, good friends, also to comment.

Two of my earliest childhood memories take place on my grandparents’ dairy farm, in upstate New York, where I spent nearly every weekend of my childhood. I remember my grandfather calling the cows in at milking time: “Cabossy! Cabossy!” I knew, perhaps instinctively, or perhaps because of the warmth and tenderness I heard in my grandfather’s voice, that those cows were family. When he called, they knew his voice and came lumbering through the green pasture to the barn.

My other memory is of my grandmother holding me on her lap; reciting one of her favorite poems. I can still feel the comfort and warmth of her arms wrapped around me; still smell the fresh baked apple pie on her apron.

I can also still hear her voice in my ear, teaching my heart the words she loved and believed: “The Lord is my shepherd, I shall not want.”

These familiar words foster comfort, at least in those of us who learned them early. In times of need or uncertainty, the “familiar” is very reassuring. The content, the message of the psalm itself is comforting. The image of God as shepherd providing for us and protecting us, God’s sheep, assures us of God’s presence with us always; whether in green pastures, in the valley of the shadow of death, at the table prepared for enemies, or in God’s house, forever. So, the message is comforting; and our long familiarity with the psalm makes it comforting—the nature of the psalm is comforting because it is one of familiarity.

It is not long before the description of shepherd turns to a dialogue with God: “thou art with me.”  The psalmist makes the relationship even more immediate, writing, “You are with me.” The psalmist knows God, speaks to God, believes in what God is and what God does. There is comfort (for writer and reader) in the intimacy and familiarity revealed in the relationship.

Like my grandfather’s dairy cows, sheep are the shepherd’s livelihood. But they are also extended family. Sheep belong to the shepherd and there is intimacy created by that kind of ownership. Many of us have dogs and cats: they belong to us and, when we are sad, or scared, or excited, they know it. My dogs know my voice, but they also know my heart. There is a unique intimacy involved in this kind of ownership. They may belong to me. I rescued them. And yet, sometimes, it is so clear that I am the one who has been rescued.

Jesus says, “I am the good shepherd, I know my own and my own know me.” This kind of knowledge is not intellectual information but, rather, relational. This kind of ownership is not about mere possession: it is about a relationship. It is about being so connected to something that it becomes part of us. It is about being so attached to something that we defend it as though we were defending our own selves.

It seems as though “I shall not want” isn’t so much a certainty but, perhaps, instead, an intention; something we should strive for. “I shall not want” is a challenge to trust, to know that because we are owned by the shepherd, because of that relationship, we have no need to want. We have enough.

Professor of preaching Tom Long says that “when we are working with a psalm, we are dealing with language and form which may appear to be simple and compact, but which in fact aims at creating a shift in the basic moral perception of the reader. Psalms operate at the level of the imagination, often swiveling the universe on the hinges of a single image.”

The image of satisfied sheep begins to tilt and even topple our world when we take ownership of the words “I shall not want.” I can’t remember where I read it but, somewhere, I read that psalm 23 is a kind of protest psalm. The four words, “I shall not want,” become radical and life-altering because those words express, embody, trust. The trust that we already have enough becomes an act of resistance in a culture of consumerism; a culture that works so hard to convince us that we need more.

We want more stuff. We want more convenience. I want another pair of shoes, and a bigger closet to hold all my shoes. When I travel, I want a case of bottled water. I drink a lot of water and, when I’m away from home, bottled water is just so convenient.

As sheep, we are not content simply to graze in the green meadows, we abuse and misuse the gifts we are given. Our waters are contaminated with waste. We have befouled our rivers. Our atmosphere is laced with toxins. We have perverted the earth, ransacked mountains, butchered rain forests, leveled hardwoods, annihilated species, all because we want . . . we want . . . we want more.

Last week, I woke up, hours before dawn, mulling over the memory of a walk in the woods I had with my father many years ago. While growing up, one of the things I really wanted was time with my father. I thirsted for a deep connection with him. I longed for him to show up at the concert where I was singing a solo. I knew he was tired when he came home from work, but I wanted him to acknowledge and engage me at the dinner table. I wanted him to come watch me play basketball, even though I wasn’t as good at it as my brother. I yearned for my father to know me.

I knew he loved me, but I wanted to be known.

On that day, as we walked quietly through the woods, I felt such a deep bond with him. We were doing something we both loved; we both needed—involving solitude, Nature, warm sunshine, a gentle breeze, dirt beneath our boots. As we walked, I noticed Dad seemed to be scanning the woods, searching for something. He didn’t say a word, but I knew he was on some sort of mission. All at once he stopped, knelt down in the knee-high ferns and began to pull ground cover away from something.

I stood silently watching as he slid a flat rock to the side, reaching down into an opening in the ground to pull out an old, beat-up tin cup. He dipped it into the hole, then pulled it out overflowing with fresh spring water. As he looked up at me, with sunlight filtering through the trees streaking his face, he offered me the cup. The water was cold, clean and crisp. I had never tasted such purity. It filled my soul and, as I looked into my father’s hazel eyes, I felt known. I was his: cared for, loved, intrinsically linked to him. And I was comforted.

But it was more than even that: In that moment, there was nothing more I wanted.

In our relationship with God, there is indeed comfort, but there is also the challenge to believe so deeply that we are loved, cared for, bound to God that we want nothing more.

Psalm 23 is about the knowledge of a relationship so powerful that there is only satisfaction, having enough, abundance. This is where the psalm shifts our basic moral perception from a culture of scarcity, where we are never enough and we are always afraid we won’t have enough, to the psalmist’s opening words . . . which remind us that we already have it all.

5 Responses to Canticle of Comfort & Challenge