“Should Colony Collapse Disorder worsen, and we lose the bees, an engineering lab at Harvard is perfecting tiny drones, neither male nor female, that will pollinate our crops. Lamentably, the drones will gather no pollen, nor produce any beeswax or honey. Or in Aesop’s words, no ‘sweetness or light.’”—Skip Eisiminger 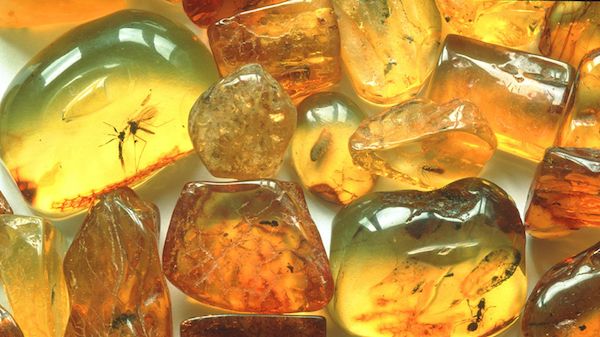 Preserved in tree sap, not honey.

I. “Bees that make the honey do not loiter in the hive.”—19th-Century maxim

CLEMSON South Carolina—(Weekly Hubris)—June 2019—As a wise-cracking boy in a German natural-history museum, I recall seeing a honey bee suspended in amber and wondering aloud if the careless fellow had fallen into Winnie the Pooh’s honeypot. The museum guide, who was not the least amused, assured me and my classmates that what we were looking at was fossilized tree sap, not honey. Moreover, bees are sure-footed around their precious hexagonal larders, and the “fellow” was a female.

Though humans have been tending to beehives ever since they began settling down during the Agricultural Revolution (c. 8,000 BC), it wasn’t until 1675 that Jan Swammerdam of the Netherlands noticed the “king” laying eggs. Of course, Swammerdam’s many skeptics needed only to look back a few years to the prosperous reign of a human “queen bee” by the name of Elizabeth I. While the Virgin Queen commanded an army and navy, her six-legged equivalent was laying as many as 2,000 eggs a day, her future air force.

If bees aren’t charismatic megafauna seizing the lion’s share of the media’s attention, they certainly are charismatic microfauna.

With brains the size of a sesame seed, they can count to four and communicate the location of a food source with the waggle of their fuzzy butts. Though a single bee produces one-twelfth of a teaspoon of honey in a lifetime, theoretically, she could fly around the globe in 50 days on a tablespoon of that fuel. Though a bee cannot transport nearly that much weight at one time, it can carry half its weight in pollen and nectar in its “pollen baskets” and “honey stomach,” respectively. With its four wings beating 200 times a second, a bee may fly as far as six miles from the hive in search of food. But it takes the individual efforts of the colony (anywhere from 10,000 to 80,000 bees, depending on the season) to fly 55,000 miles to visit some two million blossoms to produce a single pound of honey. While pollen is the bee’s only source of protein, nectar is its energy source. And while many insects sleep through the winter, bees huddle around their queen, moving from the colder fringes of the hive to the warmer core, all the while keeping the interior at a toasty 95°F. 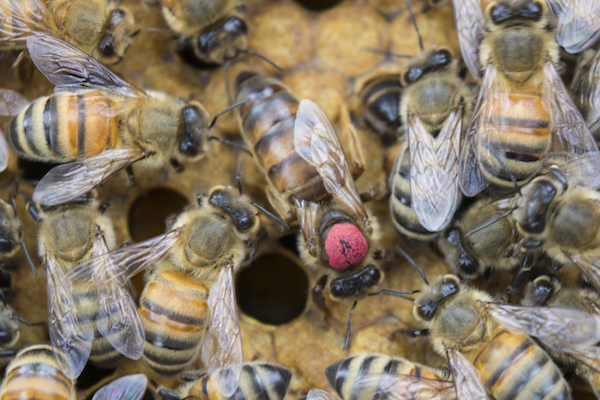 Sworn to protect the queen.

II. “Bees with honey in the belly have a barbed stinger in the tail.” —19th-Century maxim

In Testament to Beauty (1929), the English poet Robert Bridges relates a “pleasant fable.” “Once upon a time, he claims with tongue in cheek, “bees were fully endowed with Reason.” They lost it, however, in the perfection of their orderly existence where “[Reason] pined away and perish’d of disuse.” As a survivor of the mechanized horrors of World War I, Bridges wanted no part of any packaged order devoid of freedom and intelligence, but many have been drawn to the concept of the utopian hive where the loudest noise is the “murmuring of innumerable bees.” (Tennyson)

The latest apian communard I’m aware of is April Aldrich, who, in A History of Honey in Georgia and the Carolinas (2015), writes, “The bee is a symbol of nature that man should follow, an earthly systematic community that thrives for the benefit of all, lives off the land, and with love and harmony produces a never-expiring material [honey] that heals, nourishes, and protects.”

But the reality of the hive is quite different than what Aldrich implies. The solitary queen lives three to seven years and does perhaps 10 percent of the work—she lays all the eggs the hive will ever hatch and dispatch. She also secretes powerful pheromones that establish the “wisdom of the hive,” namely, a blueprint for the queen’s survival. Incidentally, smoking a hive blocks these pheromones, leaving the hive in a state of suspended but confused animation.

The queen’s sterile daughters, who number in the thousands and live about a month, complete the remaining 90 percent of the hive’s chores. A handful of virile males, whose total number is about 200, mate with the queen and die in short order, while their drone brothers die celibate in two to three months, often murdered by their sisters—one percent of whom are programmed to be undertakers. Not exactly utopia is it?

For millennia, the bee has symbolized sociability, industry, and productivity, exactly the qualities admired in the proletariat by Marx, Lenin, and Mao. 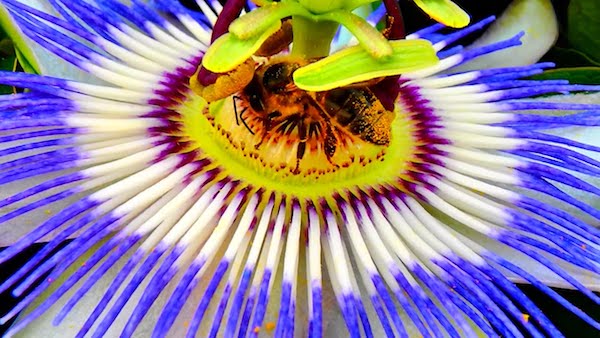 While Mohammed admitted bees to heaven, and Pliny the Elder deemed honey “star sweat,” Christian apologists pictured apis mellifera bearing honey and medicinal pollen leaving Eden with the serpent and the other sinners. Despite the free lunch served by “nature’s confectioners,” many monks raised them solely for their votive-candle wax. Having sworn off earthly pleasure, the monks wanted no part of what one lonesome New England poet called her debauchees of dew.

IV. “Sunlight’s a free lunch without a sales tax,/and the beehive yields honey and beeswax.” —The Wordspinner

To illustrate just how pervasive the drone of bees is in the English language, I recorded the following conversation between two friends: a retired Professor of English, Dr. Buzz Drone, and his wife, Queenie, a domestic goddess, who asked:

“What are you working on this time, Buzz?”

“I’ve noticed the bees in your bonnet have been swarming recently. You’re not sucking the psychotropic honey again, are you?”

“No, I’m just busy as a bee making a B-sharp beeline/for my bee-blog deadline.”

“Is this another tale of bee-stung lips stung by disappointment?”

“None of your beeswax, my befuddled Queen—now pretend you’re a bee and buzz.”

[In the distance, one can hear Queenie mutter:] “I think I need a smoker.” 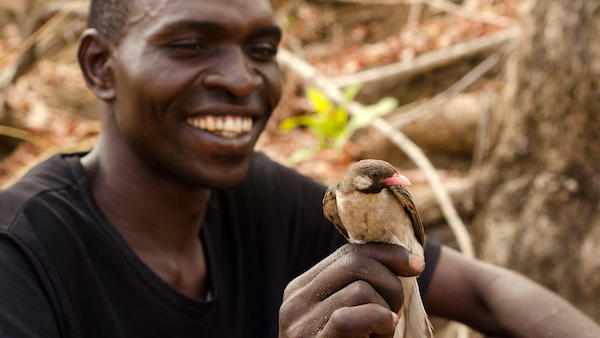 For thousands of years, the African honey guide has led Mozambicans to honey trees in a charming example of symbiosis. A continent away before Europeans arrived in North America, there were no feathered guides to the honey trees because there were no honey bees. The appearance of “the white-man’s fly,” as Native-Americans called the imported bee, meant one thing—encroaching European settlers and their infernal pets.

Except for honeysuckle blossoms, some seasonal black- and blueberries, maple sap, and sweet corn, Native-Americans had little experience with sweets. Thus, they did not understand the white-man’s honey hunger, and it would take a generation or more for them to appreciate the uses of beeswax. Here’s a short list:

Today, bees are responsible for pollinating the plants that go into one in every three mouthfuls that Americans consume. McDonald’s “Special Sauce” alone contains five bee-dependent ingredients because of the world’s 94 major crops, 80 percent are pollinated by insects, 92 percent of which are bees. Should a beekeeper ever doubt the profitability of bees, he or she should know that Burt’s Bees was sold to the Clorox Corporation in 2007 for $925 million. In all, bees contribute $15 billion annually to the US economy. Should Colony Collapse Disorder worsen, and we lose the bees, an engineering lab at Harvard is perfecting tiny drones, neither male nor female, that will pollinate our crops. Lamentably, the drones will gather no pollen, nor produce any beeswax or honey. Or in Aesop’s words, no “sweetness or light.”