“2019 was a banner year for the IPCC as it concluded climate change is abrupt and irreversible. After the occasional report by the corporate media during the standard, 15-second news cycle, this critically important information was relegated to the dustbin. Apparently, ‘news’ about sports and celebrities is far more important to mainstream media outlets than retention of habitat for life on Earth.”—Dr. Guy McPherson 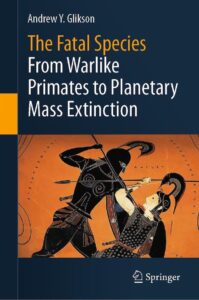 BELLOWS FALLS Vermont—Weekly Hubris)—1 January 2022—From the incredibly conservative Wikipedia entry titled “Climate change” comes this bit of information: “Climate change includes both human-induced global warming and its large-scale impacts on weather patterns. There have been previous periods of climate change, but the current changes are more rapid than any known events in Earth’s history.”

The Wikipedia entry cites the 8 August 2019 report, “Climate Change and Land,” published by the Intergovernmental Panel on Climate Change (IPCC). The IPCC is among the most conservative scientific bodies in the history of Homo sapiens, yet it concluded in 2019 that Earth was in the midst of the most rapid change in planetary history, citing peer-reviewed literature in reaching this conclusion: “These global-level rates of human-driven change far exceed the rates of change driven by geophysical or biosphere forces that have altered the Earth System trajectory in the past (e.g., Summerhayes, 2015; Foster et al., 2017); even abrupt geophysical events do not approach current rates of human-driven change.”

As an aside, 2019 was the year the Oxford Dictionary chose climate emergency as its word of the year.

Doing so did not decelerate the ongoing rapid rate of climate change.

The Wikipedia entry points out the consequences of abrupt climate change currently underway, including desert expansion, heat waves and wildfires becoming more common, melting permafrost, glacial retreat, sea-ice loss, increased storm intensity and other weather extremes, along with the extinction of species. It also points out that the World Health Organization is calling climate change the greatest threat to global health in the 21st century.

Doing so has not slowed the ongoing rapid rate of climate change.

The entry from Wikipedia continues: “Under the 2015 Paris Agreement, nations collectively agreed to keep warming, ‘well under 2.0 degrees C (3.6 degrees F) through mitigation efforts.’” Unfortunately, renowned professor Andrew Glikson pointed out in his October 2020 book, The Event Horizon, that the 2 C mark is behind us. Specifically, Glikson wrote on page 31 of his 2020 book: “During the Anthropocene, greenhouse gas forcing has risen by more than 2.0 W/m2, equivalent to more than >2 [sic] °C above pre-industrial temperatures, which constitutes an abrupt event over a period not much longer than a lifetime.”

Not much longer than a lifetime. Now, that is abrupt climate change.

The IPCC admitted to the irreversibility of climate change in its 24 September 2019 Special Report on the Ocean and Cryosphere in a Changing Climate. Thus, 2019 was a banner year for the IPCC as it concluded climate change is abrupt and irreversible. After the occasional report by the corporate media during the standard, 15-second news cycle, this critically important information was relegated to the dustbin. Apparently, “news” about sports and celebrities is far more important to mainstream media outlets than retention of habitat for life on Earth.

How conservative is the IPCC? Even the conservative and renowned peer-reviewed journal BioScience includes a paper in its March 2019 issue titled, “Statistical Language Backs Conservatism in Climate-Change Assessments.”

The paper by Herrando-Pérez and colleagues includes this information: “We found that the tone of the IPCC’s probabilistic language is remarkably conservative …, and emanates from the IPCC recommendations themselves, complexity of climate research, and exposure to politically motivated debates. Leveraging communication of uncertainty with overwhelming scientific consensus about anthropogenic climate change should be one element of a wider reform, whereby the creation of an IPCC outreach working group could enhance the transmission of climate science to the panel’s audiences.”

Contrary to the conclusion from Herrando-Pérez and colleagues, I cannot imagine the IPCC is interested in transmitting climate science to the panel’s audiences. After all, as Professor Michael Oppenheimer pointed out in 2007, the United States government during the Reagan administration “saw the creation of the IPCC as a way to prevent the activism stimulated by my colleagues and me from controlling the policy agenda.”

It seems that the IPCC was designed to fail. Mission accomplished, US government (with plenty of “help” from others).