Corsica (Without A Hint Of Napoleon)

“Didi found me a small pension in Calenzana, a nearby village notorious for being a center of the Union Corse and the white slave trade. ‘How can you go there on your own,’ friends would exclaim. ‘You’ll be abducted by your straight blonde hair and whisked off to Saudi Arabia!’”—Diana Farr Louis

(L to R) Didi dancing in Calvi; Diana on the beach; and Yoga by the pool.

ATHENS Greece—(Weekly Hubris)—May 1, 2021—A delightful recent read, Harley and the Holy Mountain, in which a philhellene Brit named John Mole describes travelling from his island home in central Evia to Mount Athos on his ancient 50 cc motorbike, inspired me to take a look back at my first vacation with a mobylette or moped. A Moby is even tinnier and tinier than a papaki or little duck, which is how the Greeks refer to a 50 cc bike, but I didn’t feel secure enough to rent something more glamorous like a Vespa.

It was the summer of 1964 and I had been living in Paris since October the year before, with side trips to Madrid for Christmas and the French and Italian rivieras for Easter. But no one stays in Paris for August and so I leapt at the chance to go to Corsica, where my friend Didi, another American who’d come for the Paris experience straight after college, would be working.

Didi didn’t have just any old job. She’d been hired as organizer/hostess by a baron, Henry-Louis de la Grange, who had bought a convent called Alzipratu in the hills above Calvi and used it for glamorous house parties and concerts given by his partner, Thierry de Brunhoff, son of the author of the famous Babar books and a promising pianist. Didi wanted a little company in case things didn’t turn out well, while I intended to devote the month to writing a novel. 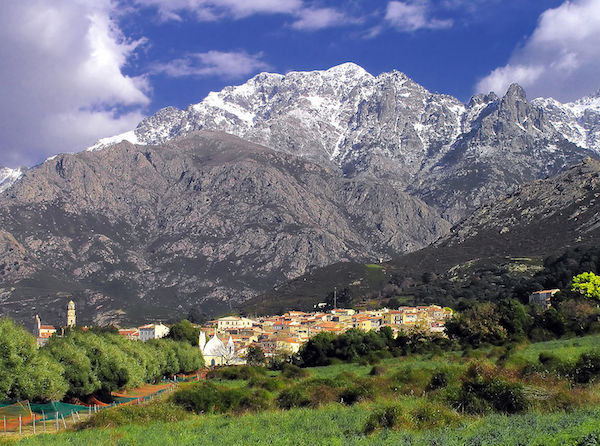 Didi found me a small pension in Calenzana, a nearby village notorious for being a center of the Union Corse and the white slave trade. “How can you go there on your own,” friends would exclaim. “You’ll be abducted by your straight blonde hair and whisked off to Saudi Arabia!”

Unfazed, I set off down the Route Nationale 7 to Marseille, stopping at a few chateaux and picturesque villages that had looked alluring on the previous trip at Easter. Didi met the boat, introduced me to my hotel and then to her employer and the convent. The men were charming, equally at ease in French and English; the convent a combination of stone arches and white stucco surrounded by the obligatory cypress trees with terracotta floors, spare but elegant furniture and a grand piano by the tall windows.

The next day, I rented myself the Mobylette and began a most satisfying routine. Taking Trollope as a model, I spent every morning typing away and only allowed myself to go to the beach or visit the convent after a certain quota of words had filled the page. In the evenings, I wrote some more or attended one of the baron’s soirees. Those parties were in a way very democratic, in terms of dress code at least. The men wore dinner jackets but the women had to wear saris, so that no one could prance around in an Yves St. Laurent original while another, me for example, stuck out in a bargain basement find. And since no guest owned a sari, everyone chose from a pile that would have won raves in a Delhi bazaar. Somehow, I remember no details from those evenings except that the music was exceptional and the menus ran to curries.

Meanwhile, rumors circulated about Calenzana’s ill repute, that murders routinely took place, and that recently a man had been shot in church during mass without a single witness. In all respects, however, the village appeared extremely ordinary, with no sinister undertones, though who was I to suss out what happened behind closed doors? However, I never felt I was being followed or scrutinized for possible abduction into the white slave trade.

Calenzana did have one distinct peculiarity. Its menfolk played boules from dawn to dusk on a dusty patch near a café on the edge of town, no matter what. One afternoon, as I was sitting at the convent, we spotted dark clouds gathering on the other side of the valley above Calenzana. “It must be a forest fire,” said the baron. “Shepherds are always setting the brush alight so that new pasture will grow for their flocks. And they always choose the windiest day, and the fire always gets out of control. It looks as though it’s nearing Calenzana.” 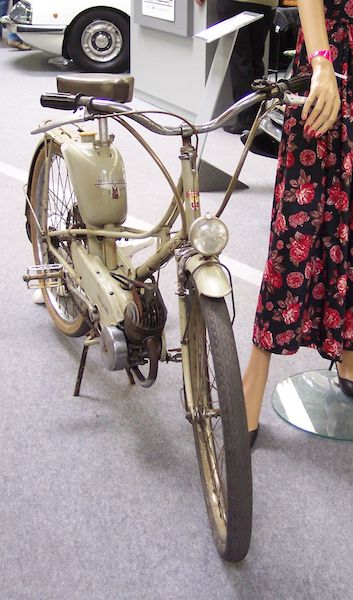 “Omigod, I’d better get back,” said I and rushed to the Mobylette. As I put-putted towards the village, I could see the smoke turning blacker and thicker, and, with churning stomach, thought of my manuscript lying on the hotel bed. But as I approached the outskirts, the usual crowd was still lounging under the trees, eyes glued to the boules players.

Further on, the scene changed to one of frenzied action. Fire trucks spurted streams of water at the blaze, men on foot thrashed at sparks with blankets and wet brooms. Isolated flames were lapping at the roadside opposite my room. Eventually, the combined efforts of all the fire brigades from neighboring hamlets managed to put out the fire, but without any help from the Calenzanans themselves.

“They never lift a finger,” said the baron the next day. “Every year, the same thing happens, the other villages come to the rescue. One wonders why they bother.”

Up in my room, my bed was covered in ashes and incinerated butterflies. The manuscript lay sprinkled with burnt twigs and leaves. After I cleaned up, I read it again. And threw it in the wastebasket with the debris from the fire. Fiction was not my forte. But at least I’d had a month to figure that out. In the morning, I sat down at the typewriter and started an article about a little-known chateau I’d explored on my drive south from Paris. A few days later, I sent it off to the International Herald Tribune. More articles followed, about Corsica. My fingers danced over the typewriter keys; this was so much easier and more fun.

That November, long after I’d given up hope, the IHT published one of my little stories on Corsica and mailed me a check for $15. At last, I could call myself a writer. 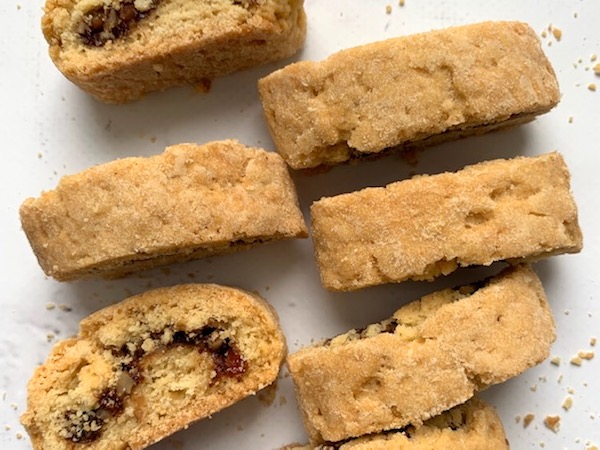 Strangely, I remember nothing at all about the food of Corsica, which I suppose must have influences from both France and Italy, so, unable to give you a genuine recipe, here is one from Crete, another island with its own traditions and sometimes lawless rustlers and hustlers. And because Orthodox Easter doesn’t fall until May 2, here is a sweet that even cooks observing the Lenten fast will be able to make and feed their families: there are no eggs, butter, or milk; just spices, nuts and raisins, olive oil, and some brandy. It bears no resemblance to self-denial.

These biscuits look like fig newtons, but there the resemblance ends. They are much crisper and finer than those cookies we used to munch on during recess.

Dissolve the baking soda in the orange juice. In a separate bowl, beat the olive oil and sugar together with an electric beater for about 5 minutes. Pour the orange juice and brandy into the bowl and continue beating. Add the flour to the liquids, 100 grams (a cup) at a time, stirring all the while with a wooden spoon or beating with the pastry hook, until a dough forms. Knead well until you have a pliable dough.

Preheat the oven to 180ºC (350ºF). Roll out the dough in strips about 30 cm (12 inches) long and 20 cm (8 inches) wide, then place the filling on one side (looks like a strudel), and slice on the diagonal. Lay the pastry on a lightly oiled baking tin and bake for 45 minutes or until the crust is golden. Makes about 4 dozen pieces.

4 Responses to Corsica (Without A Hint Of Napoleon)