Crisis Dues (The Wages of Austerity, in Greece)

“Today at work I learned my pay was being cut by 25 percent. The CEO had gathered the entire staff in the large conference hall and made the announcement. He said it was voluntary. He called it our investment in the organization’s future. But we all knew what it really was. ‘Logo krisis,’ or ‘Due to The Crisis’.” Stefanos Christoforos 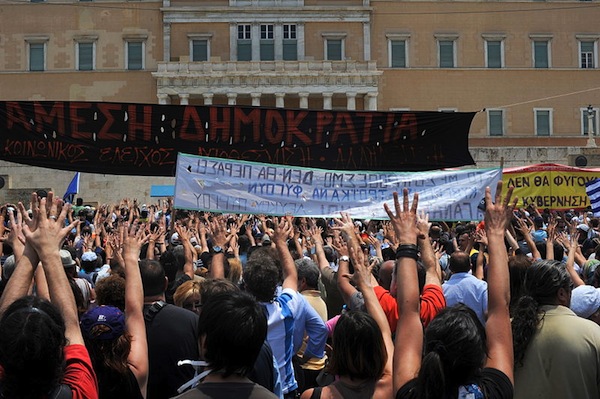 Athenians flash the Greek equivalent of “the bird” at their Parliament building.

ATHENS Greece—(Weekly Hubris)—6/18/2012—Today at work I learned my pay was being cut by 25 percent. The CEO had gathered the entire staff in the large conference hall and made the announcement. He said it was “voluntary.” He called it our investment in the organization’s future. But we all knew what it really was: Logo krisis or, “Due to the crisis.”

So many of our conversations in Greece these days seem to begin or end with this phrase. “We’ll probably just go to my father’s village in August this year, logo krisis.” “Logo krisis they decided they won’t heat the apartment building come fall. Half the tenants won’t or can’t pay the common charges.” “Oh, did you hear? Marina’s leaving for Australia. Logo krisis.” “Lentils, logo krisis.”

It has become our Insha-Allah, a mantra of our helplessness. Along with chunks of our salaries, pensions and, yes, privileges, we are losing as well the illusion that we are in command of our lives. Things now happen to us. And they are usually bad things.

It is not that we have necessarily become pessimists. It is not that we see or interpret things more negatively. Rather, we have become more adept at reading what is likely to come next. We do not see a half-empty or half-full glass. Instead we see a glass that will have much less water next month or next year.

I wasn’t shocked by the announcement. All of us at work had seen it coming. The signs were there: fewer clients, budget cuts, personnel transfers. Staff who left or were fired weren’t replaced. Indeed, most of us wondered why it hadn’t happened earlier. Logo krisis.

I wasn’t angry, either. Who should I be angry at (first)?

For better or worse, I don’t subscribe to the conspiracy theories popular on both the Right and Left, which attribute Greece’s woes to the machinations of a (mostly German) cabal of ministers, bankers and industrialists—often conveniently conflated into a demonized Merkel as the personification of the enemy—bent on stripping Greece bare of its assets, talent and autonomy.

I am angry, of course, at this absurd insistence on the “save-till-you-die” austerity program we have been obliged to implement. But I am just as angry at our government’s failure to implement the great majority of structural reforms which comprise the most important part of the bail-out “Memoranda” and which, had they been implemented, would have obviated the need for the crueler measures adopted later.

But, then, I must also be angry with the trade unionists and the guilds of the closed professions that managed to throttle the few tentative efforts at reform. I can be angry about the political leadership of the country over the last 25 years and its particularly perverse and profligate policy of redistributing income, not from the rich to the poor (the rich got much richer during these years) but from future to current generations.

I’m angry at them for fostering a bloated, inefficient, corrupt public sector that was used to provide countless jobs that didn’t need to be done.

But, then, I must be angry, too, at our own complicity in this system (as I’ve written before, clientilism politics doesn’t make sense without clients).

Sooo . . . I wasn’t indignant. The salary cuts were introduced fairly. No cuts for the lowest-paid workers and then a sliding scale of progressive cuts. I couldn’t even feel sorry for myself, which is not something I ordinarily do anyway, but one could argue that upon losing a fourth of your salary you enter a period when you have the right to feel miserable. But doing so would have felt, I don’t know, so petty.

I once had surgery for hernia repair in a large public hospital. I was in a large ward with another four or five patients, and I remember how reluctant I was to call the nurse the night after the operation to ask for some water, even though I must have been severely dehydrated. Still, the man next to me had had his leg amputated, and the guy across from me had had a tumor removed: how could I complain of being thirsty?

As my friend Natalie, who’s also had to accept a cut in salary, says, “It’s not dire. Having to feed a family of four on €50 a week is dire.”

And she’s right, of course. I still have a job, though for how long I’m not sure. I still get paid for doing my job, which is no longer a given in this country. I’ll now buy cheaper wine and take fewer taxis. I’ll travel less and more wisely. But these are minor deprivations; hardly sacrifices. They are not things like heat and homeland. I may be thirsty but I have not lost a leg.

Loss becomes relative, not only to what has befallen others but what is likely to befall you, yourself, in the future. Now, logo krisis, we can’t console ourselves by believing that things can’t get any worse and if we just pull through this patch of misfortune we’ll be all right. Instead, logo krisis, we console ourselves, for the time being anyway, knowing that things will get worse; and content ourselves with what we have now.

When Greeks exchange holiday or birthday wishes, they are quick to tuck in a little phrase: Iyia pan’ap’ola or, Health above all. It tempers the hubris of wishing for a long life and everything else one could want. It, too, is a kind of Insha-Allah, but a counterweight to logo krisis, a reminder of our mortality and a call to focus on what is important in life. Health, yes, and friends and family. Taking care of yourself and the people you love. Setting things right.

But I don’t see much will for reform in the country, much less the infrastructure and mechanisms to implement it. Of the two, will is the more important; the rest may be acquired or learned or borrowed. I wonder how many of us have realized the extent of reform that must occur if we are to prosper. How much needs to be done to create a system of just taxation, in which all pay their due share, what changes need to happen to open up the economy and reduce waste and corruption in the public sector. The rise of the Left- and Right-wing anti-“Memorandum” parties, which seem to promise a return to the way things were ten or 15 years ago, suggests that many haven’t.

At some point in the future, a future bleaker than what we are experiencing now or perhaps can even imagine, we will be obliged to change.

If this is hope, it is one that is steeped in tragedy.

3 Responses to Crisis Dues (The Wages of Austerity, in Greece)