“Without being effusive or sentimental (difficult!), I now wish to share what those Blue Ridge acres mean to me . . . and to Bob. First of all, they represent rootedness, a place where four—and now five—generations of us have toiled, hunted, played, built, greeted newborns and visitors, reclaimed a family graveyard, and buried kin.” John Idol 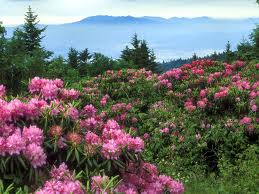 BURLINGTON North Carolina (Weekly Hubris)—6/1/2012—On the cusp of age 80 and roughly 145 years after my great grandfather John Nicholson Idol bought a spread of some 130 acres of Blue Ridge Mountain farmland, I sold my ten acres of ancestral property to my brother Bob, who was kind enough to allow me the lifetime use of it. My failing health left me unable to care for it, even though it is meadowland, but for a two-acre stand of white pine.

After selling a portion of it to pay for a trip to Arkansas to look for better farmland, my grandfather Rufus Idol returned to Deep Gap, dug in his heels, and held on to the remaining 100 acres until he divided it among his three children.

He was a good steward, looking mainly to his son and grandsons to help plant, tend, and harvest his crops. The part that passed down to my dad was split among brothers Jim, Bob, and me. Childless myself, I tried to devise a plan to give equitable shares to my 13 nieces and nephews. “That won’t do,” I told myself, “since most of them, having no emotional ties to the land, will likely sell their portion to strangers. And that’s the very last thing I want to happen.”

Someone with deep emotional ties as well as children and grandchildren would be a better guarantee that the land would remain in the family. That someone was my brother Bob, whose acreage adjoined mine. I told him to make me an offer, knowing that his best would fall short of what I’d get on the open market. The land passed into his hands on May 17th of this year, with a provision that I’d retain lifetime use of it.

Without being effusive or sentimental (difficult!), I now wish to share what those Blue Ridge acres mean to me . . . and to Bob.

First of all, they represent rootedness, a place where four—and now five—generations of us have toiled, hunted, played, built, greeted newborns and visitors, reclaimed a family graveyard, and buried kin.

In their modest sort of way, they are—uplifting. The highest part of them I dubbed “Idol Mountain,” but on visiting me there, my fellow Weekly Hubrisian, Skip Eisiminger, asserted that he’d not claim for it any title loftier than “knoll.” Seen from any point except the east, a knoll it surely is: a swelling in the earth that rises no more than 200 or so feet above a plateau of 3,000 feet. But, on the east slope, there’s steepness enough to set a climber huffing and puffing before reaching its highest point, the family graveyard. No Olympus or Everest, for sure, but enough to lift one’s eyes skyward.

And then, in late spring and early summer, it becomes something spectacular: a couple of acres of mountain laurel join the abundant growth of ferns and wildflowers and catch and hold our eyes as the pinkish white caps dance in a Blue Ridge breeze. Here is a garden of flowers on soil Brother Bob and I sweated to reclaim after our Dad’s attempt to turn the east slope into pastureland was swept away by a flooding downpour, leaving mostly rock and slivers of bright mica in its wake.

Part of that reclamation project continues today due to the dedicated labor of Bob’s wife, Evelina, who has planted scores of daylilies in the steepest spots. A few of them escape the eager mouths of deer and add their beauty to the slope.

Standing near a spot where I could admire the mountain laurel, I had a double reward one morning. The glory of the moment I tried to capture in verse:

At dawning, Homeric, rosy of finger,
Phoebus slanting to miss the Blue Ridge,
glowing pink where his steeds prance,
bride’s mother mauve at the edges,
Monet pastel pinks floating in the west,
dewy lips of half-awakened virgins in
clouds hanging in the middle distance.

Then, charcoal and pink of the mid 1950s.
Then, no visible cause to tell why,
charcoal alone.

But for an instance. Next, gold, most brilliant
where Phoebus urges his horses on,
but richer, higher-careted at the fringes . . .
Gold that no miser could hide, so farflung
the rays in the morning sky.

Nothing gold could stay. Then platinum
so luminous that it dazzles the eyes,
not merely splashed on edges of clouds
but imbuing the whole where Phoebus
holds the reins of his heaven-mounting horses,
all Deep Gap embraceleted,
Idol Mountain scintillated.

Then, Greek no more, but wondrous white
pillows drifting under Carolina blue
as workaday beams now glow upon my Blue Ridge home. 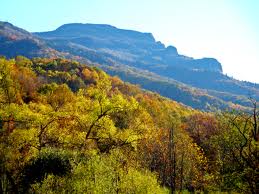 The recumbent god of Grandfather Mountain.

That workaday world during summer found us chopping weeds in a corn patch or plucking bugs from potato leaves, a messy chore since the bugs oozed a gummy glue onto our fingers before we plunged them into jars filled with kerosene.

Under autumn skies, we had golden brown shocks of corn waiting to be shucked as we came back from Granddad Idol’s grape arbor with buckets and baskets of Concord grapes for Mom to transform into jelly, jam, and juice. Of course, as we walked along towards home on the southwestern slope of Idol Mountain, we enjoyed a Bacchanalian treat of luscious grapes, our fingers and lips stained a tattletale blue by the time we reached Mom’s kitchen.

Except for a few outings to hunt rabbits, we saw little of Idol Mountain under wintry skies. If we were on the mountain top on a Saturday morning, we could watch Granddad Rufus, egg and butter basket tucked to his chest as he made his weekly trip to Deep Gap Cash Store, peddling eggs and butter along his route, to buy some essentials for his and Grandmother’s household: salt, pepper, and sugar (and, just as essential, her glasses of Dental Scotch snuff and his Brown Mule chewing tobacco). His image comes back to me as he strides, windblown, across the mountain top in his denim overalls and jacket and pancake leather hat, ear flaps pulled down snugly.

Long after Rufus made his final trek across the mountain and Dad had joined his forebears in the Idol graveyard, I parked a 33-foot Prowler camper about 300 feet from the cemetery on the best spot for a view of mountains to the west and southwest. Given the fog that often clung to the mountain top, I stared into grayness many days, but when rains and winds bested the fog, I had a Carolina blue setting for Grandfather Mountain, at one time considered the highest peak in the Blue Ridge, at close to 6,000 feet.

On those clear days, the rugged profile of a recumbent humanoid head stood out starkly. Since the view from my camper is one of the few remaining places in the county with a clear shot at The Grandfather, the site, if marketed wisely, would fetch far more money than I was accepting for the ten acres I sold to Bob. Blood is much thicker than greenbacks!