Dancing on the Point of a Needle: Angels

“Is man an ape or angel? My lord, I am on the side of angels.” —Benjamin Disraeli

“The local devils are better than angels from abroad.” —Arab Proverb

CLEMSON South Carolina—(Weekly Hubris)—7/25/11—Once a month, the university where I once taught, sponsors a nature walk open to the public that’s led by a retired member of the biology department. On one of these narrated walks through the school’svast forest, a first-time walker spotted a feather amidst the leaves and happily exclaimed that it must have been lost by the Holy Ghost. Our guide, a religious man himself, was in a bind: it was obvious to most of us that the feather was from a wild turkey (they are frequent visitors in these sheltered woods), but there was the off chance that it had been shed by an angel.

Our normally voluble guide was tongue-tied by his reluctance to quash this woman’s naïve faith and the implicit need to identify the feather as his training had taught him. One side of me wanted to say that our wing-nut had been “touched by an angel”; another was tempted to say “touched by an anvil.”

Fortunately, a trillium caught someone’s eye, and we quickly resumed the path we’d been following before being yanked into Cloud-cuckoo-land.

The incident with the feather piqued my interest in the well-trampled field of angelology. 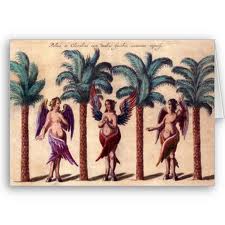 One poll I found revealed that 70 percent of Americans believe in spirits who serve the deity, but only 50 percent think they have “guardian angels.”

Neither Americans nor Christians are unique in their beliefs, for most of the world’s religions have a niche for incorporeal messengers who do the bidding of a higher power.

One explanation for the universality of angels derives from the Great Chain of Being, which most cultures acknowledge in some form or another. According to this theory, early humans recognized that the differences between, say, a salamander and a lizard, or an oak and an elm, were very small. So, the difference between man and God on the Great Chain seemed so incomprehensibly vast that angels were created to plug the outsized link. In Western mythology, we know that one man, known only by his pen name, Dionysius the Areopagite, almost single-handedly created seraphim, cherubim and the rest of the nine orders about AD500 because, to him, “angel” was too small a link to bridge the gap.

Another theory to explain our feathered martyrs comes from the field of alchemy. To the earliest chemists, who left no cloud unturned in their search for gold, the process of sublimation was clearly a talent possessed by some substances but not all. Since camphor, for example, naturally changes from a solid to a gas without liquefying, why couldn’t some divine favorites be transubstantiated? Sublimation, therefore, convinced many in the Church to place angels in the natural-supernatural hierarchy.

A third theory holds that since priests were dependent on the hospitality of the folk at a time when taverns and inns were scarce, they needed to insure that travelers were accommodated. The feeding and sheltering of strangers, therefore,was an early sign that one was a good citizen and worthy of salvation. Many religions told stories of angels, some assuming animal form, some human, living among ordinary people, testing them for the afterlife.

A starving Celt, for example, was reluctant to kill a swan because it might be divine. After all, swans are white, feathered, winged, and show few signs of aging. On the other hand, Teutonic priests encouraged their charges to believe they were “angels in training,” and to fail the test of hospitality was a one-way ticket to hell.

Once people were sold on the terrestrial presence of angels, they naturally wanted to know what they looked like. The answer largely depends on the writer or visual artist one studies. The Archangel Michael of Moses was a fearsome creature, who might cut a person in two for attempting to trespass in Eden, yet the cherubs of Raphael are adorable puppies.

Oh, and they frequently burst into flame because such was the incendiary passion of their hymn: “Holy, holy, holy.” Often they did not make it to the second “holy” before they flamed out prematurely.

Cherubim, said Dionysius, have only four wings, but then they have four faces to cover. Ezekiel claimed that cherubs have wheels as well as wings, but he does not elaborate on the drive mechanism.

The Muslim conception of the houri is almost as strange as wheeled cupids: according to various Muslim authors, the angelic women, who were 75 feet tall and served the heroes of Islam, did not menstruate, urinate, or defecate. After intercourse, they conveniently “revirginated” so that their genitals were always “appetizing.”

Though Muslim males in paradise are assumed to have intercourse with the gargantuan houris, sex with an angel was considered taboo in most religions. Though an exception was made for Mary’s dalliance with the Holy Spirit, Christians believed that the offspring of such a coupling would surely be a demon. As for sex between angels, one author stated that it was acceptable in the eyes of the Church, akin as it was to two clouds merging. This chaste assimilation allowed the seed to be delivered while the hymen remained intact.

Though the form of angels has never been agreed on, many have wondered if there are enough to go around.

St. John the Divine calculated the population at “10,000 times 10,000,” or one hundred million. Why that didn’t settle the matter for Christians is not known because one anonymous scholar offered that it was the same as the number of stars, since every star had its heavenly protector. A 14th-Century Jewish cabalist maintained that the celestial census had grown to precisely 301,655,722. In the 16th century, St. Albert the Great revised that number, claiming 399,920,004, or roughly a one-third increase in 200 years. Though some have expressed doubts, one can only hope that sex in the clouds is as good as it is on Earth.

Gustav Courbet, the French 19th-Century realist, agreed to paint an angel if the priest, who offered him a commission, would show him one. Like the British scientist, J.B.S. Haldane, Courbet was a painstaking skeptic. Haldane calculated that angels would need legs like toothpicks and pectorals that projected four feet off the rib cage in order to fly. Apparently, the good scientist rejected the angel-as-smoke concept.

As for myself, I prefer the “angels” who move among us in brittle bodies like my own.

Before my Aunt Laurie surrendered her driver’s license, she told me of a stranger who had done her a good deed. Laurie had pulled up under a traffic light in rush-hour traffic wanting to make a left turn off a five-lane highway. When she realized the danger inherent in that plan, she decided to wait for the left-turn arrow and backed up to within inches of another car.

As she was waiting for the green, a stranger pulled alongside and said through the open windows, “My Dear, if you accelerate, you’re going to hit the car behind you.” Startled, Laurie looked down at her shift lever and realized she was still in reverse. The stranger had apparently seen my aunt’s back-up lights and forecast the accident in the making. Laurie’s only regret is that she never had a chance to thank the woman in the visible choir, who sped off to deliver-from-evil someone else.