“Silent snowfall on deep woods; the crunching of my footsteps in the dry, thick snow; the promise of a warm fireplace and hot cocoa when I reached home and shed my winter clothes.”—Eddie Higgins

This painting is the second of my three depictions of Peggy’s Cove, Nova Scotia. I love to walk in a heavy snow storm. Whenever I gaze at this painting, it draws me in; then transports me to another white-out, the great blizzard of 1978, when the snow was five feet high. People were walking in the blinding snow with wooden, tennis racket-like snow shoes. No cars were allowed on the streets of Newton, Massachusetts for five days. I shall never forget that storm. 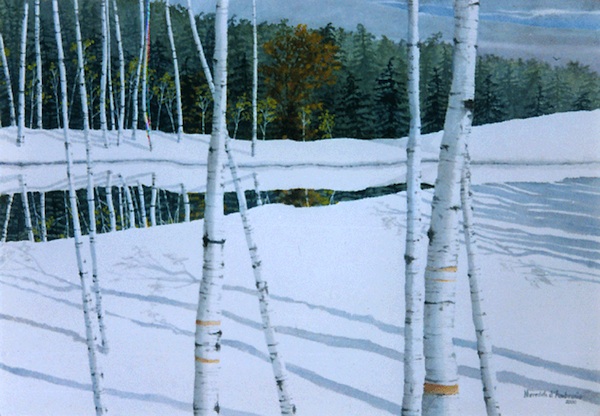 Every other weekend in the mid-1970s, I would travel from Boston to New Hampshire to explore different towns. I was enthralled by this pristine scene with its simplicity of line and spacial relationships. Because of this, snow scenes have become one of my favorite subjects to paint. 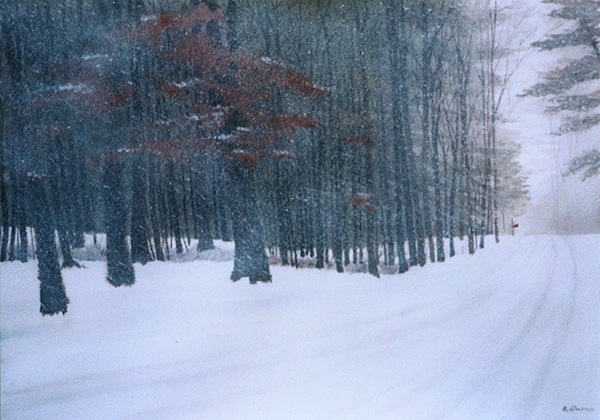 Here is what my late husband, Eddie Higgins, had to say about this painting: “Having grown up in New England and having spent the first 18 winters of my life there, this scene really speaks to my childhood memories. Silent snowfall on deep woods; the crunching of my footsteps in the dry, thick snow; the promise of a warm fireplace and hot cocoa when I reached home and shed my winter clothes.”

Note: Meredith d’Ambrosio includes a quote from jazz pianist, composer, and orchestrator, Eddie Higgins. For more about Higgins and his work, go to: http://en.wikipedia.org/wiki/Eddie_Higgins (and to his YouTube clips, such as http://www.youtube.com/watch?v=D0zJmvJE8_I).