“One day later, it began to snow again—a second storm! I ventured outside with plastic bags strapped to my boots and leggings, and plodded through the white-out to a steep winding downhill road, carrying a thick wooden board. I planned to sketch the barely discernible scene at the bottom of the road.”—Meredith d’Ambrosio 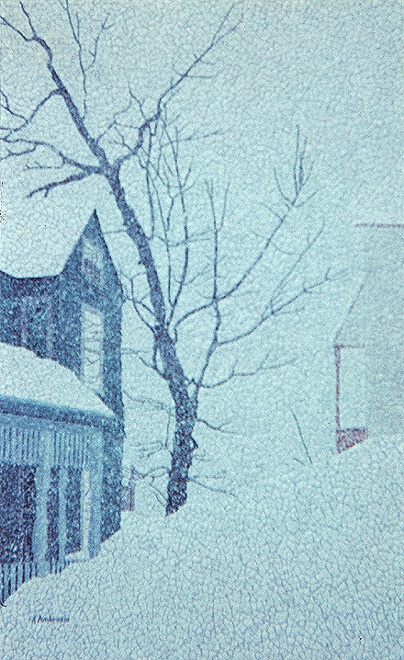 I lived in Newton, Massachusetts in the 70s in a garret apartment with a ladder in the piano room which led to the roof. My mornings were spent on the roof eating breakfast. A towering, sprawling old copper beech tree covered the front yard, so huge that it almost hid the house from sight. The house was a graceful stucco Victorian mansion with green trim. From the housetop, I could step onto one of the branches of the beech. I could see the whole city of Boston from the roof, and named it my tree house. The great blizzard of 1978 hit Newton with five-foot-high snow mounds. Cars were forbidden to be on the streets in Newton for one week. I watched people below making tracks with their skis and snowshoes, which looked like tennis rackets. One day later, it began to snow again—a second storm! I ventured outside with plastic bags strapped to my boots and leggings, and plodded through the white-out to a steep winding downhill road, carrying a thick wooden board. I planned to sketch the barely discernible scene at the bottom of the road. Trudging back home in this treacherous storm was even more difficult, climbing the steep hill through the high drifts, but I was looking forward with excitement to beginning my next eggshell mosaic. The blizzard seems like yesterday. I shall never forget it. 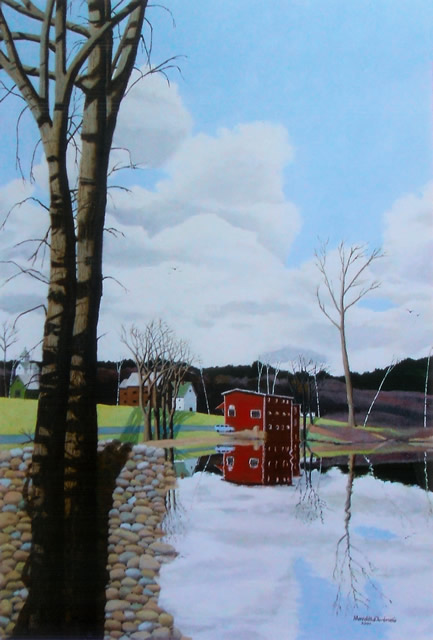 After an afternoon of exploring and memorizing the tiny town of New Boston, New Hampshire, my friend Fred and I picnicked on a hill after the completion of my final sketch. We decided to search for another place near this picturesque hamlet before the daylight dwindled. Instinct suggested that we should head northwest. Soon, we were passing through an intriguing scene in Goffstown. Glen Lake was inviting us to stay. I found an area near the lake to sit and sketch. The shape of the old church in the far background immediately caught my attention. Soon, I was concentrating on the shapes and colors of the rocks and on many other details in this scene. It was almost dark, so I took a photograph to remind me of details I might have missed. We were heading back to Massachusetts with many beautiful scenes of the day swimming around in my imagination. 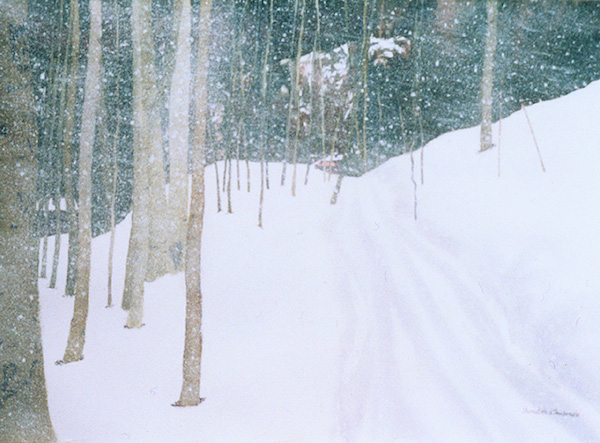 On our walk around the Taos Upper Valley my late husband, Eddie, and I found ourselves suddenly caught in a blizzard. Details along the road became difficult to discern. Beyond the faint car tracks, the snowy hill in the distance appeared like a big white bear crawling up the hillside. When we saw that image, we knew it was time to head back to the Thunderbird Lodge to prepare for the night’s concert, lest we lose our way. I quickly jotted down a few scribbles on a small pad and we retraced our steps to safely return to the lodge.