“Maroussi would be an idyll that lasted almost two decades. I would meet the rest of my neighbors, who included a quintet of wonderfully eccentric older ladies, Greek, English, and Maltese; an academician/professor of philosophy; the mothers—as stout as one of the house’s heirloom wardrobes—of boys who would become Duff’s pals; an English woman my own age with three small kids who had known Alexi’s second wife on Rhodes; the local postman and his dog named Jack . . . .  It was a community. Not a typically Greek one at all, the kind you see in movies or sitcoms, but Greek enough for me.”—Diana Farr Louis 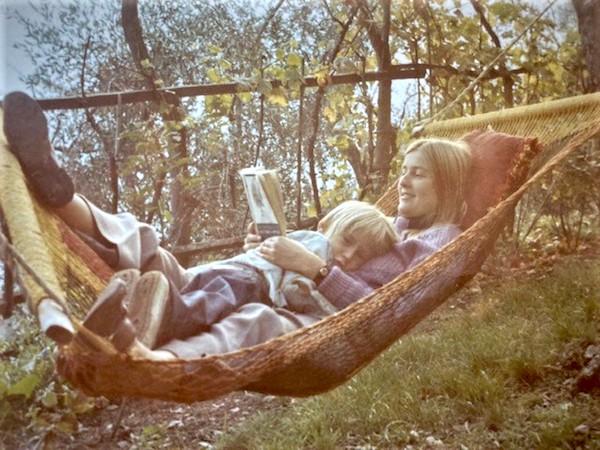 Diana and Duff in Rapallo.

ATHENS Greece—(Weekly Hubris)—(First Published on June 4, 2012)—This year, the fourth of June is a red-letter-day for me. Or perhaps I should say a blue-and-white day, for it marks my arrival in Greece as a permanent resident in 1972, nine years after that fatal first summer on the enchanted island of Spetses.

Like so many major decisions in my life, this one did not seem momentous at the time. I’d already made the quantum leap across the ocean from New York to Rapallo, so Greece was but a blink away. The suggestion came in the form of a phone call from my not-quite-ex-husband: “My uncle has died, so the Maroussi house is free. If you feel like it, you could take Duff [our son] and live there for a while.”

The timing was perfect. The rent on the Rapallo cottage was about to soar for the summer, my Italian gentleman caller was leaving for post-grad studies in New York, and I missed the Aegean.

“Sure, why not? I always wanted to spend a year in Greece,” I said as I accepted the invitation. I dreamed of moving on to Istanbul, Cairo, Damascus, giving each exotic city a try as I circled the globe.

But first I flew to Athens for a quick weekend to case the joint. What kind of a house was this? I’d heard the family legends but never seen it.

To guide me, I called upon an American friend who had also married a Greek and made the leap a year or two before. John “Exoklissi” met me at the airport and we drove up to Maroussi, where Alexi’s uncle’s English widow and her mother were still domiciled. They graciously showed us around and gave us tea in a dark Victorian room so overburdened with spindly chairs and tables, fussy crockery, and antimacassars that it could have been the Old Curiosity Shop. But a potential home?

I apologized for being the cause of their departure and later asked John, “Is it a nice house? I can’t tell. What do you think, can I be happy here?”

“It’s a marvelous house,” he said, “one of the best I’ve seen. And the garden alone is unique.”

My mother-in-law, Dodo, who’d once told me she’d never play that role, reversed herself for the one and only time and practically forbade me to come, sternly warning, “You’re making a big mistake.”

Marina, my sister-in-law, said, thinking of 1940s communications, “I’m afraid you’ll be lonely. It’s so far away from Athens.”

And Nata, an artist and Duff’s godmother, made the wisest comment of all, “You’re too young to come to Greece. Life is too pleasant here. It will rob you of all ambition and you’ll never do anything serious. This is a country to retire to.” 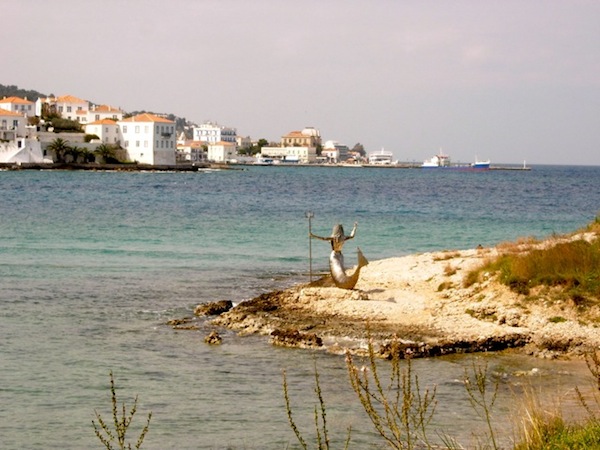 But my mind was made up. It’s a funny thing about Libras; we have trouble deciding between vanilla and chocolate, red and white wine, and we’re always the last in the party to order from a menu, but present us with something life-changing and we never hesitate.

One month later, I crammed all our worldly possessions into my college trunk and a few boxes, said good-bye to my parents and Rapallo friends, and drove to Genoa in my second-hand white Cinquecento. The farewell was nothing like my dramatic departure from New York nine months earlier. In fact, I remember nothing about either it or the voyage to Piraeus except that we stopped at Naples and Duff and I watched skinny ragazzi diving for coins at Santa Lucia while we had lunch at a trattoria.

On June 4th, John met me at the boat and led the way from Piraeus to Maroussi. Don’t know how I extracted the car from customs; the rest of the luggage stayed behind and was collected somehow.

Up at the house, on the corner of Praxiteles and Prometheus streets, a welcome committee had assembled. Half the neighborhood had turned out to greet us. I can only suppose Dodo had told Joanna Londou and her mother, and the jungle drums had spread the word.

The family across the street emerged with smiles and perfect English: Rania, a dancer; Tony, a lawyer, Nikoli, a dark-haired, bike-riding nine-year-old; and Yorgaki, a three-year-old with one leg in a cast. With them was Irini, his Nanny from Ikaria, who Rania said would help me get settled.

The settling-in process started at once. Realizing the Cinquecento was empty, Rania and Irini went home and came back with armloads of sheets, towels, pillows, and a couple of light blankets. The house had four beds and three vast cupboards, but that was all.

Meanwhile, a third woman joined the party. Kyria Ioanna lived around the corner and, as I was to learn, she was one of those people who genuinely lives for others. “Professional Do-Gooder” has sanctimonious, phony connotations, but Kyria Ioanna—always addressed with the honorific Mrs. or Ma’am—was altruistic to a fault. When, many years later, she got breast cancer, she chose to ignore the tumor since an operation would get in the way of feeding and nurturing her extended family. When she finally took time off to see a doctor, it was too late.

On this occasion, Kyria Ioanna had arrived with a small stew pot wrapped in a spotless white dishcloth, and all the paraphernalia required for a meal: plates, glasses, knives, spoons, forks, maybe even napkins.

To say I was overwhelmed would be an understatement. This was the sort of kindness that I’d read about but never experienced. When I moved into the charming little house above the Rapallo yacht club, I never knew my neighbors, who all lived in palazzi surrounded by grand gardens. My first visitor there was a representative from a security company who threatened me with burglaries if I didn’t sign up for night-watchman protection. Unaware that my landlady already subscribed to this service, I complied and spent the night quaking at the hesitant footsteps of prowlers—which, come morning, proved to be fat eucalyptus seeds plopping arrhythmically on the terrace outside my room.

In Maroussi, thievery was unknown. In fact, in those days, when a major burglary occurred in Athens, all the police went to the western port of Patras to apprehend the gangsters, who had to have come from Italy.

Maroussi would be an idyll that lasted almost two decades. I would meet the rest of my neighbors, who included a quintet of wonderfully eccentric older ladies, Greek, English, and Maltese; an academician/professor of philosophy; the mothers—as stout as one of the house’s heirloom wardrobes—of boys who would become Duff’s pals; an English woman my own age with three small kids who had known Alexi’s second wife on Rhodes; the local postman and his dog named Jack. . . . It was a community. Not a typically Greek one at all, the kind you see in movies or sitcoms, but Greek enough for me.

There were no apartment houses at first; dirt roads, no fears of intruders. On one of those early nights, I put my son to bed without closing the kitchen door. When I came back, the half a chicken I’d left on the plate had vanished, stolen by a villainous tomcat. That was the extent of crime in the neighborhood.

Over the years, it would change. People would die or leave. My circle of friends would expand way beyond Maroussi. But that welcome given so spontaneously and generously on the 4th of June, 1972, set the tone for my life in Greece.

Holidays on Spetses had spoiled me, but it turned out that living full-time in Maroussi was even more of a holiday. Nata was right: if I’d wanted a career, I should never have settled there. But to me that was secondary. It was Greece I craved.

Forty years later, having witnessed the Junta and its collapse, the return of democracy and Karamanlis, the populism of Andreas Papandreou and his infamous Green Guards, the increasingly venal political scene, and our current volatile predicament, I continue to find the same kindness, hospitality, and friendship offered to me that first June day.

What do you suppose Kyria Ioanna had cooked in that miraculous pot? Surprisingly, it is not etched upon my taste buds, but I think it must have been Kokkinisto, the universal Greek “red” stew. This would be my own version, nowadays.

I’d sauté some cubed beef or veal in lots of olive oil, browning it on all sides. Then I’d remove it and wilt some sliced onions. I’d pour some red wine into the pan and bubble it down, put the meat back in, along with a can of chopped tomatoes, a couple of bay leaves, a tablespoon of my homemade tomato paste (which is nothing more than fresh tomatoes boiled with sugar until practically caramelized), some hot pepper flakes, and some crumbled oregano. About 5 minutes before it was done, I’d crush 4-5 garlic cloves into the pot and throw in some chopped parsley. And I’d serve it with some egg noodles.

Note: I would have liked to illustrate this column with a photo or two from my Maroussi days, but I can’t find a single one in any album or basket.