“There is a therapy . . . which has proven efficacious . . . in improving joint function . . . . But you are not likely to hear about it from your orthopaedist.”—By Sanford Rose 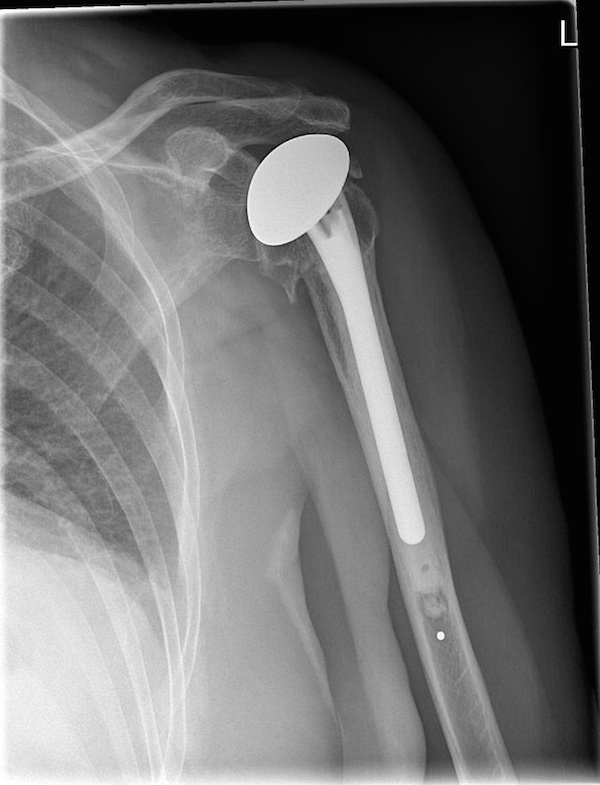 Shoulder prosthesis: pretty, but was it necessary?

KISSIMMEE Florida—(Weekly Hubris)—7/28/2014—Dispatches from OO? Remember that I live at the junction of Laminectomy Lane and Arthroplasty Avenue in a town that might be called Orthopaedists’ Oasis.

What’s that? You may remember the place as Quackery Corner. Yes, that name serves as well.

It’s a place in Central Florida where old folks live and spend the better part of their days in the waiting rooms of orthopaedic surgeons. It is really Any Town, Florida.

Now, I have nothing against orthopaedic surgeons (well, not much).

I don’t resent the fact that they are America’s highest-paid medical specialists. (In 2012, 20 percent of orthopaedists reported earning over $500,000 a year.)

I don’t resent the fact that they are men (mostly) of usually less than transcendent intellect.

But I do resent (just a tad) that they are responsible for many of the most unnecessary surgeries performed in the US each year.

This includes principally knee surgeries. (Even the American Academy of Orthopaedic Surgeons chides its members for the alacrity with which they rush into operations for the repair of meniscal tears.)

But there are other surgeries that may also be a mite more preventable than your run-of-the-mill orthopaedist will readily acknowledge.

Go to an orthopaedist with pain in the knee, back, hip, or shoulder, and the first thing he’ll say, if the patient is aged: “You’ve got arthritis.”

Safe diagnosis, that! Most oldsters suffer from osteoarthritis (wear-and-tear arthritis) in the major joints.

Arthritis is the erosion of the cartilage separating one bone from another in those joints, and in its advanced state can lead to bone rubbing against bone, which is exquisitely painful.

What causes it? Sometimes trauma and “overuse.” More often, especially in the lower body, obesity and “underuse.”

What is the remedy? At times, arthroplasty, which is the replacement of the natural joint with an artificial one, or prosthesis, for which we need orthopaedic surgeons.

At other times, a program of weight loss and exercise, for which we don’t need them.

Weight loss self-evidently reduces the loads on joints; exercise strengthens the muscles around these joints and also helps lubricate them, ferrying key nutrients from the synovial capsule to the joint space and disposing of wastes from that space.

But there is no money in talking to patients about weight loss and exercise.

The typical orthopaedic surgeon will at first prescribe a round of corticosteroids for pain reduction, because that is what the insurance companies now demand.

And when that doesn’t help, which is usually the case, it is time for the knife.

Interestingly, there is a therapy involving the injection, not of steroids, but of hyaluronic acid, which has proven efficacious in the relief of pain as well as in improving joint function for up to six months (it can be repeated), both in the knees and the shoulder.

But you’re not likely to hear about it from your orthopaedist.

5 Responses to Dispatches from OO