“It would be sad to have to miss out on the joy of reaching into a damp brown paper bag, removing a fat, soft, whole peanut in its soggy shell, popping the entire thing in your mouth and gently biting/chewing/sucking out the salty juice and the soft-cooked nuts inside . . . and then spitting out the masticated fibrous shell. Fabulous!”—William A. Balk, Jr. 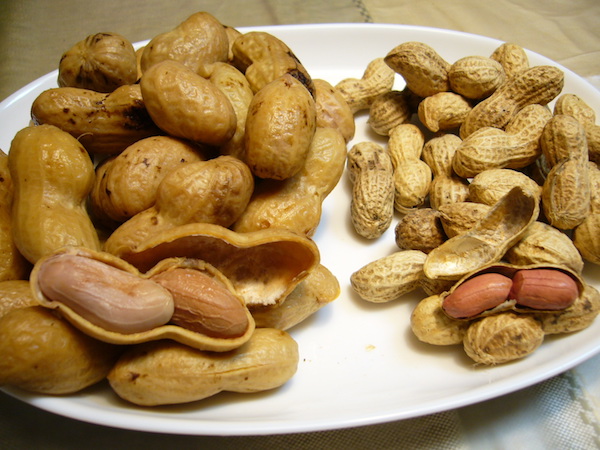 Peanuts: boiled peanuts on the left.

BEAUFORT South Carolina—(Weekly Hubris)—November 2018—‘Tis the season, everyone! Boiled peanuts! That glory of Southern snackdom. There are unpleasant rumors circulating which suggest some people don’t care for the unique, mucilaginous, somewhat saline taste of this rare seasonal delicacy; I’m rather doubtful that these rumors are true, although I do understand that some unfortunate individuals are allergically responsive to nuts and must avoid peanuts. It would be sad to have to miss out on the joy of reaching into a damp brown paper bag, removing a fat, soft, whole peanut in its soggy shell, popping the entire thing in your mouth and gently biting/chewing/sucking out the salty juice and the soft-cooked nuts inside . . . and then spitting out the masticated fibrous shell. Fabulous!

Peanuts (Arachis hypogaea) are a major agricultural crop in South Carolina. Unfortunately, the significant rains and flooding of the last weeks have done serious damage to a number of crops in the state; the worst affected are likely to be cotton, peanuts, and soybeans. Your boiled peanuts may be harder to find and more expensive to buy this year . . . not to mention your soy sauce, your plastics, and all those wonderful cotton T-shirts you wear all year round. The torrential rains arrived just as these crops were about to begin harvest, so a significant percentage of each will be lost to fungal infection, rot, or physical damage. It is, sadly, the farmer’s lot. I did notice, however, my farming neighbor who grows many hundreds of acres of all three—cotton, soybeans, and peanuts—managed somehow to get his peanuts dug, turned out, dried, and harvested . . . all between the devastating rains of Hurricanes Florence and Michael. Much of the cotton crop was damaged in the deluges, but the peanuts were successful.

Peanuts are grown and harvested in a most interesting way. They are, of course, one of the legumes—they are in the bean family. The seeds are planted in rows once the soil is warm enough—above 60 degrees Fahrenheit—and they grow into handsome, lush, low, bushy plants. They require about four and a half months of frost-free weather from planting to harvesting, preferring a sandy soil for good drainage. 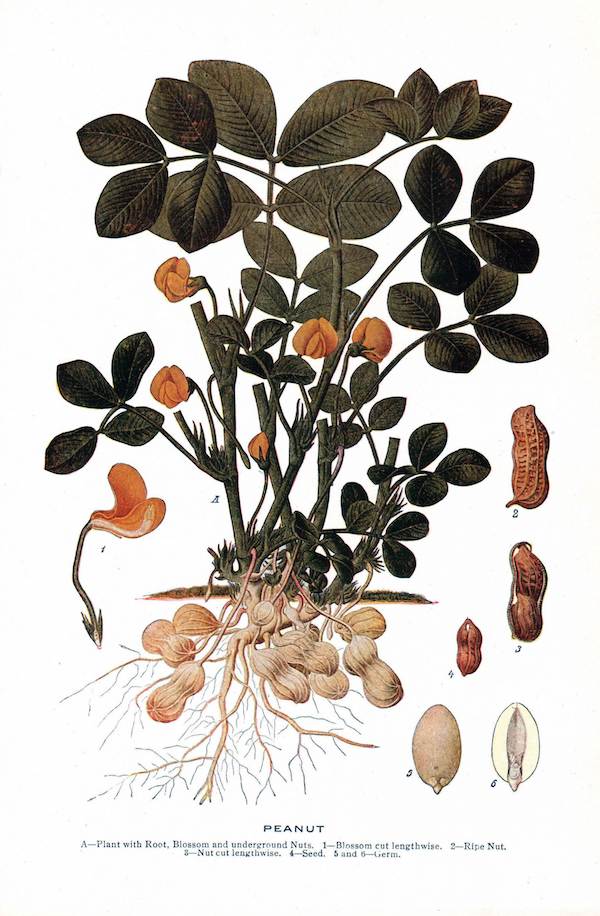 Once the pretty little yellow flowers appear, the peanut is beginning its most unusual stage. The flowers serve their typical reproductive purpose of pollination and fertilization and, once fertilized, the flower stem begins to elongate and droop down toward the ground, taking about ten days to reach the soil.

After perhaps a week, the tip begins to enlarge, becoming the shell and kernel, and it drills down into the soil. Below ground, the peanut then ripens and matures over two months or more before it is ready for harvest.

Harvesting is also a bit different. When the peanuts are fully ripened, before the frosts begin, the farmer must sever the root of the entire plant, lift each plant, shake the soil from around the roots, and invert it on top of the ground, leaving leaves down and roots up. The peanuts are exposed to the air and are allowed to dry in windrows for several days.

After curing his crop above ground, the farmer, using another piece of equipment—a “combine” —goes along the windrow to remove the peanuts from the plant, store the nuts in a hopper on the combine, and return the plant to the windrow in the field.

Further curing and drying is needed before the peanut is ready for market.

Now, is it obvious at how many stages the poor peanut is susceptible to damage from too much rain? All along the way, the plant needs just the right amount of water to flourish and flower and set seed. But once the plant has “pegged” and set its nuts below ground, it is extremely vulnerable to damage or complete loss due to rain. And that’s what happened this year in South Carolina. 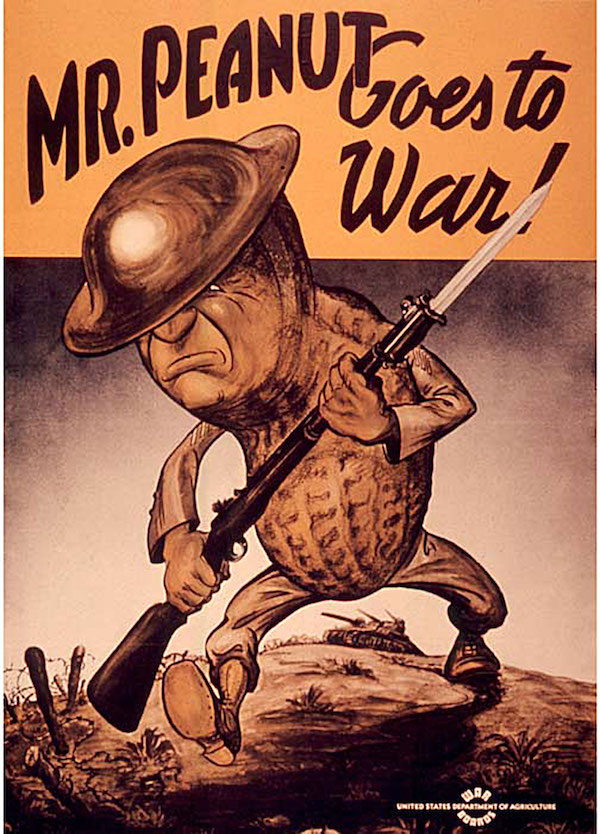 Which is to say, Dear Readers of my little celebration of this rarely-considered nut, cherish your peanut butter this year, rejoice in your deep-frying peanut oil, be thankful for your boiled peanuts. Above all, remember where your food comes from, consider the struggling farmer who brought it to you, and spare a thought for the very many who will have lost their crop—your crop—this year.

Note: The photo of boiled peanuts, by Katorisi, is used under Creative Commons License. The image of the peanut plant and the image of Mr. Peanut are both in the public domain. All were found on Wikimedia Commons