For the Love of Sushi (in Teaneck NJ)

“The story of the Teaneck Sushi Buffet in Bergen County, New Jersey, is actually more of a cross-cultural love story than a fish tale. Tommy McGlew, originally of Fort Lee, and his wife, who was born and brought up in the city of Changle, Fujian Province, in southern China met when Mei Wa was working as a chef in a sushi restaurant where Tommy regularly used to take his then-girlfriend out for dinner. It wasn’t love at first sight.” Elizabeth Boleman-Herring 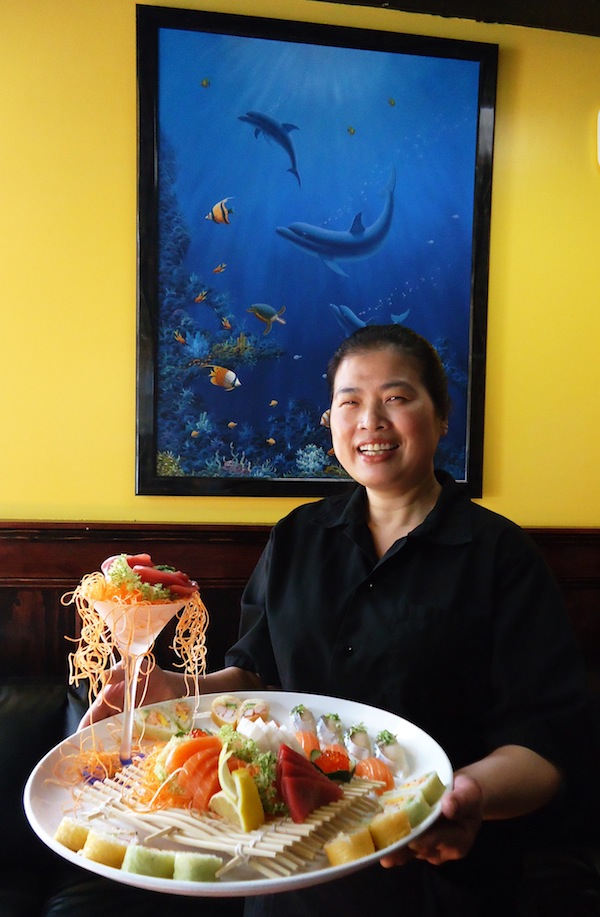 Mei Wa with one of her deluxe sushi/sashimi creations.

Tommy McGlew, originally of Fort Lee, and his wife, who was born and brought up in the city of Changle, Fujian Province, in southern China met when Mei Wa was working as a chef in a sushi restaurant where Tommy regularly used to take his then-girlfriend out for dinner.

It wasn’t love at first sight.

For one thing, Tommy was seriously dating another woman, also coincidentally Chinese. For another, Mei Wa, virtually hidden behind the posts and pillars of the sushi bar, was always swathed head to toe in voluminous, bulky chef’s clothes, topped off by a truly unattractive shower cap: standard attire for chefs at that particular restaurant.

Ironically, Tommy’s then-girlfriend—and they broke up due to his being unwilling to relocate to Manhattan and hers to move out to darkest Bridge & Tunnel New Jersey—actually laid the early groundwork for Mei Wa and Tommy’s love story.

The Changle City sushi chef and Tommy’s girlfriend actually spoke about him one evening, and Me Wa asked her friend, “What’s it like? Dating an ‘American’?”

The girlfriend said, “Oh God, it’s wonderful! He buys me jewelry and other gifts, opens every door for me, takes me out to eat—obviously. He’s fabulous!”

Me Wa filed away that intelligence about the big blue-eyed Irishman and, when Tommy and his Manhattanite split up, and Tommy repeatedly showed up solo for sushi, she was ready and willing to accept his invitation to go out for coffee after work one evening.

Tommy says, “There was only one small catch. Mei Wa knew precisely one word of English back then in 2008, when we began dating.”

But the Mei Wa who showed up to meet him for coffee, fashionably late the next evening, blew Tommy out of the water. He was scanning the parking lot near her work place, where they were to meet, when a vision appeared before him. Gone were the yards and yards of white chef’s gear . . . and shower cap. This young woman was a knock-out.

Tommy says, “All I could think was, ‘How in God’s name did I fail to see her!’ I knew right then and there that I would marry this beautiful, soft-spoken woman.”

Their wedding was celebrated less than a year after their first date. 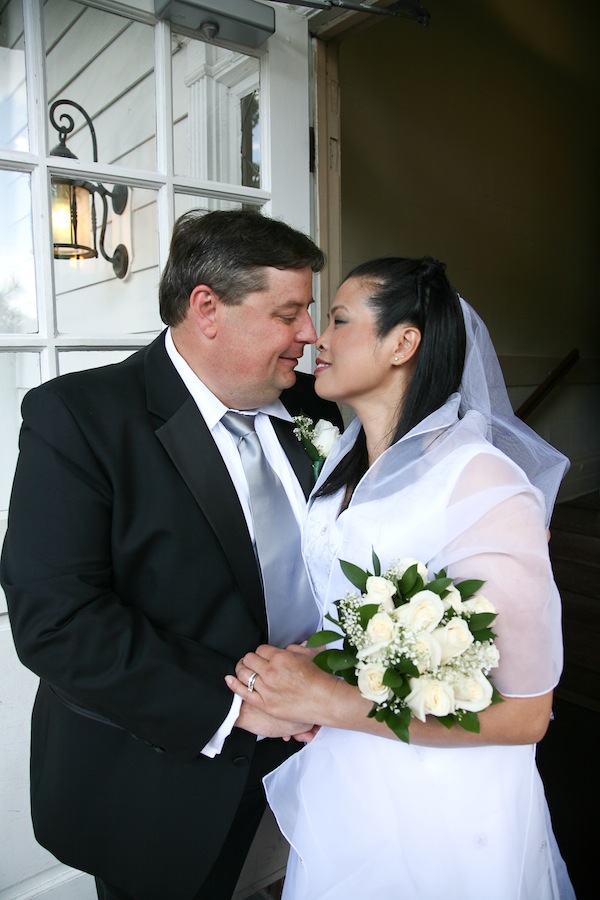 Tommy and Mei Wa, on their wedding day.

When Tommy and Mei Wa met, Tommy had a burgeoning car service business. In 2008, his plum job was a rarity in the Tri-State, which was reeling from the Recession. “I was doing very well,” he says.

But Mei Wa, who had successfully managed a major sushi restaurant in Hong Kong, Genke Sushi, supervising 36 employees, had some other ideas for the couple.

“I recognized that my wife had a gift for working with people, both customers and employees,” says Tommy,” as well as great talent as a chef. I had told her, back when I proposed marriage, that one day, she’d have her own sushi restaurant.”

“We were actually ready to open on 9/11,” says Tommy, “but we gave it a few more days, waiting for a more auspicious date.”

Today, Teaneck Sushi employs three sushi chefs, under Mei Wa’s supervision as Master Chef, all of whom are Chinese-born. The restaurant is staffed by a United Nations of employees: young Mexican, Chinese and Indonesian wait- and kitchen-staff—“. . . and one Pakistani fellow from Guyana,” adds Tommy.

The menu is equally diverse, as Mei Wa and Tommy offer a full sushi and sashimi bar, featuring both starters and entrees, as well as “all-you-can-eat-sushi.”

But there are also Asian Fusion menu items. Says Tommy, “There are Chinese, Japanese, Thai and even some Korean specialties on the menu,” which runs to five long pages.

Tommy and Mei Wa found their current location “despite Craig’s List,” they say. The Craig’s List place they checked out in Teaneck was an absolute dump, admits Tommy but, on their way home, passing an enormous empty storefront on Teaneck Road, Tommy and Mei Wa did a literal double-take and U-turn. The building, with its ample parking and huge windows, right at the corner of Teaneck and Grayson roads . . . was “it” the moment Tommy saw it: “Location, location, location.” 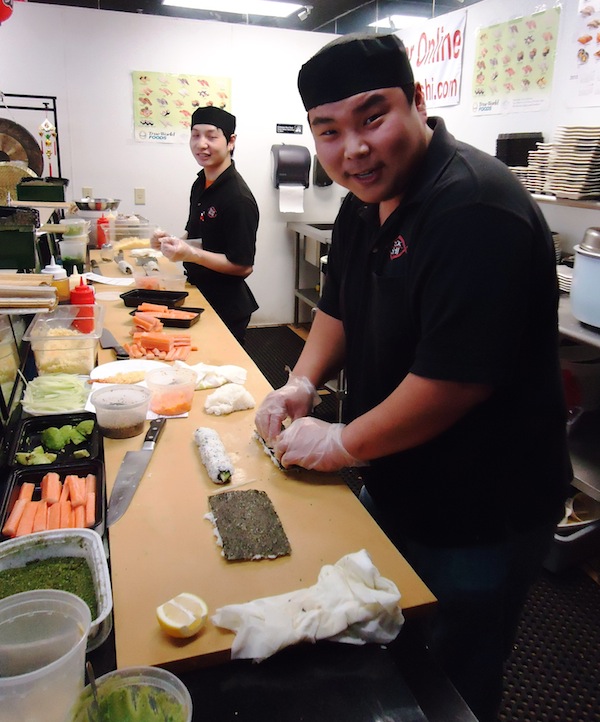 Danny and Elong, at work behind the sushi bar.

“We’ve doubled business in the six months since we opened,” says Tommy, adding: “The secret is just being here. Always being here. I take this place very personally. There’s no substitute for showing up every day to greet the people when they come in and thank them as they leave.”

“The location means they find us,” he says, “the food means they stay; but my and Mei Wa’s daily presence means they come back.”

“Mei Wa, as well as being a Master Sushi Chef, has a real eye as far as the quality and freshness of fish go,” says her husband.

And, after the catch is carefully chosen, Danny takes over behind the sushi bar: a sweetheart, with very sharp knives, and obvious skills. “The bottom line,” says Tommy, “is that Danny’s an artist.”

The food is all presented as beautifully as Danny, Tim and Elong can make it, decorated with sculpted swans of lemon, hillocks of shredded carrot and white turnip, and shrubbery made of flowering kale.

Tommy adds, “Mei Wa makes all our dressings and sauces from scratch, from her own recipes. Most, she developed in Hong Kong.”

And does Tommy now know the Chinese word for “salmon”? 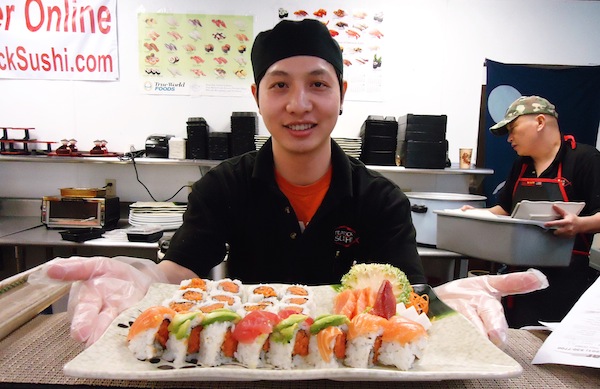 3 Responses to For the Love of Sushi (in Teaneck NJ)