Front-Page News in the UK: Bad to Worse

“The atrocities of March served to take off our front pages here in the UK headlines from the worst week Prime Minister David Cameron has had since he took office. Things had got so bad that Labour leader Jeremy Corbin, Britain’s Bernie Sanders, actually moved ahead in the polls, despite the daily bombardment of lies and innuendo he has been subjected to by our corrupt and venal press, aided and abetted by Right-wing supporters of the war criminal Tony Blair, since Corbin became leader.”—By Michael House 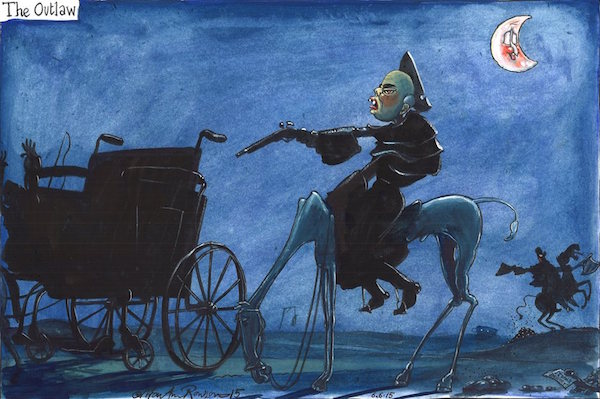 KINGS SUTTON England—(Weekly Hubris)—4/4/2016—The Belgian Islamic atrocities came at a bad time for the Left in Britain. They were predictable, of course. A religion that built its dominance on violence and conquest, whose holy book requires the death of apostates and gays and the oppression of women and unbelievers, is bound to spawn vermin who will slaughter indiscriminately in revenge for the arrest of one of their own. It is hoped that one day Islam will experience its own Reformation, although any latter-day Martin Luther who nails 95 theses on the door of a mosque will probably find himself, as well, nailed to said door.

Not that Christians (and I am capitalizing the “proper names” of all religions under duress, at the insistence of My Editor, *&^% her) can be too smug.

It took hundreds of years for them to stop burning, beheading, and torturing those who had heterodox ideas about their Imaginary Friend and their relationship with him; usually because the dissenters took too literally the humane teachings of the flesh-and-blood moral philosopher Jesus of Nazareth, who (unfortunately for him) ended his days suffering from delusions of grandeur. He thought he was on a suicide mission, sent by god-the-omnipotent . . . just like the Belgian bombers.

The atrocities of March served to take off our front pages here in the UK headlines from the worst week Prime Minister David Cameron has had since he took office. Things had got so bad that Labour leader Jeremy Corbin, Britain’s Bernie Sanders, actually moved ahead in the polls, despite the daily bombardment of lies and innuendo he has been subjected to by our corrupt and venal press, aided and abetted by Right-wing supporters of the war criminal Tony Blair, since Corbin became leader.

Here’s the story. Finance Minister George Osborne introduced a budget in parliament which was a dark mirror image of Robin Hood’s policies, i.e. stealing from the poor to give to the rich. Not to get too technical, he raised the level at which the better-off pay a higher rate of tax, which will enrich yours truly and others by about £700 a year. At the same time, he slashed payments to the variously challenged that enabled them to live more independent lives. To their credit, some of the more civilized (or politically savvy) Conservative MPs thought this was a bit harsh. Of course, Tories always look after their own—that’s what they are in business for—but they usually do it with a bit more subtlety. The juxtaposition of rewarding the rich and screwing the disabled in the same budget was a little too obvious.

Iain Duncan Smith (known as IDS) is a former, unsuccessful, leader of the Conservative Party. When Cameron became Premier in 2010, he gave IDS the job of slashing the welfare budget, which he did with great gusto. An example is what became known as the Bedroom Tax. The working poor receive a subsidy called Housing Benefit (don’t stop reading: it gets more interesting.) IDS’s idea was that if anyone had a spare bedroom, their benefit could be cut to force them to move into smaller digs. The problem was that there was precious little smaller accommodation available, so the poor took the hit. So people who used a bedroom to store the equipment of a disabled relative, or whose son was away serving a short jail sentence, so that his bedroom wasn’t currently occupied, had their benefits reduced by £30 a week—nothing to the millionaires in the Cabinet but, to the poor, the difference between solvency and humiliating dependence on a food bank

Two weeks ago, IDS resigned from the government. In a blistering resignation letter, he said that he had again and again been strong-armed by Finance Minister Osborne into making cuts, but that hitting the disabled was the last straw. It was a very Christian act: as the Gospel states, there is more joy in heaven when a sinner repents that there is over ninety-and-nine just men. (Hence, Shakespeare’s prophetic line “Beware the March of IDS.” Sorry.)

IDS said it was intolerable that the Tories should take money from people who would never vote for them, to give it to those who did. He clearly didn’t understand what his party was for. Presumably, a clone IDS had been operating for the previous six years.

I was reminded of the scene in Casablanca when police chief Claude Rains, pocketing his winnings, said that he was “shocked, shocked” to find gambling going on in Rick’s cafe. Presumably IDS was similarly shocked to find his party screwing the poor.

So, Osborne and Cameron took a hammering. Even the Tory tabloids weighed in with savage criticism. Osborne’s chances of succeeding Cameron shrank, boosting the chances of the media-savvy, follically-challenged buffoon Boris Johnson (Donald Trump with brains). IDS’s enemies said he had resigned in order to give a fillip to the campaign to leave the European Union. His allies said he was a secular saint, filled with a spirit of noblesse oblige. Civil war broke out in the Tory party. It was wonderful.

Then the Belgian bombers struck.

The war of words was driven off the front pages; Cameron was able to make statesman-like speeches  in the House of Commons and rally his troops against the common enemy. It’s an ill wind that blows no one any good.

Note: The cartoon illustrating this essay, by Martin Rowson, derives from The Guardian.