Stealing Home with One Foot on Third: Risk

“Actuarial tables show that far more pedestrians die in a crosswalk than jaywalking. Risk takers often cite those tables as justification for the chances they take. Of course, far more people cross city streets legally than illegally, so it stands to reason that more will die in the crosswalks. Moreover, many jaywalkers are doubly cautious because they appreciate the risks involved.”—Skip Eisiminger

“A Pinch of Peril: The taste of the fugu lies in the risk—/danger’s more relish than any French bisque.”—The Wordspinner 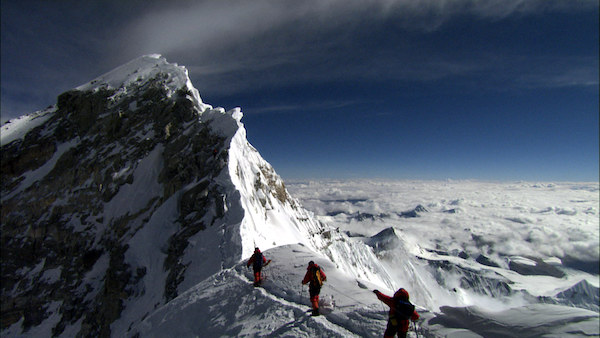 The upper reaches of Everest are known as the Death Zone.

CLEMSON South Carolina—(Weekly Hubris)—4/4/2016—A bright fifth-grader once told me that she could see the world’s tallest mountain from her home in Nepal, so I asked her, “Do you know who was the first to climb Everest?”

“Tenzing Norgay!” she said proudly. “I’ve seen his statue in Darjeeling. But we call the mountain ‘Sagarmāthā’, not ‘Everest.’”

“Sorry,” I said. “Have you ever heard of Sir Edmund Hillary?”

“No, Sir,” she said as innocently as any Westerner who’s forgotten Tenzing Norgay, Hillary’s Sherpa guide and porter.

“Have you ever climbed Sagarmāthā?” I asked jokingly.

“Why should I?” she asked. “It’s much easier to walk around it through the valleys. Mountain climbing has brought a lot of money to Nepal, but my parents wonder what draws so many to risk their lives.”

I said I understood her parents’ failure to understand.

I wasn’t always so wise, however. As a boy of about twelve, when my military father was in Korea, I had a “fort” beside a 50-foot white oak at the top of the hill behind our rural home. Hearing the rumble of a thunder storm one afternoon, I decided to receive this visitor the best way I knew: with outstretched arms, for the storm was shaping up as welcome relief to the heat and humidity of August. Menacing clouds sent hail-heavy winds which dropped the temperature 40 degrees in a matter of minutes. Best of all, Mother was shopping at the Ft. Benning commissary, and she had my two sisters with her, so I was free of all restraints, including reason. As the wind swirled and lightning stabbed the trees around me, I climbed as high as I dared and rode that oak like a horsefly on a horse’s ass.

I was telling this story at the supper table one night when my German wife, Ingrid, told me and our two children about the time she and her girlfriend had crossed the Stieger Teich as the ice was beginning to fragment late one March. Earlier that day, some boys, trying to squeeze one more day of skating from the pond, had fallen in, but they were close enough to the margins that they could reach some low branches and pull themselves to safety. As darkness was falling, Ingrid, 13 at the time, decided that she didn’t have time to walk 200 meters around the pond to reach home; she was going 50 meters straight across. And so, like Lillian Gish’s rescuer in Way Down East, Ingrid hopped, stepped, and jumped across the floes to the other side. The only difference being that Lillian’s lover used plywood rafts while Ingrid crossed on ice.

Our son Shane was a junior in college when he heard these two stories, and he told us later it was then that he decided to do something reckless if it killed him. It nearly did. During the summer of 1986, on a trip to East Germany with about 15 of his Clemson classmates, he decided the time was ripe. After a few beers with friends, he excused himself and set out alone down a Leipzig avenue festooned with East German gonfalons and flags hung in preparation for a visiting dignitary. After a quick look around, he scrambled up a pole, unhooked his prize, slid back down, and stuffed the flag in his pants as he raced back to the youth hostel. Though his luggage was searched by customs officials on leaving the East, he was lucky again and managed to bring the flag home.

His luck, however, ran out when Ingrid discovered his contraband. We didn’t physically punish him; we just described the bullet he’d dodged. No hyperbole was necessary. I had not forgotten a similar lecture from a lantern-jawed sergeant major before I was stationed on the fringes of the Iron Curtain. And Ingrid had heard horror stories of the East from her father who often worked with the border police. When the blood had drained from Shane’s face, Ingrid thought he’d suffered enough, but I had him read Darkness at Noon.

Actuarial tables show that far more pedestrians die in a crosswalk than jaywalking. Risk takers often cite those tables as justification for the chances they take. Of course, far more people cross city streets legally than illegally, so it stands to reason that more will die in the crosswalks. Moreover, many jaywalkers are doubly cautious because they appreciate the risks involved. As for myself, I appreciate the adrenaline rush I experience dodging moving traffic when the cops are looking the other way, but I will not cross the Talladega track on foot during a race. Nor will I climb anything remotely approaching the heights of Everest (alt. 29,029); my “batteries” get all the recharging they need climbing Whiteside Mountain (alt. 4,931) which I can see from our home on Blue Ridge Drive.

As I told Shane after his East German escapade, let’s say that after a few beers before he was born, I had decided to sprint across the mined strip that once divided the two Germanys. Let’s say I was lucky; the Vopos weren’t looking; the dogs were sleeping, and I avoided all the buried mines. Let’s also say that I made it back to the West in one piece. What then would I have accomplished? Once the adrenalin had worn off, would my life have been any better or richer for that mad dash? Now imagine I’d failed. My widow would have been left without financial support, and our children would have died with the light in my eyes.

Martin Luther thought mountains were part of God’s vengeance on Eve’s descendants. Sir Edmund Hillary was under no such delusion, but when he returned from his ascent of Everest in 1954, perhaps the most profound thing he said was, “We knocked the bastard off.” (Who knew this magnificent peak was illegitimate?) About 20 years later, the journalist Jon Krakauer, returning from climbing the Devil’s Thumb in Alaska, admitted, “It changed almost nothing.” And the novelist Katherine Anne Porter asked herself after a six-hour, solo climb of a rattlesnake-infested cliff in Colorado, “Did it teach me anything? I think not.”

Immanuel Kant, perhaps writing to refute Luther, argued that Alpine cliffs were natural places to experience “the terrifying sublime.” His countryman Friedrich Nietzsche, a century later, thought humans should “build [their] cities on the slopes of Vesuvius.” Did the massive entombments of Pompeii and Herculaneum teach us nothing? Various climbers have argued that mountaineering, especially above 25,000 feet, is a “religious experience,” but so are tithing and singing “Amazing Grace.” Said another, “It’s an aphrodisiac,” but so are the Venus de Milo and Michelangelo’s David. “You can’t win unless you play,” said another mountaineer (sounding more like a shill for the state lottery). And yet another said, “No one can know the fellowship of the rope” without climbing in “the dead zone.” Had this climber never played a team sport with his girlfriend looking on?

Perhaps the strongest argument to climb at extreme heights is what someone called “the possibility of heroism.” But how must the widow and daughter of Rob Hall feel, knowing he led eight men up Everest in 1996 while, 20 years later, Hall and two of his clients remain frozen to the flanks of indifferent rock? The six who survived had paid $65,000 each a for good story to tell their buddies back home. A story’s doubter could always be shown a fingerless hand or toeless foot, but isn’t heroism diminished when the stage has been set for the grand entrance of “Courage”?

To order copies of Skip Eisiminger’s Letters to the Grandchildren (Clemson University Digital Press), click on the book cover below or contact: Center for Electronic and Digital Publishing, Strode Tower, Box 340522, Clemson SC 29634-0522.

4 Responses to Stealing Home with One Foot on Third: Risk