God Wants This Movie Made!

“My journey as a filmmaker began down the insidiously perfidious trou de lapin otherwise known as religion, but I wasn’t going to let it end there.”—David Christopher Loya 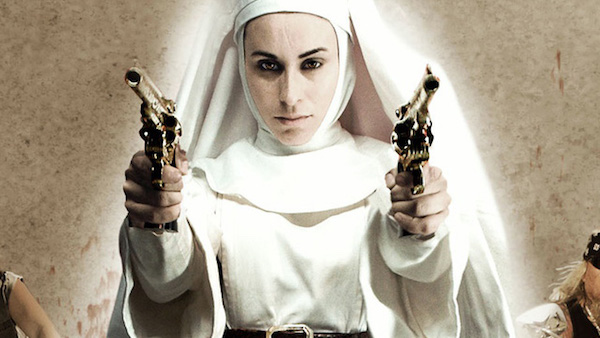 BURBANK California—(Weekly Hubris)—May 2017—“Gentlemen, GOD WANTS THIS MOVIE MADE!” For that added special touch . . . to more emphatically underscore the gravitas of his statement, as though channeling the Almighty Sky-Patriarch, himself, the producer slammed his fist on the conference table with such force I swear I heard bones crack on the shuddering oak. No televangelist would have been so bold.

But this producer was a special kind of crazy.

At that moment, my lifelong companion, ADD, compelled me to turn and look out the floor-to-ceiling, 25th-story window on Sunset Blvd.

It was the summer of 1992, and an absolutely beautiful fucking day in Los Angeles. I could see all the way to the blue waters of Santa Monica.

I had just sat through the best pitch of my life for one of the most vacuous, existentially-devoid concepts for a film I had ever heard, and realized, at that moment, that I had never hated the term “family-friendly” more.

And despite how good the pitch was, frankly I wanted to be anywhere else than where I was at that moment. Within the space of a second, I was envisioning walking on the Santa Monica boardwalk, amidst young, tanned, roller-skating, beach-attired and beautiful . . . women.

My momentary daydream was interrupted by the lunatic loudly and directly addressing me:  “David, it’s no accident that you were called to this meeting. You’re here because God wants you to be a part of His film!”

I thought to myself that I must’ve hit the mystical lotto, and in the presence of a genuine prophet, who just also happened to be a hair-plugged, aging character-actor from a popular 60’s sitcom.

A friend and industry consultant had invited me to this pitch meeting. I was told that the producers of le film vide were looking for someone knowledgeable and skilled in post-production.  At that point in my career, I had developed a reputation as a director who took editing seriously and didn’t fuck around when it came to post.  I never do. My motto has always been, “All production is post-production.”

At the time, I was actively looking for a new film project. I had just completed a two-year gig as the lead segment producer of a nationally syndicated television magazine series. It was airing on ABC, CBS, and NBC network affiliates, as well as larger owned and operated stations in major cities across the US.

In the span of two very long seasons, I was responsible for the completion of some 200 individual productions; and personally wrote, produced, directed, and edited another two dozen segments. The show itself focused on people and organizations making a positive difference in the world.

That series, the production company, and the Burbank studios where I worked were funded by an enigmatic foundation in the Midwest created by an ultra-conservative, zealot Catholic heir to a multinational alcoholic beverage company (ironies never cease). He had thrown literally hundreds of millions of dollars into a deluded vision of creating a “Catholic Hollywood.”

I knew NONE of this when I took the gig. I just knew someone valued my creativity enough to pay for it. Not surprisingly, I was soon judged to be both an irreverent and rebellious “problem director,” and became someone who managed to keep getting himself in trouble with “the management.”

Rather than create segments on defense contractors who assisted church-sponsored anti-poverty programs, I shot stories such as one that focused on the plight of Central American political refugees and the organizations saving them. I also defiantly eschewed accepting certain assignments. I would have rather put pins in my eyes than shoot a puff piece on goofy, hockey-playing priests who held games to raise money for charity.

I instead made it my mission to focus on secular institutions working to promote social justice. The coup de grâce to my tenure occurred when I produced and directed a two-part feature on Amnesty International.

It was edited, in the can, and uplinked to the satellite before the powers that be could stop it from airing.  Apparently, helping refugees and supporting those who stop torture was not something conservative “Catholic Hollywood” felt was part of “God’s agenda.”

Not wanting to fire me, management gave me a different assignment. I was asked to direct a compassionate documentary on the AIDS crisis. The International AIDS Conference happened to be taking place in San Francisco that year. I flew up with two crews for two weeks worth of shooting.

Everything changed when we were “instructed” to film a special rally (sponsored by an evangelical group) the evening of the conference’s second night. A sanctimonious “Christian music artist” popular with the crazed “I’m saved, you’re not” subculture proudly spoke on stage, periodically throwing his head back to emphasize a perfectly ridiculous mullet. He projected an absurd arrogance (not unlike a rooster with a four-hour-long erection) and, in the course of his militant testimony, delivered a punch-line I’ll never forget.

To a mostly LGBT audience this mulletmaned jerk shouted: “I realized that my own pride was just as much a stench in the nostrils of a holy almighty God as your homosexuality ever was!” Understandably, the crowd became hostile upon taking in this intelligence. Some even rushed the stage.

It was no surprise that this cretin needed the protection of armed security guards, who swiftly escorted him out.

The executive producer of the documentary, a shapely, blonde, not-so-secret petite ami of the studio’s general manager, met with me after the incident to inform me that the reason we’d been asked to shoot this particular rally was because the people funding the documentary were—wait for it—The Heritage Foundation.  The entire time, I had mistakenly assumed that “my” AIDS documentary was being funded by the studio I worked for.

Two words rose in my brain: “Oh, fuck!” I felt sick to my stomach. I’d been recruited unwittingly to create a “hit piece” against the gay community; to bolster a narrative that was diametrically opposed to everything I stood for; my skills leveraged to serve one of the most fascist, ideologically conservative groups in the country; one that was also powerfully aligned with the Religious Right. The EP then proceeded to tell me what a great job I was doing, and how much her new overlords liked the footage they had seen thus far. And they were, further, contacting a “select group” of experts that they wanted me to feature in the film.

As the foundation gathered its experts, over the next two days I was completely free to shoot whatever I wanted.  I knew, needless to say, that this arrangement of me as a director on a project for a fascist think-tank was not going to work, and I wasn’t going to allow it to work.  My days were numbered. So, I decided to shoot anything and everything that would constitute the perfect cinematic poison pill to the Heritage Foundation’s fucked-up mandate.

First, I decided to find my own experts. And I did.

My crew and I then shot b-roll of every nook and cranny of Castro Street, San Francisco’s  notoriously salacious gay promenade. Our cameras captured anything and everything related to hardcore gay sexual culture, from pornographic posters, to S&M leather couture and battery-operated devices that exceeded one’s wildest imaginings.

See, in my meeting with the executive producer, I had also been politely told that I  needn’t worry about editing my production: They had a full staff of multiple church volunteers who would be viewing and logging every frame of footage, in obvious preparation for a final edit which would take place at a secret facility somewhere in Virginia.

Word got out as to what I was shooting, and I was summarily removed from the project. I absolutely expected this to happen and I had no regrets whatsoever.

Shortly after, I ceased working, entirely, for the quasi-Catholic operation. By that point, I deplored and despised everything about religious media, and the culture behind it . . .

. . . which brings me back to that meeting on the 25th floor of the Sunset Blvd. office tower, months later.

The producer went on about creating “values-oriented” media and how he represented a new movement of “artists” committed to taking Hollywood back from the devil; using their talents to create “edifying, God-centric media.”

Everything he passionately droned on about during the second part of his pitch I had heard before. It was not a new theme among those who consider themselves part of one of the most oxymoronic groups I’ve encountered in my career: “Christian filmmakers.”

And I knew I wanted nothing to do with him, his associates, or his movie.  My journey as a filmmaker began down that insidiously perfidious trou de lapin otherwise known as religion, but I wasn’t going to let it end there.

I don’t remember answering him, but I do remember politely declining his offer.

I was alone as I took the elevator to the parking garage, smiling and laughing to myself all the way down.  I then drove straight to Santa Monica. As I had imagined it all, there were California’s sun-kissed boardwalk goddesses, and even a churro with my name on it on the pier.

To the producer’s credit, the film about a talking farm animal was in fact actually made by the God-fearing, indie production company, and even picked up for distribution.

And, deservedly, it bombed. The film was absolute drek.

At the same time, another movie with a similar theme was produced by Universal. It killed at the box office, was nominated for seven Oscars, and won an Academy Award for Best Visual Effects.

That film was “Babe.”

David Christopher Loya is an award-winning filmmaker/director/writer who has created hundreds of productions for national cable and broadcast networks, Fortune 500 companies, public and private Ivy League universities, international NGOs, and charitable organizations. His unique "Conscious Filmmaker"® approach to production has been used successfully by educational institutions and prominent non-profits to raise over $1 billion in donated revenues. Loya's body of work has been recognized by 20 national Telly Awards as well as honors at the New York Film Festival and the Banff World Television Festival. A Los Angeles native, Loya says he grew up in poverty, in a violent and gang-infested, inner-city housing project, where his strong mother and runaway imagination protected him from damage and a hardening of the human heart. "Twelve years a slave" to the nuns, a full academic scholarship to UCLA comprised the lifeboat that transported him to secular freedom. Ironically, despite his abandonment of religious constructs, due to stubborn faith-tradition hold-overs Loya says that he views filmmaking as a vocation analogous to a priesthood-sans-celibacy. An accredited member of the Festival de Cannes, Marché du Film, Loya has traveled the world, forging alliances with filmmakers, distributors, sales agents, private equity investors, and producers, as he continues in active development with multiple feature film and television projects. (For a list of Loya's industry-recognized credits click here: http://www.imdb.com/name/nm0092526/.)
View all posts by David Christopher Loya →
This entry was posted in Uncategorized. Bookmark the permalink. Follow any comments here with the RSS feed for this post. Post a comment or leave a trackback: Trackback URL.

One Response to God Wants This Movie Made!