“My sole original thought this spring is this: what’s with the god-awful pinstripe suits now being worn by every pol, pundit, and latter-day-Pétain in Washington, DC? I long for the mavens of ‘Queer Eye for The Straight Guy’ to enlighten me. Is there some deep structure to these garish suits? These crisp, expensive white shirts? These horrific, and horrifically expensive, silk ties?”—Elizabeth Boleman-Herring 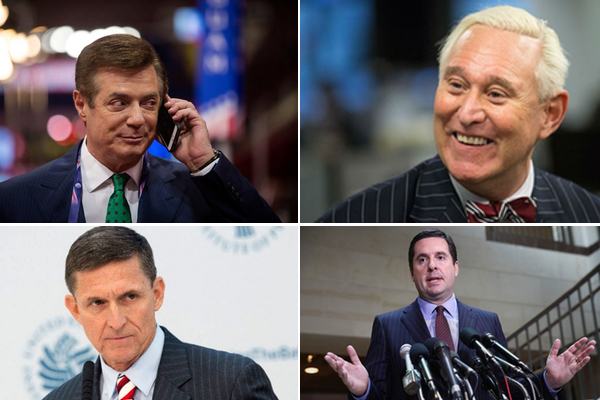 “Picking out a group of your neighbors and citizens and associating them with a worldwide threat, that’s the 1930s. And what we have to remember about the 1930s, we think of Hitler and Stalin as supervillains but they’re not—they could only come to power with some form of consent.”—Dr. Timothy Snyder, author of On Tyranny: Twenty Lessons From The 20th Century

“When a terrorist attack comes, you will not necessarily know who did it. What you can know is that certain kinds of leaders will use that to suspend your rights. During your fear and your grief you have to mobilize and protest for your own rights because the Reichstag fire is the oldest trick in the Hitlerian book. You cannot let that trick be played.”—Dr. Timothy Snyder

PETIT TRIANON Florida—(Weekly Hubris)—April 2017—My sole original thought this spring is this: what’s with the god-awful pinstripe suits now being worn by every pol, pundit, and latter-day-Pétain in Washington, DC?

I long for the mavens of “Queer Eye for The Straight Guy” to enlighten me. Is there some deep structure to these garish suits? These crisp, expensive white shirts? These horrific, and horrifically expensive, silk ties?

Everyone on TV looks like a latter-day London banker just now, and perhaps that’s the point: pinstripes would be a corporation’s uniform of choice, and now people are, arguably, indistinguishable from corporations in America.

Whatever the significance of this sartorial trend, I seem to be the first to notice it.

I do not pretend I am the first to note that Donald Q-for-Quisling Trump is Putin’s patsy, nor that the V-for-Vichy Republicans are, as well, by one degree of separation, Putin’s collaborators (though, in President Steve Bannon’s case, the cæsura between Russia’s dictator and the leader of the no-longer-free-world may be simply an optical illusion).

Nor can I claim dibs on noting—early on—the resemblance of the current White House gang to those in power in The Hunger Games; or to the heads of family in Game of Thrones. Heads that rest uneasy on Republican shoulders. Heaven knows, heads have already rolled at the foot of Putin and Bannon’s iron throne: those of Roger Stone, Paul Manafort, Mike Flynn, and Carter Page, with more soon to come.

None of what’s happening in America is particularly subtle just now, though Donald Q’s base—the verrrry poorly educated and only nominally conscious—will never have the grey matter nor attention span required to come to grips with what’s just beneath their noses.

The rest of us, however, those with three-digit IQs able still to unplug from screens a few hours a day and take the future of the Commonwealth, not to mention the planet, to heart, should remain in the streets, at Town Halls, and on the phone (screaming down it to our nominal “representatives”) for at least an hour a day.

Not too much to ask, I opine.

I would also plead with those of you who are paying attention to what Putin is up to in “the West,” in general, to expect what Dr. Timothy Snyder predicts will be yet another Reichstag Fire event, this time in or affecting the United States.

For those of you under the age of 70 and/or who skipped History after high school, here are the salient points:

“The Reichstag fire was an arson attack on the Reichstag building (German parliament) in Berlin on 27 February 1933. The Nazis stated that Marinus van der Lubbe, a young Dutch council communist, had been caught at the scene of the fire, and he was arrested for the crime. Van der Lubbe was an unemployed bricklayer who had recently arrived in Germany. The Nazis stated that van der Lubbe had declared that he had started the fire. Van der Lubbe was tried and sentenced to death. The fire was used as evidence by the Nazi Party that communists were plotting against the German government. The event is seen as pivotal in the establishment of Nazi Germany.

“Adolf Hitler, who had been sworn in as Chancellor of Germany on 30 January, urged President Paul von Hindenburg to pass an emergency decree to suspend civil liberties and pursue a ‘ruthless confrontation’ with the Communist Party of Germany. After passing the decree, the government instituted mass arrests of communists, including all of the Communist Party parliamentary delegates. With their bitter rival communists gone and their seats empty, the Nazi Party went from being a plurality party to the majority, thus enabling Hitler to consolidate his power.

“The responsibility for the Reichstag fire remains an ongoing topic of debate and research. Historians disagree as to whether van der Lubbe acted alone, as he said, to protest the condition of the German working class. The Nazis accused the Comintern of the act. Some historians endorse the theory, proposed by the Communist Party, that the arson was planned and ordered by the Nazis as a false flag operation.”

What Dr. Timothy Snyder, author of On Tyranny: Twenty Lessons From The 20th Century, cautions citizens of the West about now is Trumpworld’s creation of a Reichstag Fire for our times, a diversionary emergency during which Bannon et al move to suspend our rights. Any 9/11-type event would do; any “attack” on us by North Korea; any revisitation of Plague; any “emergency” at all.

The problem is, we’ve displayed such “failures of imagination” in the US as to what’s coming next (I could not have predicted 9/11, nor, really, the rise of Bannon and Trump, could you?) that we need to be creatively vigilant on a scale not required heretofore in modern “democracies.” The bait-and-switch con-men in power may well rob us blind while we’re (theoretically) paying close attention to their last con. What will they try on us next? What fresh unknowable horror?

Frankly, I could not even have predicted  . . . the return of pinstripes.

3) “The Quisling Establishment: The Republican Party establishment has become one of Donald Trump’s deluded enablers,” PoliticoMagazine, By Rich Lowry, January 27, 2016.

7) “On Tyranny: Twenty Lessons from the Twentieth Century by Timothy Snyder, Review,” The Guardian, By Tim Adams, March 20, 2017.

One Response to Quislings in Pinstripes