Gone To Beach, Rabbit On Back Burner

“They came for a lightning visit, four nights and three days, all the way from Paris. We had basked in their hospitality so many times it was embarrassing—in New York, in and near Paris, and even in a villa au bord de la mer near Marseille, where they were doyens of an artists’ colony. Though I might have cooked them part of a meal, they had never stayed under our roof.” Diana Farr Louis

ANDROS Greece—(Weekly Hubris)—10/15/2012—They came for a lightning visit, four nights and three days, all the way from Paris. We had basked in their hospitality so many times it was embarrassing—in New York, in and near Paris, and even in a villa au bord de la mer near Marseille, where they were doyens of an artists’ colony. Though I might have cooked them part of a meal, they had never stayed under our roof.

But, as the day of their arrival on the 7:30 ferry drew near, I began to have qualms. Would they be appalled to find themselves in the outback, at its most stark and bare, after five months without rain? Would they be bothered that our house is internet free? That our neighbors resemble Barbara Kingsolver’s “Beans of Freeport, Maine,” with their abandoned vans, bursting bags of wool, and rusted fences cluttering the approach to our house? 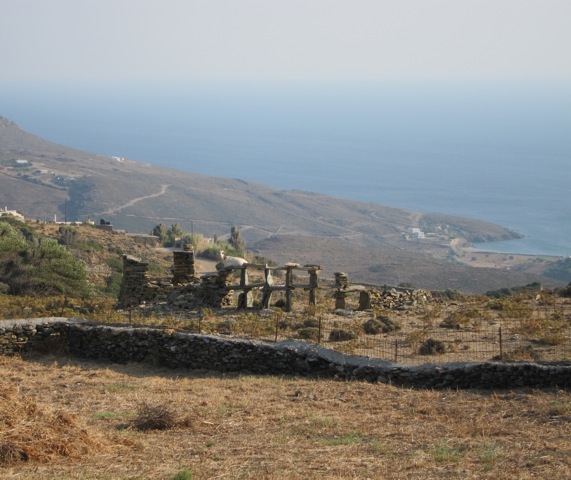 The view from our land after a dry summer.

At least they would arrive in the dark.

I should not have worried. C and L appreciate the basics: good food, drinkable wine, cozy conversation and, mostly, friendship. So I prepared my favorite eggplant dish (smothered in garlic, see “Sea Urchin Season,”), made a spicy hamburger mix, and prayed the wind would drop so we could sit outside.

Round midnight, as we were saying good-night and sweet dreams, C looked at me and said, in perfect Greek, “Mou arései to spíti sou.” (“I like your house.”).

I couldn’t believe my ears. She’d picked up that expression way back in 1968, when we shared a house with our small kids on the island of Spetses. How many chances could she have had to use it since then? And yet she had slotted it into some mental archive, waiting for this moment.

We’d known each other vaguely at college, become friends when we both lived in Paris after graduation, and cemented the bond for life with that summer in Spetses.

We were doing the typical European or at least Southern European thing: taking our children off to the seaside while our husbands stayed behind, poor dears, to work in the city (NYC, in my case; Paris, in C’s). The house came with a courtyard, a chicken coop, and a large, joyful woman named Voula, who helped with the cooking and laundry (there were no Pampers back then). My Greek family adopted C as warmly as they had me, and we were included in most of their social gatherings—caïque outings to mainland beaches, jasmine-scented parties on my sister-in-law’s verandah, taverna evenings—though we were quite happy on our own.

Much of that summer has faded into a pleasant blur but for a few salient details. Like C’s older boy (at six) learning how to fish and my mother-in-law, Dodo, telling him that the best part of any fish was the cheeks; climbing into a roadside fig tree and being caught sticky-handed; pushing two-year-olds to the town beach with Greek mothers who chased their kids with spoons of mush; Voula taking a pan of stuffed tomatoes or pastítsio to the bakery for lack of an oven; filching eggs from the coop and not giving them to our children. 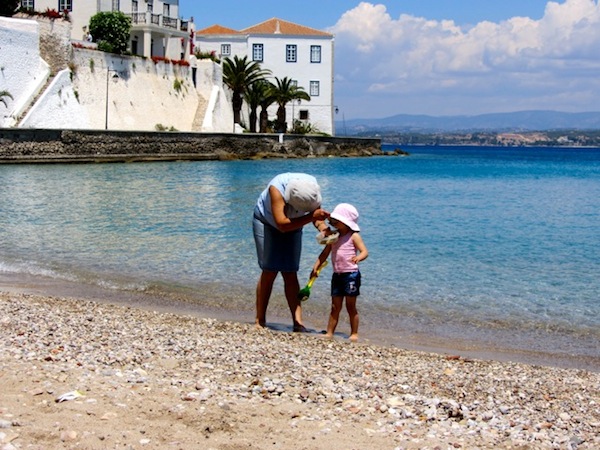 But one evening remains burned into our joint memory. For some reason we never fathomed, we were invited to a sit-down dinner at the home of La Baronne, the stylish but snooty Greek widow/divorcée(?) of a titled Austrian nobleman. I’d only been there once before, where she’d introduced me to an English molecular biologist.

“You mean DNA, RNA, that sort of thing?” I’d said brightly. “I know all about that from my biology course at Harvard.” The tall, rosy-cheeked man smiled benignly and we started to chat. The next person to enter the room, however, addressed him as (Sir) Francis Crick. I am still mortified.

But for this more formal occasion two tables had been set up in La Baronne’s courtyard, one for ten and the other for three. Perhaps C and I were placed at the smaller because we couldn’t speak Greek, or because we were in our mid 20s and therefore of no interest (or too much to the few men present). We sat across from each other in bewildered isolation. Our dinner companion was fashionably late.

When he did arrive, a 60-year-old gentleman with an eye patch and considerable charm, he seemed pleased but equally confused by the arrangement.

Somehow, 40 years and a couple of husbands later, we always come back to the Spetses stories no matter where and when we meet.

But my hope is that our three days together on Andros have added to our larder of shared memories. What will C remember? 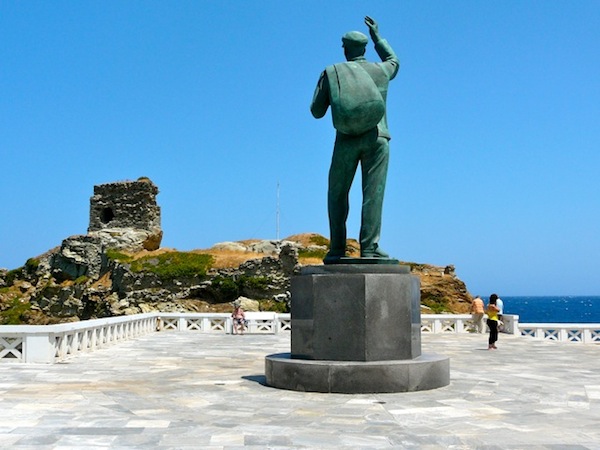 The Unknown Sailor would not be out of place in Red Square.

Waking up to our dusty olive trees flanking a view down a valley that ends at a beach and the misty Aegean. Burrowing into the bags of vegetables at the back of a farmer’s pick-up on the port—not quite as picturesque as a French market. Driving to Hora past thorn bushes and dry stone walls to the “shipowners’ side” of the island, with its cypress forests and Venetian mansions. A walk through the deserted old town to the Soviet-style Monument to the Unknown Sailor. Food boutiques stocked with jars of caper leaves and divine Andros honey. A couple of good meals out and even more memorable ones at home. Spring water almost sweeter than wine. Delicious swims at deserted beaches, including one at twilight with black goats silhouetted among the crags on the ridge of the cliff above us.

Perhaps most of all she’ll remember the preparations for our Sunday lunch party. The guys had gone to town for the paper and the net café. Our guests wouldn’t be coming until 2. And there was no way we were going to miss a swim—this October, the water has been warmer than in August—and so I scribbled a note for our spouses: “Gone to beach. Rabbit on back burner, potatoes in oven. If you hear the timer bell ring, turn it back on.”

And I’ll remember how wonderful it was to have friends who cared enough to come all the way here for a long weekend and who stay close and lovable even though we’re now separated by two continents and ten time zones.

This is the forgiving recipe for that rabbit, one of the easiest in my Feasting and Fasting in Crete. Don’t be tempted to fiddle with this dish. I was, and tried adding oregano and garlic, but these simple instructions could not be improved upon.

Wash the rabbit pieces and marinate them overnight in the lemon juice and salt. Turn them over half-way through. Dry the meat (discard the marinade), heat the oil in a large non-stick skillet, and brown the rabbit pieces. Don’t crowd the pan; do it in stages if necessary and don’t let them burn. When browned on all sides, add a little water (about 60 ml or 1/4 cup) and simmer the rabbit, covered, until only the oil remains and the meat is tender.

Our rabbit simmered over very low heat for at least 2 hours, until the meat was literally falling off the bone/melt in the mouth and unutterably succulent. It was fairly large and served 7, along with slow-roasted potatoes that had a few unpeeled garlic cloves thrown in with them, a tomato, onion, and pepper salad; taramosaláta to start with and a lemon cake for dessert.

6 Responses to Gone To Beach, Rabbit On Back Burner