“As a result of Grey’s actions, France, confident of Britain’s backing, encouraged Russia to become more militaristic and uncompromising in its attitude to both Germany and its satellite, Austria-Hungary. The net result was to force Britain into a war she probably could have avoided—a war that, given Woodrow Wilson’s professed Anglophilism, eventually dragged in the USA.” Sanford Rose 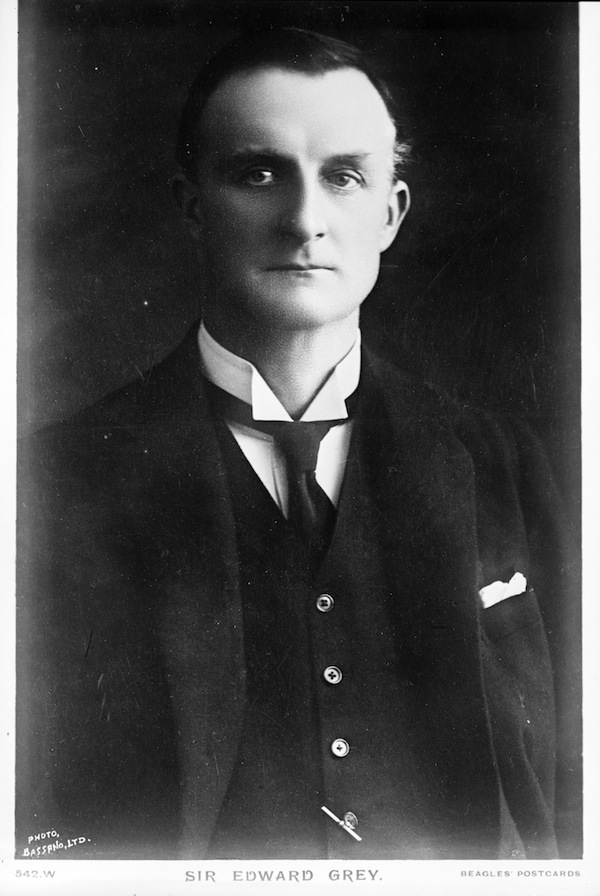 In that piece, I noted, somewhat portentously, that we live in the shadow of Sir Edward Grey, who was Britain’s foreign minister at the start of World War I. The argument is that Grey’s misfeasances or non-feasances set in train a series of catastrophic events that still make newspaper headlines a century later.

Grey had pursued a Germanophobic foreign policy for eight years prior to the start of the war in 1914. Only he never told his governmental colleagues or the British people exactly what he was doing and what were its consequences. He never told them, for example, that he had virtually obligated his government to send troops to help the French in the event of war. Had he done so, they would have been horrified and very likely turned him and his party out of office.

As a result of Grey’s actions, France, confident of Britain’s backing, encouraged Russia to become more militaristic and uncompromising in its attitude to both Germany and its satellite, Austria-Hungary. The net result was to force Britain into a war she probably could have avoided—a war that, given Woodrow Wilson’s professed Anglophilism, eventually dragged in the USA.

Yet, despite the blustering of Kaiser Bill, there was precious little that Germany had done in the 1906-1914 period that threatened Britain’s vital interests or created a conflict that could not be, and was not in fact during that period, easily resolved.

Unlike the situation 25 years later, Germany had not dismembered one nation, nor stood on the verge of extirpating yet another (Czechoslovakia and Poland—nations that of course were born after and as a result of World War I). German expansion in the prewar period had been confined to colonial areas, where its aggressiveness was no greater than that of the other imperialists—France, Russia or Britain itself.

To be sure, some German historians of the “mea culpa” school have unearthed a document that purports to show that German war aims in World War I were quite similar to the Hitlerian aims of 25 years later. However, that document was composed after the war began and reflects the bitterness engendered by the growing cataclysm. It is less than decisive proof of a continuity of aggressive intentions.

The evidence suggests that Grey’s intense Germanophobia may have had its origins in the rough treatment he suffered at the hands of a German diplomat some 20 years earlier. It is hard to know for sure because Grey himself was as taciturn as he was secretive.

He was also terribly mediocre. Patently unsuited for the job of foreign minister (he had no languages, manifested little knowledge of the affairs of other countries and rarely, if ever, went abroad), his advancement was probably the result of his aristocratic lineage and the fact that he was, as one writer has suggested, “a stick that could be used by others.”

So in one key respect there is a connection with the later Hitlerian period. Grey was a polite, kindly and dutiful man. But his unthinking, almost reflexive, actions, like those of Eichmann, resulted in the senseless slaughter of millions. Like Eichmann, he personifies what Hannah Arendt would later call “The Banality of Evil.”