“Physicists tell us that, in fact, no real touch is possible. Thus, when lips meet, they say, two electric fields are interacting, electrons are grazing electrons. Perhaps so, but if a pretty server touches my hand, the size of her gratuity rises in direct proportion to the warmth of her interaction.”—Skip Eisiminger 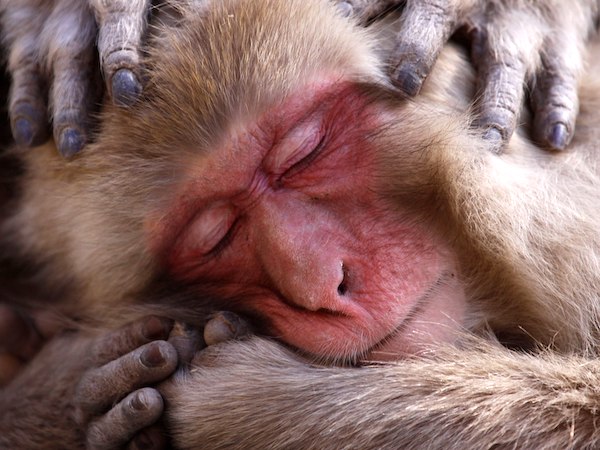 I. “It’s not icky. It’s mud.”—Cartoon boy to girl his age by Barbara Smaller

CLEMSON South Carolina—(Weekly Hubris)—1 June 2022—Before I ever touched the woman I married, I knew she looked good, sounded good, and smelled good. When she finally gave me a taste, I knew she felt good as well. Her touch, and what I felt, was the best sense of all. For years, she bowed my spine like a cello between her knees. Today we call it “cribbage,” and though the bowing has slowed, the 60-year-old melody is still sweet.

Touch led naturally to children, and when our first child was born, he liked nothing more than to be rubbed from neck to toe with baby oil after a bath. Smiling, he would stretch his small body to make each oiled stroke as long and pleasurable as possible. My wife loved this routine more than I did, but she had a nine-month advantage in developing what the Japanese call “skinship” and the Australians call “marsupial care.” If she had not returned to the bank where she worked, she would have worn this child like a !Kung mother gathering produce on the Kalahari, and I would have loved her for her devotion and envied her for the bond she’d developed.

Today, if I were blind, single, and wrote erotica for a living, I’d attach a slippery nipple to each key on my keyboard. I probably wouldn’t get a lot written, but you’d find me smiling. 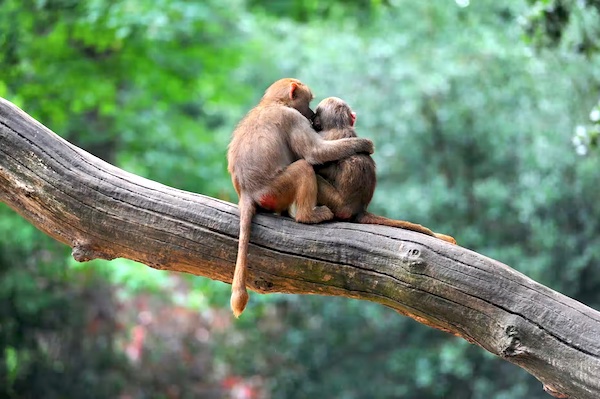 II. The British philosophers Thomas Hobbes and John Locke thought nothing entered the human mind that wasn’t first in our senses. If they are correct in this assumption, is pi in our senses or in the Oversoul? Reach as I might, I can’t quite grasp the immensity of pi.—The Wordspinner

Though many authorities agree that a frisson, a quivering mix of fear and pleasure, is our first sensation and the last we are aware of us, Aristotle thought touch was “servile and brutish” because we share it with animals. Think puppies and kittens and how responsive they are to any touch they can finagle.

As far as I can tell from a cursory examination of the historical evidence, touch remained underappreciated in Europe until the Italian Renaissance when one finds Leonardo da Vinci complaining, “Man touches without feeling.” At the same time in the Roman church, there was a lot of touching of prepubescent boys that was unwanted, and it has only been recently that the Vatican has limited it, declaring wrestling, tickling, and kissing a child off limits. Which in some ways is a shame because my wife and I wrestled, tickled, and kissed our children at every opportunity they offered us. We were also guilty of halla-hooping them along the sidewalk and giving zerberts, bilabial trills on naked bellies, but I understand why the church had to place limits on their single priests who were forbidden to marry or touch each other, thereby disavowing the pressure-relief valve nature gave us.

Today, psychologists urge parents to touch their children in appropriate ways to establish the bond that tactile experience promotes. Since many are slow to learn, marriage counsellors find themselves repeating that message to their touch-starved clients. To spread the good word about touch, formal haptic studies and the open discussion of touch from the bedroom to the boardroom has mushroomed. In addition to dozens of academic studies, there are currently one ballet, two books, four films, four music groups, 14 albums, and 15 songs all titled “Touch.”

I wish I knew what led Margaret Atwood to write, “[Touch] is the first language and the last, and it always tells the truth.” I question her concluding clause because research has shown that the hands, like our eyes and ears, can easily be fooled. To illustrate this point, subjects were asked to place their left hand in hot water and the right in ice water. After a minute of immersion, subjects were asked to place both hands in a third tub of room-temperature water. The result was the cold hand suddenly felt warm, and the warm hand felt cold.

In another demonstration called the “rubber-hand illusion,” a plywood shield was slipped over one shoulder of a seated subject. Then a rubber hand with a sleeve running behind the shield was placed on a table in front of the subject. Then both visible hands, one real, the other rubber, were stroked for thirty seconds. To the subject’s surprise, when the rubber hand was struck with a hammer, he/she felt pain. Had the stroking and hammering told the truth? I don’t think so. We’ve known for centuries that trusting your senses is not always the best way to know reality, for they can all be fooled.

Physicists tell us that, in fact, no real touch is possible. Thus, when lips meet, they say, two electric fields are interacting, electrons are grazing electrons. Perhaps so, but if a pretty server touches my hand, the size of her gratuity rises in direct proportion to the warmth of her interaction. 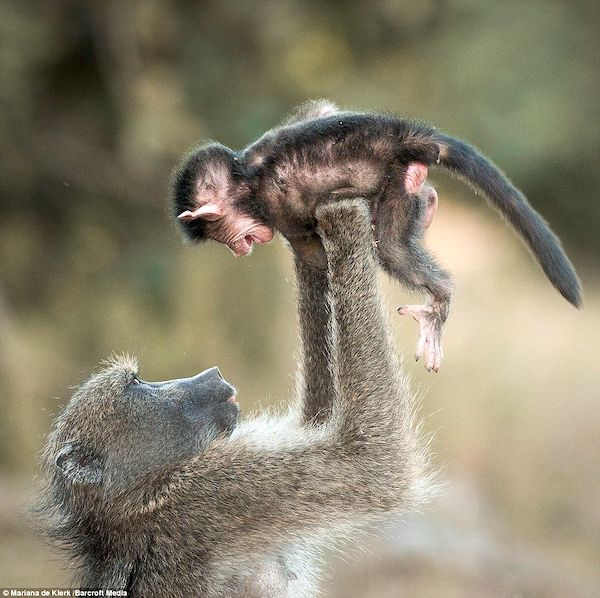 III. “One eye sees, the other feels.”—Paul Klee

I alluded to the growing research on touch above, and here are some of the findings: 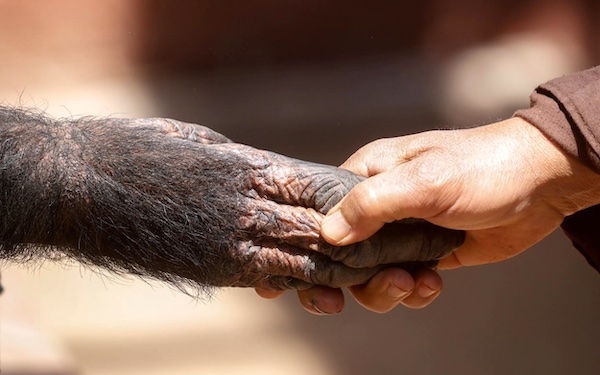 IV. “The closest I get to a hug these days is static cling.”—Cosmo Fishhawk in Shoe

Afraid of spoiling her child like so many in the 19th century, Charlotte Perkins Gilman’s mother never held her daughter unless the girl was sleeping. When she realized this, she began taking one of her mother’s sewing needles to bed, feigning sleep, and secretly using the needle to keep herself awake while her mother held and rocked her.

A hundred and sixty years after Perkins’ birth, while watching Gustavo Dudamel conduct the Vienna Philharmonic, my wife and I noticed that when it came time to direct Samuel Barber’s Adagio for Strings, a lovely example of emotion made audible, he put down his baton and conducted with his bare hands. Small as it was, the baton stood between this Venezuelan conductor and the music.

Though Americans have made great progress, we live at a time when some political conservatives reject swaddling their babies in the name of freedom, when an inadvertent touch may be read as a sexual advance, and eye contact may be read as an unwanted touch. Fortunately, we live when it is acceptable to kiss and hug our children (it wasn’t when my father was born in 1917), but while !Kung mothers wear their babies for 90 percent of the first year, ours are “worn” only 15 percent of that time. It’s difficult to measure what we are missing. Can a lamb’s wool blanket replace what western mothers can no longer provide?

The only physical contact some Covid patients received during the pandemic was a rubber glove filled with warm water, but too many Americans are still like our museums, with “Don’t touch” signs dangling from our necks. There are a few “Please-touch” children’s museums today and there are professional “Snuggle buddies” to hire, but we are light years behind our equatorial neighbors. In one study published in 1996 by Sidney Jourard, Floridians, chatting in a Gainesville coffee shop, touched twice an hour while their Puerto Rican counterparts touched 180 times an hour. The British counterparts did not touch at all.

Dr. Sterling (“Skip”) Eisiminger was born in Washington DC in 1941. The son of an Army officer, he traveled widely but often reluctantly with his family in the United States and Europe. After finishing a master’s degree at Auburn and taking a job at Clemson University in 1968, he promised himself that he would put down some deep roots. These roots now reach back through fifty years of Carolina clay. In 1974, Eisiminger received a Ph.D. from the University of South Carolina, where poet James Dickey “guided” his creative dissertation. His publications include Non-Prescription Medicine (poems), The Pleasures of Language: From Acropox to Word Clay (essays), Omi and the Christmas Candles (a children’s book), and Wordspinner (word games). He is married to the former Ingrid (“Omi”) Barmwater, a native of Germany, and is the proud father of a son, Shane, a daughter, Anja, and grandfather to four grandchildren, Edgar, Sterling, Spencer, and Lena.
View all posts by Sterling Eisiminger →
This entry was posted in Uncategorized. Bookmark the permalink. Follow any comments here with the RSS feed for this post. Both comments and trackbacks are currently closed.