“The slow expansion of the crack in the ancient Rift Valley will tear away the Afar desert and the horn of Africa from the rest of the continent. That alone doesn’t make an ocean but it gives us pause as we navigate the traffic of our lives, trying to imagine right behind our house a massive chasm more than 50 feet deep . . . .”—Becky Dennison Sakellariou 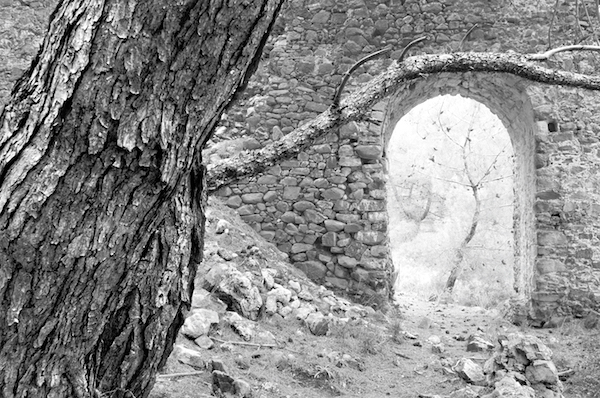 The remains of the Turkish aqueduct, near Mytilini, Lesvos. (Photo: From the portfolio, “Monuments, by Panos + Mary/ Panos Charalampidis and Mary Chairetaki.”)

ATHENS Greece & New Hampshire—(Weekly Hubris)—1 July 2021—Elizabeth Boleman-Herring: Poet Becky Sakellariou writes: “I have lived most of my adult life in Greece. I start with this statement because of the unexpectedly vast impact and weight this fact has had on my world views, how I ‘translate’ and survive in my surroundings, and, naturally, what—and even how—I write.

“The cultural and physical landscapes of New England, where I was born and raised, and those of the Greek/Mediterranean where I have lived for so long, mingle, merge, and even coalesce in intriguing and often inexplicable ways in my poetry. I might begin with a winter New Hampshire image, and a thread of Greece will attach itself to the image and pull it in another, surprising direction.

“I always trust these interventions, these visits; they inevitably create rich narrative tapestries. I believe they are also a large part of why I write, not only what I write. In the past few years, world political events have also empowered my writing, infusing it with tension, contradiction, and sometimes even mystery. Most recently, my writing has centered around the refugee situation in Europe, specifically Turkey and Greece, and my own experiences in the camps and with the immigrants themselves.

“I have worked in teaching, writing, editing and counseling; I have also published seven books of poetry, one of which, The Possibility of Red/Η Πιθανότητα του Κόκκινο, published by Hobblebush Books in 2014, is a bi-lingual edition in English and Greek (translated by Irene Theotokatou and Maria Laina). I have won a number of poetry and chapbook contests and prizes and have been nominated for the Pushcart Poetry Anthology twice; my book is Gathering the Soft, an art/poetry book that circles around the subject of cancer, was put out in 2016 by Passager Books.”

Writing since she was seven, Sakellariou has, over the past two decades, published poetry in a wide variety of journals, including “Common Ground Review,” “White Pelican Review,” “Dos Passos Review,” “Beloit Poetry Journal,” and “Passager.” Her chapbook, The Importance of Bone, won first place in the Blue Light Press Contest in 2005 and was published that year. Her first full-length book, Earth Listening, was chosen by Hobblebush Books of Brookline, New Hampshire in 2010 as the second in the Granite State Poetry Series. Her third book, What Shall I Cry?, was published by Finishing Line Press in 2013. In 2014, Hobblebush Books published The Possibility of Red. In 2017, Blue Light Press released No Foothold in This Geography. In 2018, Kelsay Books issued Undressing the Earth.

The following four poems are from Sakellariou’s collection titled until the tree grows, towering.

Editor’s Note: The black and white photograph illustrating this column derives from a portfolio of images of Lesvos titled “Monuments: 2009-2010,” created by the Greek artist/duo Panos + Mary. See more of this work here. About “Monuments,” they write: “The following images are our contribution to a project about the Byzantine, Paleochristian, and Ottoman monuments on the island of Lesvos.  The project was an idea and was assisted by the Ephorate of Byzantine Antiquities of Lesvos.”

4 Responses to Her Landscapes: New Poems