Hollywood/Bollywood . . . It’s Only a Shower

“My shower ritual continued to evolve over the years,  one thing added on another until it  required a contoured, long-handled back scrubber, no-skid germ-resistant shower mats, scalp and hair rejuvenating gels, foot scrubbers, three gradations of loofah sponges, shampoo and rinse trays, soap dispensers, a custom shower head, and a vast array of emollients of the highest purity, having been proven (relatively) safe after several hundred toxicity tests on the eyes of formerly sharp-sighted eagles, falcons, and owls.”—Ross Konikoff 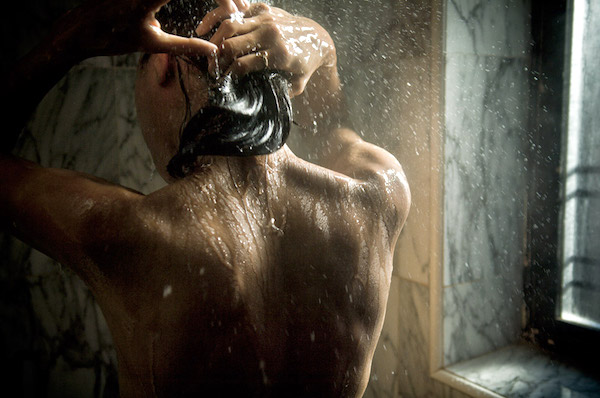 MANHATTAN New York—(Weekly Hubris)—February 2019—You don’t really know what a person looks like until you see them step out of a steamy, hot shower, no lipstick, no eye liner, no hair style, no towel, just clean, vibrant skin, all facial muscles relaxed and at peace with each other. Only then do you see the real person, unfiltered. I learned to appreciate this truth some 40 years ago while chasing a girl to a small town in India and spending two weeks there. I’ll save the sad emotional details of that escapade for another time but, to put it in a cowry shell: she was on a spiritual quest, and I was on a girl quest.

The living conditions were communal, all of us living and loving in a large isolated house in the desert, with no delineated rooms, simply a large L-shaped space. There were 24 of us, mostly young American couples, all watched over by a sweet, elderly Indian woman who continually teased us with her “holy cow” and “sacred hamburger” jokes, while her teenaged houseboy remained mute, obedient, and omnipresent. The L section contained the toilet, sink, and shower area, separated from the larger area by a thin white sheet of cotton hung from the ceiling but inexplicably stopping about four feet short of the ground. This curtain was in constant motion due to the open windows and the fierce desert wind blowing through the house so, as a means of privacy, it was ineffective, leaving anyone in that room completely exposed 95 percent of the time. As to the toilet, no matter where the curtain was, it was always show time.  It was one thousand degrees Fahrenheit at all times and there was no air conditioning. The only “relief” came from the open windows as the hot wind blew sand everywhere. By the end of the two weeks, everyone had seen everyone else on the toilet, at the sink, and having his or her shower at least ten times.  Fortunately, the brutal heat seemed to dull everyone’s inhibitions and passions quickly enough so that, after the initial humiliation, all signs of self-consciousness evaporated and complete surrender prevailed.

It was the shower routine, however, that stayed with me long after my return home. In order to shower, we disrobed and stood on a tiled floor area in the center of the room while the teen-aged houseboy brought in a cauldron of hot water and a large ladle. His job was to stand near you and ladle hot water on specific parts of your body. You were then to soap that particular area, following which he would ladle on more water, rinsing off the soap. This very deliberate process took place in full view of the 23 others in the room who, out of respect, did their best to pretend not to be watching someone take a shower. (To be perfectly honest, it beat the hell out of Netflix.) At the conclusion of this spectacle, the boy would hand over a small towel with which to pat yourself dry before pulling your sweaty clothes back on.

After returning to the States, that shower ceremony stayed with me. Short of hiring a young Indian boy to man a ladle, I became consumed with very thoroughly washing each section of my body twice. My shower ritual continued to evolve over the years,  one thing added on another until it  required a contoured, long-handled back scrubber, no-skid germ-resistant shower mats, scalp and hair rejuvenating gels, foot scrubbers, three gradations of loofah sponges, shampoo and rinse trays, soap dispensers, a custom shower head, and a vast array of emollients of the highest purity, having been proven (relatively) safe after several hundred toxicity tests on the eyes of formerly sharp-sighted eagles, falcons, and owls. My shower ballooned into a sudsy, three-ring circus.

Then, one day, I watched a movie, most of which has long since faded from memory, except for one particular scene. The plot involved a lady and a man, strangers, both visiting London, one for a wedding reception, the other for some vague business event, both booked accidentally into the same hotel room. Of course, the hotel was sold out and, after much wrangling with management, both were left with no choice but to surrender to the fact that they would have to share one tiny room. Time was short and the man made no attempt to shield himself from view in preparing for his shower. He simply undressed, indulged in his shower behind clear glass doors, and then stepped out afterwards, drying himself in the middle of the room, all in full view of his roomie, with not even the slightest effort at affecting modesty. She, at first shocked at his casual lack of inhibition, began nervously chattering away, peppering him with inane conversation while trying and failing to avert her eyes throughout. Of course, it didn’t hurt that he had the body of a Greek god, and the looks of Cary Grant, while she was tall, thin, athletic, and excruciatingly pretty, but then this was a Hollywood production and, admittedly, wouldn’t have been half as entertaining had he resembled Ernest Borgnine and she, Ethel Merman.

His having lowered the modesty bar to zero altitude, she, feeling a bit saucy by this time, decided a bit of quid pro quo (or tit-for-tat, if you prefer) was in order. Feeling compelled to bump the ball back into his court, she followed up with her own shockingly brazen display of (nervous) casual immodesty. It was his turn to watch her inadvertently comic, yet ever so sexy effort to match his bravado in all things shower. After restoring her body to its immaculate loveliness with equally efficient brevity, she stepped out, dried herself, and then both, standing side by side in front of the closet, began dressing and exchanging side glances while adorning themselves in their Sunday best before walking out of the room together.

My point in relating all of this is that after watching that actor get into the shower with only a small bottle of shampoo and a bar of soap, wash his hair, soap his body, rinse off, and step out to dry himself, all in under 90 seconds, my life hasn’t been the same. Observing that Hollywood shower changed my life. No muss, no fuss, no elaborate creams, gels, salves, no tools, no scrubbing, no abrading . . . simply lather, rinse, and DON’T repeat. I was so impressed by that scene that I immediately began disposing of my shower arsenal in favor of one small bottle of shampoo and a bar of soap.

Facing the prospect of a shower no longer intimidates me since my breakthrough moment, and all it took was a little movie magic. When it’s that special time of the day, I simply play the scene from the movie in my head, with me in the starring role, and my favorite girl of choice watching from the doorway. There I stand, unashamed, stripping off, grabbing a bottle of shampoo, a bar of soap, and then performing my own interpretation of Act 2, Scene 1 from that unidentified yet inspirational screenplay. The only addition that might enhance my performance even further would be convincing someone to stand by until I finish, and then yell, “Cut and print!” Hooray for Hollywood.

2 Responses to Hollywood/Bollywood . . . It’s Only a Shower