“When she changed her name to O’Day, one of greatest exponents of the art of jazz singing came into being. Her unique sense of rhythm and dynamics quickly set her apart, and she demonstrated her great skills with the bands of Woody Herman, Stan Kenton, and Gene Krupa. After leaving Krupa in 1946, O’Day set out on a very successful solo career that continued right up until her death on November 23, 2006.”—Dean Pratt 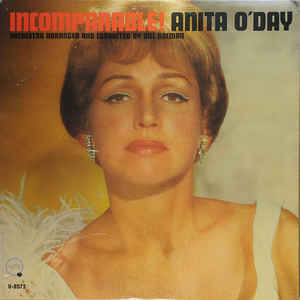 Author’s Note: My friend Audrey Mannes Mosello put this (vinyl) ball in motion when she asked me to post my favorite albums—my essential listening list—on my Facebook wall over a specified period of time. Or something like that. Audrey, you know what you asked, but I doubt you expected the deluge that would follow as a result.

PENDLETON South Carolina—(Weekly Hubris)—March 2020—Anita O’Day is in my spotlight this March, so I’ll be sharing with you five of my favorite LP’s by this unique vocal stylist.

Anita Belle Colton, a Missouri-born jazz singer of the big band era, forever shattered the stereotype of the “girl singer.” While other women vocalists were decking themselves out in lavish evening gowns, O’Day’s wardrobe comprised a band jacket and pencil skirt: in the eyes of her audience, she wanted to be seen for what she was, a hip jazz musician.

When she changed her name to O’Day, one of greatest exponents of the art of jazz singing came into being. Her unique sense of rhythm and dynamics quickly set her apart, and she demonstrated her great skills with the bands of Woody Herman, Stan Kenton, and Gene Krupa. After leaving Krupa in 1946, O’Day set out on a very successful solo career that continued right up until her death on November 23, 2006. For a comprehensive insight into one of the truly remarkable women of jazz, check out her 1998 memoir, High Times, Hard Times, and the documentary film “Anita O’Day, The Life of A Jazz Singer,” directed by Robbie Cavolina and Ian McCrudden.

“Anita O’Day Sings The Winners,” and “All The Sad Young Men.”

The album features the usual unique and terrific arrangements by Gary and, due to a plane flight snafu, Anita had to record her vocals to the existing, pre-recorded tracks. That said, this album is a gem.

What an era to be in the recording studios for these talented musicians. It had to be a thrill to walk into the room and see these cats waiting for the downbeat. At least we still get to hear them, now and forever, and for that I am eternally grateful. More essential listening to come in April.

Dean Pratt has been collecting records, CDs, books, air checks, and tapes featuring jazz, Big Bands, and the Swing Era for six decades. A trumpet player who has been on the road with the best of the Big Bands, and leads his own big band in Manhattan, The Dean Pratt Big Band, Pratt is also frequently called upon by authors for information about the genre, and interviewed as an authority in the field by such networks as NPR. His vast personal jazz collection (some 12,000 LPs, and 10,000 CDs) has also served as an aid in assisting his clients in their search for those who may owe them royalties. Pratt has served as producer, compilation producer, and liner note author for a number of Buddy Rich CDs, including the legendary drummer’s reissues on Pacific Jazz/Blue Note. He has as well acted as conductor, music coordinator, and liner note author for several projects by DMP Records, on which he also made his debut as a vocalist. He is producer, conductor, and liner note author for his own CDs: Groovy Encounters, published by Amosaya Records; and 16 Men & A Chick Singer Swingin’: Pratt Brothers Big Band Featuring Roberta Gambarini, published by CAP Records. Pratt makes his home in South Carolina, but commutes regularly to New York City to rehearse his band.
View all posts by Dean Pratt →
This entry was posted in Uncategorized. Bookmark the permalink. Follow any comments here with the RSS feed for this post. Post a comment or leave a trackback: Trackback URL.