“Eating Well Is The Best Revenge”

ATHENS Greece—(Weekly Hubris)—11/21/11—In the 60s, when I was a resident of the Big Apple, the Fifth Avenue buses used to stream downtown with this seductive ad along their sides: “It may be November in New York, but it’s still summer in Greece.” 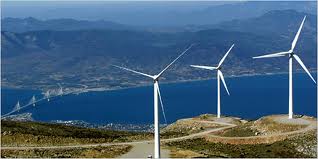 I’ve been wondering what happened. Friends in New Hampshire haven’t even turned on their central heating, while all week I’ve been shivering in three layers, legs wrapped in a sleeping bag, with the temperature at 14.5 C in our bedroom (somewhere in the mid-50s F). With Iran the only country willing to sell Greece oil, and the price having doubled since last winter, we’re rationing our consumption.

And it’s been blowing, furiously, nastily, vindictively from the north for almost three weeks now. As if it’s in league with the troika/IMF-EU Central Bank-Brussels to punish us, show us what austerity really means.

The other evening, still on Andros, we listened to a favorite radio program that devotes an hour every Sunday to a Broadway musical. That night it was “Annie Get Your Gun” with the original cast. Ethel Merman had me smiling, almost weeping, with nostalgia as she blared out one hit after another (the LP was the first I ever bought, aged 10).

But where’s the sun?

We did have a couple of days back then, when the sun coaxed us out of heavy jackets while we were picking olives. But the wind still bit, and there hasn’t been a glimmer since. I lie. Helios made his appearance for half an hour today, just long enough to remind us of his existence, and throw his glow on some red and yellow leaves as we drove to the supermarket. He’d retreated by the time we emerged, with a new stock of beans, lentils, and chickpeas for the empty larder. (I was horrified to discover that the staples I’d been saving for that proverbial cold and rainy day had all expired. One bag of split yellow peas [Greek fava] should have been consumed by 2006!)

Waste not, want not. I can hear my English nanny tut-tutting, shaking her finger at wasteful me trying to hide my peas under my fork, balking at another mouthful of sandy spinach.

But back to Andros, where the wind since we left has been ranging between 7 and 10 on the Beaufort Scale (various degrees of gale). We suspect it will have detached the pergola and shaved the lemon tree. Luckily, we got to the olives just in time—had a good haul (for us) of 85 kg (almost three times last year’s harvest), which oozed a respectable 18 litres of delicious thick green oil. That might last us a good six months. We’ll probably have to forget about the three trees laden with olives too green to pick.

As you might imagine, not everyone is displeased with our gusting winds and Andros’s reputation as one of Aeolus’s haunts. The god’s actual home was said to be “next door,” on Tinos.

In fact, while shopping for artisanal island cheeses at Yannis Batis’s emporium of organic and traditional Greek foods in Gavrio, we learned about a project to install a wind park (what a euphemism) in northwest Andros, our neck of the woods, as the saying goes. Yannis, our source for inside information as well as gastronomic goodies, painted a dire picture—of a congeries of 50-something mammoth turbines, huge trucks bearing them up our serpentine roads, tens of kilometres of roadworks to accommodate these loads, a couple of giant buildings and, most worrying to us, pylons striding from the site to a new sub-station at one of our delightful and almost secret beaches. 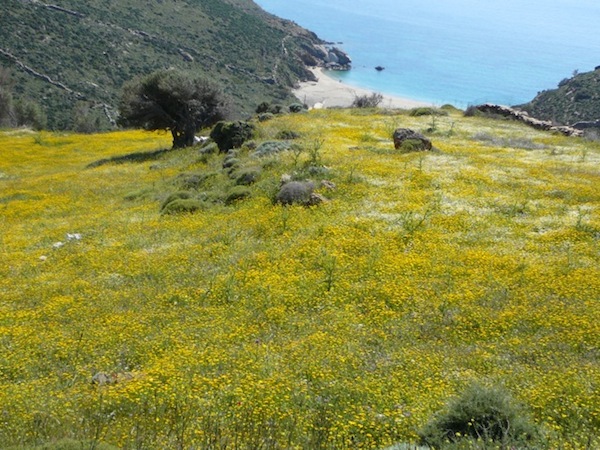 Hands off this secret beach. You wouldn’t suspect that a small “sub-station” already exists here. But that’s not all bad. Its presence is enough to ward off strangers and it doesn’t contaminate the pristine waters.

It was quite enough to take our appetite away. But Yannis did give us a printed invitation to a meeting on the subject in the Hora, our main town, organized by a group of ecologists.

It’s a long drive at night, about 1½ hours from our house to the island capital, but we felt it would be worth it. Know thine enemy. And a friend there invited us to join her at supper afterwards.

We arrived at the appointed hour, almost the first to appear. Very un-Greek of us. People trickled in and the meeting eventually started, with three short films on the evils of wind power. One of them showed turbines glowering over many of our most stunning coves. A discussion followed, with experts from other islands—Crete, Ikaria, Skyros—expressing doubts and sadness at what was happening there. “The government needs money so they’re selling our natural beauty spots for foreign-sponsored energy projects. The decisions are made in Athens. We try to protest, to have some input, but no one is listening,” said one person after another.

Mayor Glynis spoke without bluster and with welcome reason. “I’m not against Aeolian parks for this island but we need to be sure they’ll be only at the northwest and southeast tips and not damage our unspoiled mountains and coasts.”

But baleful prognostics followed so, fed up, but hungry, we got up and left. The decision in Athens had already been published. Our opinions did not count.

It was time for nourishment of a palatable nature to rescue our plummeting spirits.

I Parea taverna on the main square had undergone a facelift since we last snacked there after a visit to a Picasso exhibition years ago. It had adopted the new look that’s become the norm all over Greece in the last ten years, which emphasizes a clean, minimalist chic over the clutter and grease stains of the past, and the encroaching plastic of cheap resorts. It had kept the same rush seats of old and plain wooden tables, but painted them in a pale pistachio green. The sparkling cutlery and glasses, plaster-free stone walls, and imaginative lighting immediately restored some optimism.

If the food was as good as the ambience promised . . .

We sat down and ordered some wine for immediate sustenance and it arrived with a plate of bruschetta, unasked for, a treat from the house.

The salads and mezedes had just landed when who should walk in, alone, but the villain of the evening: the German entrepreneur who was going to destroy our island with his wind park. Our hostess, who knew the lanky young man by sight, invited him to join us.

Before poor Till sat down, we were pelting him with questions.

He must have answered them, graciously, for about half an hour before he even touched a morsel. I felt sorry for him.

“We don’t mean to be rude.” I said, “Have some of this delicious pork with lemon sauce.”

“I don’t usually eat pork,” he said, but took a spoonful anyway.

And continued assuaging our fears. The turbines would be out of sight, they would be brought in segments, the road system was adequate, the residents of Kallivari had all given their consent, the project would bring 30 new jobs to the island and, most important to us, all the cables would be laid underground or underwater and would not harm our beaches but would go directly from Kallivari to the mainland to join up with the national grid. It would take ten months to complete. And yes, the agreement had been signed, but the financing was still being worked out. So it would not be starting next week.

Till took a second helping of the pork, and said, “Why would I want to harm this island? I have a house here.”

Round about 11, the other group entered the taverna, the ecologists and the visiting speakers. They’d obviously been airing their views for a long time. But we were happy to have heard the other side, too, and could go back to our corner of Andros without that sinking feeling in our gut.

It is an ill wind that blows no good and if our winds may be harnessed without blighting the island, we can live with some development.

Time will tell. I hope it won’t say nothing but, “I told you so.”

And if the sun would only come out, too, we’ll be All Right.

This is not the pork with lemon sauce that we had in Andros. Instead, I’m giving you a variation on one of our favorite pork dishes. The stew is usually made with lemon, but this version with tomato is also sublime.

Clean the celery carefully, making sure to remove any sand, and stripping off all the strings. Macerate in a colander for about an hour sprinkled with a couple of tablespoons of coarse sea salt. Rinse and wring the stalks and leaves as you would a sweater; this helps them to cook more quickly. Cut the celery in 9 cm (4 inch) pieces and parboil for about 10 minutes in a large pot of boiling water. Add the thicker stalks first and cook them about 5 minutes longer. Discard the water and drain.

Parboil the pork, skimming off the scum, for about 10 minutes. Discard the water, drain and dry off the pork. Brown the pork in batches in a large saucepan or stew pot with half the oil. Remove the meat to a plate, add the rest of the oil and brown the onions and garlic over low heat. With a wooden spoon, stir in half the wine, replace the meat, add the tomatoes, bay leaf and salt and pepper and simmer, covered, for about 1 hour.

Add the celery and the rest of the wine and simmer for another hour until both celery and meat are meltingly tender. Serves 6.