“He started collecting all the paperwork, voluminous, even though no house had ever been built there, and had almost completed the process when, two days before the deal was to be signed, one tax still remained unpaid, and seemingly unpayable.”—Diana Farr Louis 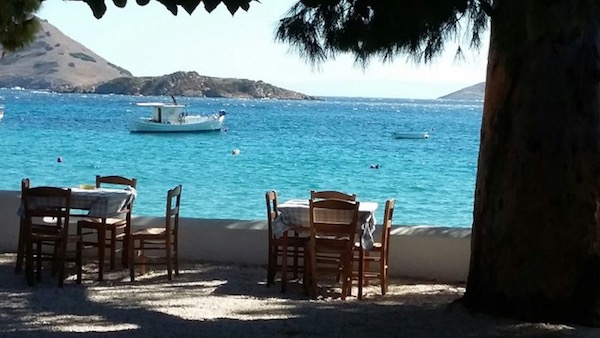 Taverna by the sea.

ATHENS Greece—(Weekly Hubris)—October 2019—(NB: The photos in this column show why people are prepared to unravel tangles of red tape in order to have a home in Greece.) They’d been trying to sell the house for well over a decade. Built with love and care on a fashionable Greek island, the place had become more and more of an albatross as family needs changed, children grew up and moved away, and pension cuts combined with rising taxes made it too expensive to maintain. With The Crisis, more and more houses went on the market, and fewer people seemed interested in buying them. Not even Russians or Chinese, since this was not Mykonos or Santorini.

Until a year or two ago. Then the nibbles started as more and more self-proclaimed real estate agents with improbable nicknames like Joker and Nonsense brought foreigners and Athenians to examine the property. Usually, the reaction was the same: “Very attractive, needs a bit of work. We’ll get back to you.”

Yet they never did. Until this spring, when interest picked up and there were several inquiries every month. Towards the end of May, one suitor declared himself, made an offer—though not as much as the owners had in mind—and was accepted. For three days. After he met the owners and their lawyer, who found him charming and “civilized,” he revealed another persona in a menacing phone call, requesting and then demanding they add on two extra rooms before the house changed hands.

“It’s done all the time. Never mind if it’s illegal. It will be easy for you to carry out the construction and I will pay the fine.”

Having only recently finished legalizing all the minor infractions on the property, the owners were aghast. But when they said, “Under no circumstances,” the prospective buyer’s tone got so ugly, they put the phone down and decided they’d rather keep the house than sell it to Dr. Jekyll and Mr. Hyde. They felt vindicated when their architect told them they’d go to jail if they carried out his wishes.

A quiet period ensued, during which a friend who’d also been trying to sell his land on a different island finally found a buyer online . . . in Israel. He started collecting all the paperwork, voluminous, even though no house had ever been built there, and had almost completed the process when, two days before the deal was to be signed, one tax still remained unpaid, and seemingly unpayable. Repeated calls to the municipality of the island had resulted in repeated promises to “have a look and get right back to you the next day; the paper is right on my desk.”

Nicholas, let’s call him that, could not even find out how much he had to pay so, in desperation, he rose early, drove to the port, sailed to the island, and drove another hour to the Town Hall. There, he met the unapologetic secretary, who presented him with an electricity bill—even though the property had no electricity—for community services amounting to a whopping 23 euros, which the mayor himself had to sign. Never mind that it had cost at least 200 euros to pick up the offending paper, which could so easily have been sent and paid electronically. 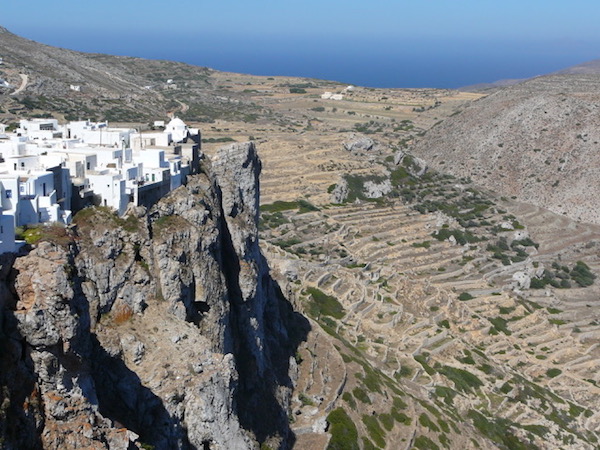 Meanwhile, Dr. J/Mr. H, realizing the error of his ways, began renewed overtures on the other friends’ property. Seemingly chastened, he waged a determined but polite assault, making generous concessions, until finally he wore down their resistance. Then began their own paper chase: which of the many architectural plans was the valid one? Where were all the tax receipts, the deeds, the building permits, etc., etc.? Piles of folders filled their desk and the chairs and floor around it, changing places and contents in the middle of the night when no one was looking. The owners began to think they were going mad and had the feeling their architect might be thinking them senile.

“How large is the storeroom in the basement?” was one question he kept asking.

For days, he did not accept the answer—“There is no storeroom in the basement because there is no basement”—but followed up with, “Where does that door next to the furnace lead to? How big is the room?” only to be again unsatisfied with the reply, “That is a broom closet, 60 cm in depth.”

Eventually, after several weeks, the deal was almost ready to be finalized, when the architect said, “There is one little problem. The installation room of 20 square meters under the swimming pool has never been declared on the property tax that went into effect five years ago. Pay the fine and we’ll be ready to go.”

The owners fretted all weekend, sleepless, expecting the worst. But when Monday dawned, and they trotted down to their tax lawyer, she told them blithely, “That will be 98 cents; it’s too small an amount for the computers to handle, so the fine is waived.” The sigh of relief could probably have been heard on the Acropolis. 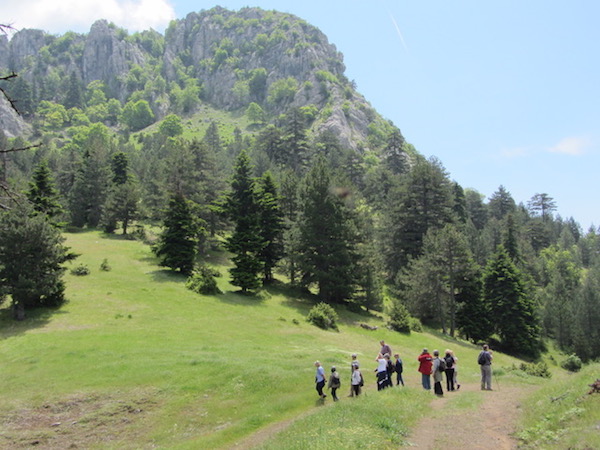 All that remained was to go to the island, meet with the notary, pay a visit to the tax office, and then sit for several hours while the notary read the whole contract in the presence of buyer and seller, lawyers, and real estate agent before heading for the bank.

These stories put me in mind of my first acquaintance with a land sale sometime in the late 1970s. As told to me by a Greek friend and her Scandinavian husband, it involved a love affair with a hillside in Attica. On impulse, they got out of their car to have a look and found a bunch of what we used to call “peasants” sitting on the ground having a picnic. Welcomed with wine and morsels of food, they set in motion an inquiry about property ownership, which directed them to the mayor of the nearest municipality, who very obligingly put the local notary at their assistance.

The transaction was complicated by the fact that there was more than one owner but, eventually, all of them were persuaded to agree to sell their plots, apart from one old codger who, though childless, had a sentimental attachment to his piece of paradise. The notary won him over with a tall tale about The Virgin appearing to him in a dream and instructing him to give the old guy some money. Who could refuse The Virgin? Barba Yiannis’ wall of resistance began to crumble.

One evening, about nine months after the original encounter, below the hillside, 17 “mature” men and women dressed in their best black suits and widow’s weeds gathered at the notary’s house to complete the transaction. Under the watchful stare of stiff ancestral portraits, the men fiddled with their worry beads, the women peered out from under headscarves, eager to gossip about the foreign couple, while the notary read the contract, sheaves of paper that described the history of each individual plot in language that resembled Genesis there were so many “begats.” 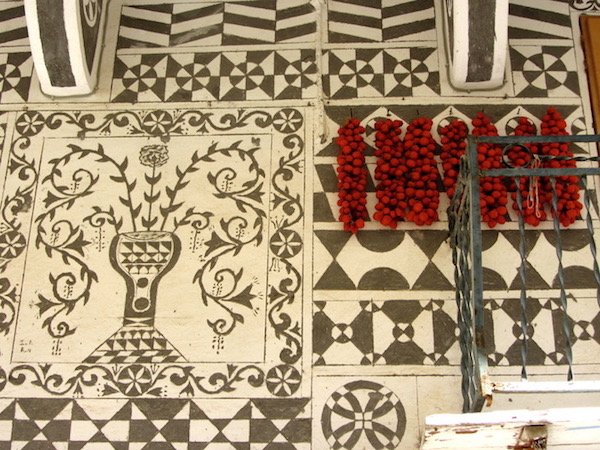 After the interminable ceremony, the new owners presented each seller with an envelope containing wads of drachmas, shaking their hands and receiving wishes that they put down “good roots” in exchange. That ritual accomplished, they all repaired to the kitchen for a glass of wine and another exchange of envelopes and wishes. As my friends explained, “The first envelope contained the amount that was declared to the tax authorities, while the second supplemented the first to bring it to the amount agreed upon unofficially.

When Barba Yiannis’ turn came round though, a complication arose. “You may have bought my land,” he announced, “but the deed says nothing about my olive trees!” He rejected their pleas to let them buy the trees, but peace was finally found with a compromise: he would continue to pick his olives, while the new owners were entitled to enjoy their shade.

A few weeks later, my friends went round to have a look at their new property and found an old woman by the side of the road picking “horta” (wild greens), and tucking them into a copious apron. They paused to say hello, and she, bursting with excitement, declared, “See that hill up there? Well, they say a German has bought it and he’s digging for buried treasure. It seems he was here during the war and he left his gold behind, so now he’s come back for it.”

“I see,” said our friend. “Do you think there’s any chance we could dig, too?” 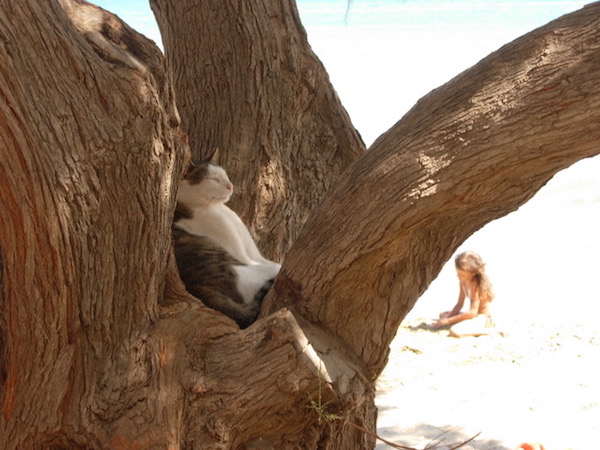 Your very own place to relax.

Fasolakia ladera, which could be translated unappetizingly as “Oily String beans,” is a dish I seem to have been cooking about once a week recently. The beans on Andros, where we spend the summer, are so fresh, so green, so tender . . . and utterly stringless. They can be eaten hot, cold, or room temperature and, like most dishes that have lots of olive oil, they are always even tastier the next day, so I make double the quantity.

garlic, as many cloves as you like, finely chopped with

Trim the beans and cut in half if necessary. Heat the oil in a large skillet and saute the onions until wilted, then add the beans and toss in the oil for about 5 minutes. Add the grated tomatoes, chili pepper flakes, bay leaves, cover, and cook over medium heat for another 5 minutes. Pour in the broth, bring to the boil, cover and simmer until the beans are tender and most of the liquid is absorbed. When almost ready, add the sliced tomato and garlic/parsley mixture and other seasonings, if desired. (We don’t cook with salt anymore, and the broth will add enough salt for most people.)

Serve any time you want.

Note: This is a variation on my dear friend Bonnie Tangalos’ “Beans a la Pius,” in her lovely book Bonnie’s Best Bites, published in the 1990s by Lycabettus Press, Athens.