Lancing the Boil: The Saga of Abby, The Formerly-Wealthy Mormon, Chapter Two*

“Can an ego so damaged ever be fully revived and, if so, how long and laborious a task would it be to return it to its former glory?” Cusper Lynn 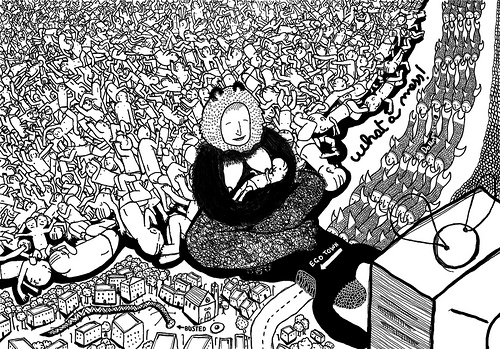 SARASOTAFlorida—(Weekly Hubris)—10/22/2012—The human ego is, despite all representations to the contrary, a fragile thing. A single horrific shock can snuff it out entirely and leave behind nothing but a vacant, staring, uncomprehending shell of a human being, while the trials and tribulations of unrelenting misfortune can strangle it till it is little more than a grey wisp of its former self, its reason and animating force but a parody of something once vibrant and often outrageously vital.

Can an ego so damaged ever be fully revived and, if so, how long and laborious a task would it be to return to it to its former glory?

“Hey, Cusper, you know why I love to write books?” Abby Norman the “formerly wealthy” Mormon asked me as we sat in the television studio’s green room.

The answers to my musings were, yes and, in Abby’s case, about three days. I studiously ignored Abby’s question and considered the state of my own ego.

“Cusper,” he renewed his demand for my attention, “do you know why I love to write books?”

Because convicted felons aren’t allowed to have guns? Because it is easier than robbing people individually or running for office? “Why?” I finally asked, trying not to sound peevish.

“Because it allows me to share my wisdom and experience with generations to come,” Abby smiled.

He had me there. Despite a poor market, the publishing industry consistently has the bible and Mein Kampf in print, and sales remain steady.

“That’s true,” I agreed with the resurrected motivational speaker.

In the week following our campaign to resurrect the brand of Abby Norman the Wealthy Mormon—which started with taking away his pills, his gun and getting him a shower—we had been surprisingly lucky. Our production manager, Gene—whose failed career as a documentary filmmaker included the distinction of having had a restraining order against him taken out by members of Ken Burns’ production company—had assembled our preliminary footage of Abby Norman’s transformation.

Like all motivational narratives, it had the moments of depravity—think Siddhartha vomiting by the river or televangelist Jimmy Swaggart being arrested with a prostitute—followed by the despair, the epiphany, and the beginning of the humble, yet triumphant march back to redemption. The teaser video clips of this narrative—which had been intended for commercial and promotional purposes—had been posted on Abby’s newly overhauled website.

Matt Tomlinson, who goes by Tomlinson M—insisting that the M stands for Marketing Magic—had provided his own unique contribution to this project, which was another motive for me to shoot him with Abby’s gun. The fast talking, less than subtle purveyor of doomed projects, unpaying prospects and completely idiotic schemes involving the world of motivational speakers and personality marketing, was taking credit for what was, in all honesty Gene’s handiwork, my idea and one hell of a lot of plain dumb luck.

The video posted on the website had gone viral. Not the full seven minutes that was meant to take the viewer briefly through the narrative arc, just one minute fifteen seconds of it. This was the footage of Abby Norman, the Wealthy Mormon, being driven from his squalid, foreclosed-upon, Siesta Key home to a nearby beach so he could have a shower and a shave and 15 seconds of him shouting “Bullshit! I am broke and I am broken!”

This was sampled, looped and released as part of a music video for a White rap group called “The Sarasota Soldiers,” whose lyrics reflect the often gritty and hard street life of affluent, White teens who live in St. Armonds Circle. For the viewing public, it was difficult to say if the video “Washing the Filthy Rich” was intentionally ironic or if the band was just that grotesquely obtuse. But, intent aside, “Washing the Filthy Rich” had charged forward into the consciousness of the profoundly polarized environment of American politics and caught fire.

In California, a group of activists had taken to ambushing CEOs, washing them and recording the proceedings while shouting out the company’s transgressions against its employees, its consumers, its shareholder, the environment and humankind.

In New Jersey, gangs of bored teenagers were grabbing the homeless for “Bum Washes,” and posting the videos online.

The media was amused, inspired and appalled by these events. The result was that the Soldiers now had a major recording contract, and political operatives, and commentators had copy for print and broadcast. Police had numerous arrests to make for kidnapping, assault, and battery . . . and we had the local news circuit interested in “the bum at the heart of it all.”

“Thank you,” Abby responded, in a genteel and drawling tone.

Inwardly I cringed. Abby’s ego was galloping past the manageable stage and this did not bode well for our anticipated campaign. After the production assistant left, I looked at Abby, who was humming a happy little tune and smiling broadly.

“Are you ready?” I said, carefully prodding the edges of what I suspected to be a rapidly bloating and quite possibly puss-filled ego.

“Always,” he said, turning his now-manic smile on me.

Looking into those eyes, which when I first saw them had been bloodshot and wild, I began to read a plan that was marching off in its own direction. What it was, I could not say, but that it varied from the carefully practiced script was clear.

“We are very lucky,” I observed.

“Yes, we are,” he answered, unfazed by the premise that his present circumstances might not be the product of some sort of cosmic birthright.

“It’s a good thing it’s such a slow news cycle,” I said, then looked up at the monitor where the current guest was being interviewed.

Out of the corner of my eye, I could see the smile recede from Abby’s face.

“She’s been a real estate agent for 15 years,” I commented.

“Who has?” Abby said, turning his eye to the monitor for the first time since we’d arrived at the studio.

“This morning’s main interview. She’s a double tie-in. She is now the Number One real estate sales broker in Hillsborough County,” I said, watching the morning news anchor, Margaret Garcia, move point-by-point through the story with the 41-year-old real estate agent.

“Well yes, technically she could be called a triple tie-in,” I answered. “First, she lost nearly everything when the real estate market crashed. Blew through her savings, had to sell her house, her Lexus, and move in with her mother. Then, she became depressed and overweight. Now, she has fought back against her depression, lost 80 pounds, and has made back a lot of what she lost.”

“They’ve been hyping her all week. She’s considered a metaphor for the Florida real estate market; struggling, but march-back-stronger for the experience,” I concluded.

“But I’m on after her . . . .” Abby’s ego quivered, hoping to assert that she was nothing more than an opening act for what was to be his triumphant return.

“Yes, the zoo keeper for the Lowery Park Zoo had to cancel. The Ocelot was sick,” I smiled. “Lucky for us, isn’t it?”

“A fat real estate agent and a goddamn cat?” Abby’s smile was entirely gone and replace by a scowl.

“Actually, she’s quite thin and she’s working on a fitness book. This is just a preliminary marketing tour to promote her real estate brokerage.”

“. . . how surprised I was that a video of my struggles had been used this way on the internet . . .” he muttered.

“And are you angry or upset about this?” I asked the obvious question Ms. Garcia would throw him

“No. The internet is a place where ideas and images are constantly moving, circulating, and being reborn.” He repeated the mantra I’d taught him.

“Why did you put up the video of your personal struggles?” I asked, throwing another of the standard questions at him.

“I put it on cusperlynn.com to share with the world my experience, because I am not alone. People are hurting, people are struggling, and I wanted them to know that you can come back from this. That is why I put the video up on cusperlynn.com,” he said, his inflection appropriately humble, but pleasant.

“Good, very good,” I observed. “Just remember to try to get the domain name in three times whenever you mention it.”

“A fat chick and a goddamn cat,” he muttered.

“Mr. Norman,” the production assistant said, entering the green room. “We’re ready for you on the set.”

“Go out and knock ’em dead,” I said, patting the formerly world famous international author, corporate consultant, and political gadfly on the shoulder in a condescending manner.

“Yeah, sure,” he muttered, as he left the room.

I watched his performance. It was perfect. Humble, self-promoting, thankful, engaging and nearly human. He even managed to mention the domain name three times whenever asked about the video.

For my part, I considered again the question of the human ego. I had managed to lance the boil. The question was, could I continue to do so for the next four appearances I had him booked for that morning? I had my doubts.

Note: The image accompanying this column was created by (tommy the pariah[away]).

Cusper Lynn, whose accumulation of alphabetic suffixes makes formal introductions nearly impossible, is the CEO of Hell Bent Press, and a prolific blogger/author, who self-identifies—primarily, these days—as a “consultant.” A mega-cigar-smoking Midwesterner-become-Floridian, Lynn has also worked in radio (as a DJ), banking, bookselling and community theater (do not, hold that against him), and has produced a punk album (you may hold that against him), four children, and a novel titled Facebook Ate My Marriage (www.facebookatemymarriage.com; www.cusperlynn.com; www.hellbentpress.com ). Lynn says he was, in the second grade, “bitten by the writing bug,” which he traces back to “the accidental discovery that a well written essay could, if properly slanted, decrease the beatings meted out in the dark ages of public school education.” He adds: “The other two useful things I would take away from those long-ago classrooms would be the ability to touch type and a clear understanding that the world was aggressively disinterested in my wellbeing.” Subsequent success as a physician and an advisor with an uncanny ability to provide information and intellectual succor of all sorts to patients and clients of all stripes have somewhat softened Lynn’s stance, as evidenced by his literate, thoughtful writing in The Occidental Ape.
View all posts by Cusper Lynn →
This entry was posted in Uncategorized. Bookmark the permalink. Follow any comments here with the RSS feed for this post. Post a comment or leave a trackback: Trackback URL.