“I took a triple-take as I noticed a three-story treehouse in the process of being built, and looked for a place to park to study the scene for a while.”—Meredith d’Ambrosio 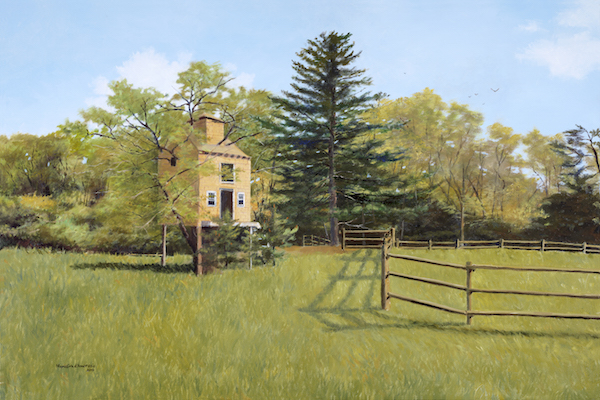 Driving home from Snug Harbor after shopping for fresh seafood in Duxbury, I decided to experiment by taking a shortcut onto Surplus Street, through an intriguing area near the harbor. I took a triple-take as I noticed a three-story treehouse in the process of being built, and looked for a place to park to study the scene for a while. I drove down a long driveway to ask the owner’s permission to sketch this delightful place. I discovered that the treehouse was built around a big old white ash tree.

The next day, I began to depict the scene with black pencil while the owner’s young boys rode their dirt bikes around me, back and forth, as I sketched. They stopped to watch for a while, and told me that the treehouse was built for them to enjoy their play-time. I was especially amused by the limbs and branches protruding from the tree inside the house and sticking out of windows and other spaces.

Shingles had not yet been added. After taking the drawing home to my studio to paint the scene, two weeks later I was ready to drive by to see how much progress had been made with the shingles and other parts of the land around the structure. Where there was sand there was now grass growing everywhere, and shingles were finally in place. I will always wonder if asking the owner permission to paint the house had spurred him on to finishing the treehouse before the completion of my painting.

On my first visit to Auvers-sur-Oise, the charming French village where Van Gogh lived, painted, and is buried, my husband, Eddie Higgins, and I had been invited to perform in the concert hall of a stationary barge called Bateau Daphné, docked on the Oise River. Before our concert, I gazed through a porthole and was captivated by the mirror-like calm of the river. Spring was breaking through.

Continuing our stroll through the village of Auvers-sur-Oise, I came upon one of my favorite scenes, and the debut of Spring was apparent. With their thick greenish-gold trunks and newly sprouted light green leaves, the stately poplars lined the winding path along the Oise River, and mysteriously disappeared around the bend in the distance.

Note: D’Ambrosio’s upcoming museum-exhibition  will run from November 15, 2015 till February 14, 2016 at the Art Complex Museum of Duxbury MA. At the November 15 Reception, D’Ambrosio will be performing with jazz pianist Chris Taylor.