“My mother was 21 years old when she was released from her flight training. She had, painfully, already learned of war’s costs.”—William A. Balk, Jr 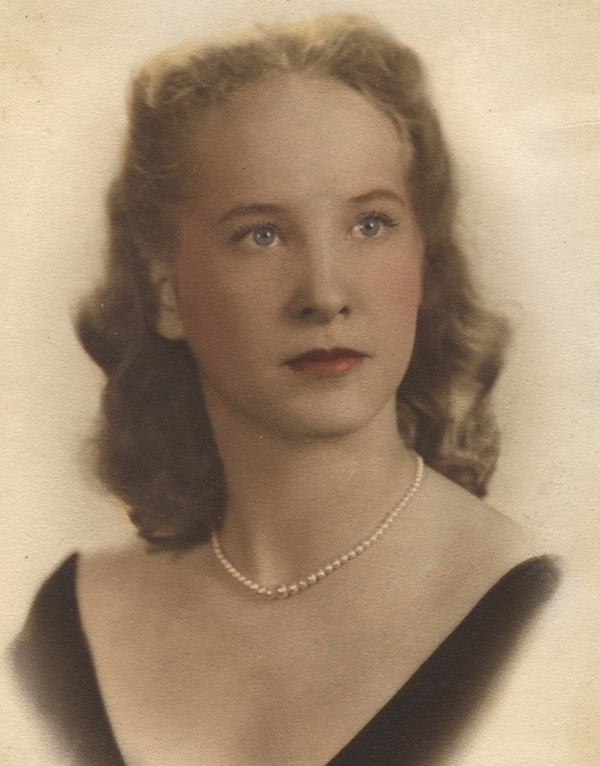 BEAUFORT South Carolina—(Weekly Hubris)—9/14/2015—Unlike Helen of Troy, for whom a terrible war was begun, my mother claims to have ended one.

She had been accepted into the WASPs—Women’s Airforce Service Pilots—and begun training to fly various military aircraft, which were then to be flown across the Atlantic to use in the war effort in the European and African Theaters of the Second World War. But, in 1944, the program was ended as my mother neared completion of her training and before she had delivered her first plane. My mother declares that it was the possibility of her appearing in the skies over Europe that forced both sides to find terms to end the war in Europe. It was only four months before VE Day.

I have prepared for her a big breakfast of softly scrambled eggs, a toasted slice of homemade oatmeal bread, and apple slices. At 89, she still likes her coffee black and freshly brewed. I bring it to her as she sets up her morning bridge game on the computer.

Her desk is beside the east-facing window, streaming the early sunlight into the room and looking out onto the last of the camellia blooms and the furiously competing cardinals and finches and wrens at the hanging feeder. Another beautiful morning.

I bring her the carafe to refill her coffee; her half-eaten breakfast is getting cold. Her hand on the computer mouse is poised and still, and her study of the card game before her is unfocused.

“Are you stuck?” I ask. “Need to figure out which card to play?”

There is no response. I take her hand and try again. “Mama?” Her mouth barely moves. “Mama!” No response. And then, a convulsive sneeze, dislodging her dental plates, which I remove. Stroke, I think. She begins to vomit and, quickly, I lift her from her chair and lay her on the floor, turning her on her side. She vomits several more times.

I cradle her head, madly dialing 9-1-1, and calling my nearby sister, all the while stroking her face and softly saying comforting words.

My mother was 21 years old when she was released from her flight training. She had, painfully, already learned of war’s costs. The year before her own flight training, she had married her childhood sweetheart. Her husband, as young, handsome, adventurous and bright-eyed as she, began the training—such as it was—as a bomber pilot; she and her husband’s younger brother hurried to Pensacola, Florida, to see him off to join his squadron in southern Europe. My mother was to be left behind to settle into married life alone while her new husband set off on his own odyssey.

The three gathered for a hurried and emotional farewell; upon the extraction of a promise from his younger brother to make certain his wife would be taken care of, should anything happen to him, the warrior-pilot flew to engage the enemy.

A month later, in July of 1943, as the Allies invaded Sicily and began the assault on Italy, the young husband’s plane was shot down over the Mediterranean. Neither he, his crew, nor his plane, was ever recovered.

The emergency room doctors found no evidence of stroke. My mother awakened before the ambulance arrived; talking and moving about. At the hospital, test after test was run; a small number of minor problems were identified—some stenosis of the heart, arthritis, etc. She was moved into the hospital for further testing and observation. Days later, she was released to go home. The discharge papers recommended no new procedures nor care; no new diagnoses.

Her visit to her own doctor, however, brought things into far sharper detail. Mama’s aortic stenosis was advanced; her episode of syncope had been likely the first of others to come. Surgical procedures were available, but might not be appropriate for an 89-year-old. The prognosis without correction was likely further episodes of syncope, increased likelihood of stroke, kidney failure, and heart failure.

Mama’s cardiologist recommended surgical replacement of the calcifying valve. “I just did the procedure on a 90-year-old woman,” he said, “and she’s up and walking well.”

Lengthy discussions about the surgery and recovery processes ensued among Mama’s children; we explored the likely range of developments if her condition were not treated, as well as the near certainty of death from the untreated disease. All five of her children were intimately engaged in her decision—HER decision, finally—about what action, if any, to take.

The young widow sought her own way to join the war effort, and she found the WASPs a seemingly perfect, and meaningful, channel for her energy and grief. Her brother-in-law had himself joined the Navy and trained as a torpedo pilot, but he had taken to heart his late brother’s admonition to see to the care and welfare of his brother’s widow.

By early 1945, this brother-in-law had joined a squadron of TBM Avengers aboard the carrier escort USS Marcus Island, had participated in the largest naval battle in history at Leyte Gulf, as well as the attack on Luzon, had won the Distinguished Flying Cross, and had “saved Rear Admiral Sample’s ass—literally” ( he was the pilot; Jim Edinger, his radioman). The squadron’s return Stateside before the Marcus Island inspired my mother to travel to the West Coast to welcome her late husband’s brother home.

With my mother returned home, we have each adapted, in his or her way, to her new situation. She is very clear: “I don’t want to die on the operating table. I don’t want to endure a horrendously difficult months-long rehab; I’m already crippled by this arthritis, and this’ll do nothing to make that better. When I die, I want to be at home, in my bed, with my family nearby. I have lived a full, rich life. No surgery!”

All five of her children are active participants in her care; some live at a significant distance from the homeplace, and their visits over weekends provide very welcome relief for the others nearer-by who provide daily care. Our mother loves seeing her children and grandchildren, who interrupt her now quiet and constrained daily routine.

She is in her own home. The 200-year-old farmhouse is hardly ideal for an infirm patient with a tendency to fall, one whose own age is nearly half the age of the house itself. Nevertheless, it was the hands-on exertions of my father, my mother, and their children and grandchildren that brought this old structure back to its present welcoming warmth. It is home to us all. 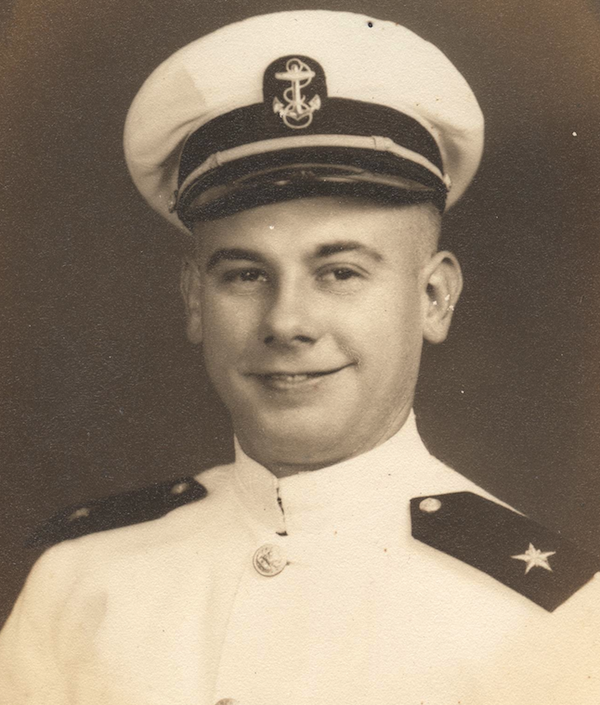 The younger brother in 1944, not yet married.

In that spring of 1945, the war was ending, my young mother was in love with her rock of support, and marriage and a family would mean a new beginning. The couple set out on a cross-country tour, visiting families of squadron members, along with the natural wonders of the country. They saw the Grand Canyon, Mammoth Cave, and Niagara Falls before returning to Georgia. My father completed college on the GI Bill. They began a family, embarking on a journey at least as challenging as any either had faced before.

She seems stronger now, in some ways. Physically, I mean. There was a time when the effort to stand and walk with her walker was more than she could muster. Now, she can stand on her own—although I am compelled to assist every such attempt—and she walks with her walker to the porch, to the dinner table, to her bed.

There is a lot of assisting. I help her with intimate requirements; I help her with dressing each morning. I love being able to cook for her. Occasionally, friends come to call on her. She enjoys such visits enormously, although she will be completely exhausted by them and sometimes barely remembers the visit afterward.

Bedtime has become—for me, anyway, her eldest son—a particularly poignant ritual. I help her walk to her bedroom, where she sits on the large bed she shared for a half century with my father. I’ve pulled back the covers, and she sits and begins undressing. I am needed to get her top off, either because the buttons are too difficult or because getting the pullover blouse over her head is sometimes too challenging to do herself. I’ve discovered that rubbing her entire back with Bag Balm provides her with exquisite pleasure, so she patiently waits until I do that.

She lies back, I cover her, eye drops go in, and she’s almost ready for sleep.

But I have found I, myself, require a small additional ritual.

I sit beside her bed for a while, holding her hand. We talk a little bit about the day just passed; about the day ahead. If there’s something that has left her a little confused, we try to get that straightened out. I ask her if it’s OK for me to wipe her face, and I get a soft washcloth; wet it with very warm water. I lean over her, both of us smiling, and gently stroke her beautiful face, still without wrinkles after nine decades of living fully.

I ask if she’s ready for me to turn off her lamp. She is. Then she says, very softly, very quietly, “Thank you, Darlin’, for all the things you do. And Peggy and Libby, and Erwin and Ted. You all are so good to me.” And I thank her for all she’s done for us over the years.

I turn off her light, and we each say, “Good night.” 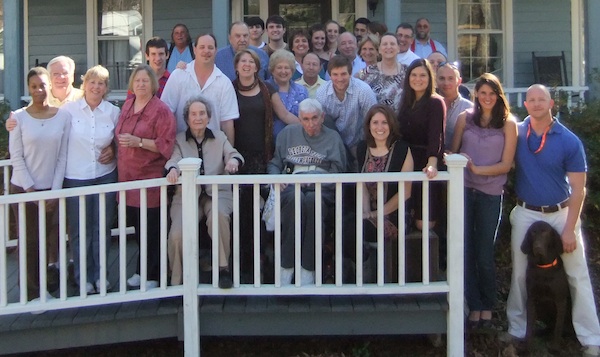