Love is the Drug & the Drug is Love

“Walking all over campus, my visit was delightful, but surprisingly not nostalgic. I was not wishing to go back to those golden days, not wishing to trade places with my old self. I was, however, overwhelmed, awash in a radiant emotion I just couldn’t pin down. What was happening?”—Jerry Zimmerman 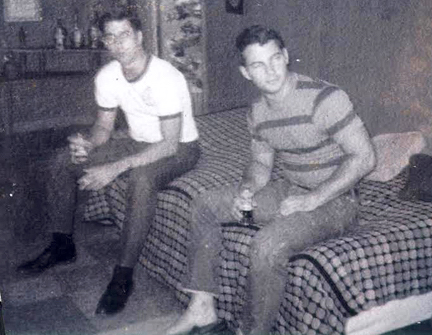 “As a scientific phenomenon, if you can create a condition in which 70 percent of people will say they have had one of the most meaningful experiences of their lives . . . well, as a scientist that’s just incredible.”—Roland Griffiths, in How to Change Your Mind by Michael Pollan

“It was without question the most extraordinary and significant experience this side of the Beatific Vision.”—Aldous Huxley

“All we need is love.”—John Lennon

It’s not what you think. I never took acid in my life, nor do I want to now. However, two fated events have slowly made their way through 50 years of unerringly focused travel, arriving at my doorstep almost simultaneously.

My daughter sent me several books this past Christmas and I have been engrossed in How to Change Your Mind, by Michael Pollan. The subtitle is a good hint to its contents: “What the New Science of Psychedelics Teaches Us About Consciousness, Dying, Addiction, Depression, and Transcendence.”

This exploration is extensive in its scope, delving into the deep history of psilocybin (mushrooms) and LSD (acid), the two most recognized and used psychedelics of our times. While these drugs have been criminalized for decades, there has also been ongoing scientific research carried out for just as many years. Studies now show great promise for the use of these drugs as therapy for many addictions and certain mental illnesses.

Almost all serious experimentation in this field is being conducted with volunteers taking mushrooms or LSD under fairly rigorous and monitored conditions. Although each participant has a very personal sense of her or his “trip,” two consistent experiences are being reported.

The first is a very clear and dramatic loss of one’s own individual ego or persona. Who you are, the “you” that makes “you” an individual component in this life, begins to slip away, eventually disappearing, leaving your energy free to blend with the energy of the universe. This is undeniably real, and yet the deep emotion of it is almost impossible to describe. The stunning import of this event is not a gossamer dream that evaporates upon coming back from your “trip,” but rather a deep and lasting shift that engenders seismic changes in the perception of one’s life.

The second consistent thread emerging from hundreds of these trials is surprisingly and wonderfully optimistic. Almost universally, after a rather ineffable journey, the travelers come back home with one common and undisputed discovery: “Everything is Love.”

Wow. Isn’t that what we all wish were true in our lives?

Two weeks ago, I found myself driving north on Route 80 through the middle of New York State, a very familiar route to me. I was going back to Syracuse, my alma mater, for the first time in half a century.

I was ecstatic! I had been invited by a friend to travel upstate to teach a class at his Aikido school and then to go see a Syracuse basketball game. Either of these events would be enough to make me hop into my car, but the idea of literally walking through my old college life again was not just the icing on the cake: it was the whole damn cake!

As I got closer to the city, I could see the smudge of buildings get larger and form into the familiar lines that many years ago made my heart jump . . . and my heart jumped again. I was returning to a very particular place that I had left so long ago, a utopia that had never lost its deep pulse in my life.

My four years of college in the late 1960s were heaven. I clearly remember standing at my dorm window, watching my parents get into their car to drive home, and thinking, “I am here all on my own, I have my own space, I can basically do whatever I want, I’m in ART SCHOOL, there are 15,000 people my own age on campus and half of them are GIRLS!”

Everything panned out exactly like that, and it was even better than I could have imagined! I met Sara in my very first class and shortly thereafter we were inseparable, getting married in our senior year. Art classes were as exciting as I had hoped, and two fellow students, Stan and Bill, became my life-long, soul-searching, neo-nihilistic, art-making friends. The four of us were soulmates, careering together through Syracuse on a four-year binge of hard work and serious carousing. 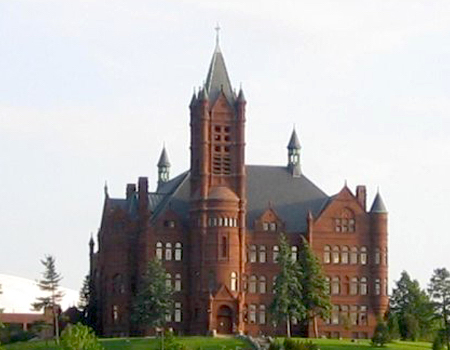 Now, five decades later, being on campus was, well . . . a trip! So much had changed, of course, but some very important landmarks remained, some unmarked by time, some modified but not unrecognizable. As I walked up the hill to Crouse College, where most of our art classes had been taught, it was just as it should be—unchanged. Entering the building, it seemed possible that it was the Freshman me doing exactly the same thing in exactly the same place. It’s not that my ghost was hovering nearby but, rather, that the ghost and I were layered on top of each other, alternately switching off and on like a human strobe. And I was happy being each manifestation.

Walking all over campus, my visit was delightful, but surprisingly not nostalgic. I was not wishing to go back to those golden days, not wishing to trade places with my old self. I was, however, overwhelmed, awash in a radiant emotion I just couldn’t pin down. What was happening?

I had the luxury of a nice, long drive home alone to sort through my evening and morning back at old SU, but it wasn’t until several days of stewing in my own effervescence that it came to me.

I hadn’t dropped acid, but the result was the same. I was experiencing L.O.V.E. A love that exists inside and outside of time and is so encompassing that it rattles one’s whole being. Treading the familiar paths of the university, everything I saw that reminded me of my college years was quietly reminding me of all the love that existed then: my love for Sara, my love for Stan and Bill, my love of being free, of being part of an exciting and creative community, my love of becoming myself. It was a time when all my receptors were wide open, and any love received then remains deeply embedded in all that I am now.

Sara and I are divorced, Stan and Bill live in different states, yet when I see them or when I don’t see them, all that love exists as it was and as it is.

A day after my return from Syracuse, I called Sara to tell her about my visit. We also ended up talking about the book by Pollan. She said the descriptions of the experimental LSD trips reminded her of a story she’d heard about a woman celebrating her one-hundred-and-fifth birthday. The woman was asked if she was afraid of death. She replied that she wasn’t afraid at all; she had died twice and was unhappy that, each time, she’d had to come back!

For now, even though it seems comforting to know that when the time comes to leave the “here,” and that the “there” might be even more fabulous, I still choose to love it up on this particular plane as much and as long as possible.

Tripping through the universe, or driving back to Syracuse, all roads lead to Love.

Jerry Zimmerman was born and bred in Pennsylvania, artified and expanded at the Syracuse School of Art, citified and globalized in New York City . . . and is now mesmerized and budo-ized in lovely Teaneck, New Jersey. In love with art and artists, color, line, form, fun, and Dada, Jerry is a looong-time freelance illustrator, an art teacher in New York’s finest art schools, and a full-time Aikido Sensei in his own martial arts school. With his feet probably and it-is-to-be-hoped on the ground, and his head possibly and oft-times in the wind, he is amused by the images he finds floating through his mind and hands. Author Photo: David Zimand
View all posts by Jerry Zimmerman →
This entry was posted in Uncategorized. Bookmark the permalink. Follow any comments here with the RSS feed for this post. Both comments and trackbacks are currently closed.