“How wonderful that our editor suggested this theme for our first columns of 2018. How timely! For, as I write, the Legion of Honor, a museum in San Francisco, has a segment of Klimt’s mural on display. I’ve looked at it, and will most certainly go back several times to gaze at it again. It is, after all, a visual reminder of my life-long love affair with Ludwig and the two Gustavs.”—Helen Noakes 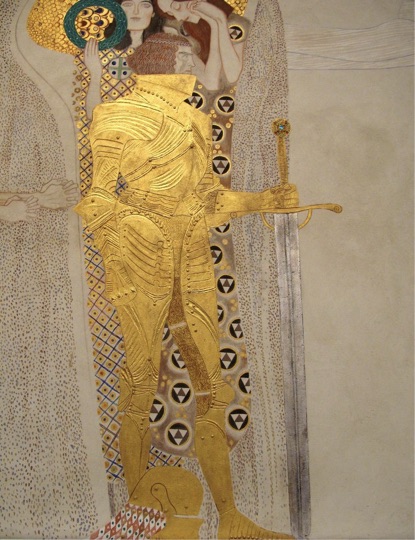 Gustav Klimt’s The Knight of the Beethoven Frieze, purported to be a portrait of Gustav Mahler.

SAN FRANCISCO California—(Weekly Hubris)—(This column first appeared in January 2018.)—When I first heard it, I was ten, and living in a two-story house in Yokohama, Japan. It was a fall evening. Our view of the ocean through the front windows, of distant Mount Fuji to our south, had been eclipsed by the night. My Great Uncle, Costas, was having an after dinner chat with my grandmother, at the dining room table. My mother was fussing with one household chore or another.

Our radio, which sat on a lamp table next to a blue leather sofa, was tuned, as usual, to Armed Forces Radio. Since it was a Sunday evening, the scheduled program was Live from Carnegie Hall. The orchestra, I don’t remember which, was performing Ludwig van Beethoven’s “Ninth Symphony.”

What it was about the music which mesmerized me, I could not articulate, but the first notes, hushed in tone, held mystery and promise. And when the melody surged, I rushed to the sofa and remained glued to the sound until the final note.

It was my first full experience of music. By that I mean it was the first time I not only heard the notes, but absorbed them. The living room, the people in the house, the house itself, did not exist—the music was all and everything. Every note resonated through me, was held for the full measure of its beat, and replaced by the next.

When I shut my eyes that night, I don’t know. But what I can reveal is that it became a life-long habit. To this day, I sit at the symphony or other concert venues, and shut my eyes during the performance, eliminating all distractions, living the sound. The experience is similar to the sense of fulfillment and infusion of energy after a deep, cathartic, meditation.

That evening, Ludwig van Beethoven became one of my gods of music. In my adolescence, he was joined by Bach and Mozart. Later still, in my 20s, Mahler was added to my pantheon.

Oddly enough, Mahler entered my life when I was, once again, many years later, listening to the radio. At the time, I was working on my degree in Art History, and was editing a paper I’d written on The Vienna Secession—the Fourteenth Vienna Secession Exhibition of 1902, to be exact. I was focused on Gustav Klimt’s mural, “The Beethoven Frieze.” My analysis of the frieze proposed that the seeds of German Expressionism were clearly evident in some of its details.

It was my habit to listen to the classical music station while I worked. I was delighted to hear that, on this evening, when I was polishing the paper I was to submit the next day, Mahler’s “Ninth,” performed by The New York Philharmonic, was to be broadcast.

Carl Jung’s concept of synchronicity came immediately to mind. For, at the opening of the Secession Exhibition, where Gustav Klimt’s “Beethoven Frieze” graced one of the rooms, Gustav Mahler conducted Beethoven’s “Ninth Symphony,” which Klimt’s mural celebrated.

I’d never given Mahler much thought before that night. But when the first notes of his “Ninth” filled my little study, I was in thrall to his genius. I also noticed how heavily he was influenced by Beethoven.

The research I’d done on the paper led me to reassess my rather limited opinion of Klimt as an artist. Out went my adolescent arrogance at classifying Klimt as a “decorative” painter of superb skills but little subtext. I saw, in that mural, the depth of his perception, the genius of his enormous talent.

Gustav Klimt’s “The Beethoven Frieze: The Longing for Happiness Finds Repose in Poetry” (Right Wall): Note the chorus at center, and the lovers whose legs are bound.

Klimt’s iconic and Byzantine use of detailed ornament illuminated the figures of the chorus, singing the final movement of Beethoven’s “Ninth, The Ode to Joy.” There, in his rendering of the figures was all the exuberant exultation that Beethoven expressed in his equally iconic and complex combination of notes.

And then, as a wake-up call to what, perhaps, he sensed was beginning to happen in Germany, Klimt introduced grotesque and horrifying figures whom he named: an apelike creature he called “The giant Typhoeus” flanked by “Gorgons” and “Hostile Forces.” There is, too, in the second image, above, the desperation of the naked lovers, embracing avidly, as if to ward off the inevitable tide of history. 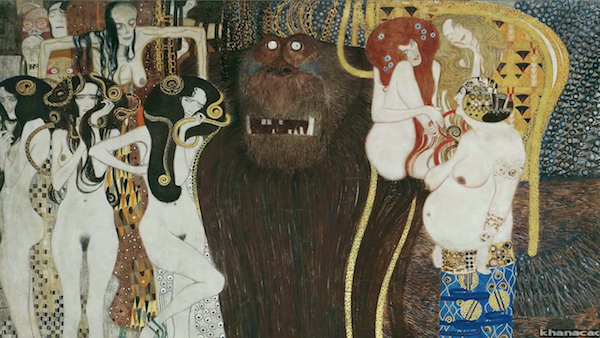 Music and art are an integral part of my life, my identity. And while I delighted in words, songs, and images from a very early age, it wasn’t until my first encounter with Ludwig at ten, that I knew how to live the sounds. It wasn’t until I examined Gustav Klimt’s “Beethoven Frieze” that I learned to see beyond artists’ techniques and into their intentions.

It was then, with my deliberate examination of Klimt’s mural, when I listened, again, to the symphony that inspired it, when I heard the sweep of Gustav Mahler’s “Ninth,” that I truly understood the enormity of the importance of all art forms. It was then that I understood that through artists of every medium, we perceive history which has passed and history that is yet to be written.

How wonderful that our editor suggested this theme for our first columns of 2018. How timely! For, as I write, the Legion of Honor, a museum in San Francisco, has a segment of Klimt’s mural on display. I’ve looked at it, and will most certainly go back several times to gaze at it again. It is, after all, a visual reminder of my life-long love affair with Ludwig and the two Gustavs.

A very happy 2018 to you all. Remember to revisit those things that make your spirits soar. Joy is essential to life. May yours be replete with it.

One Response to Ludwig, Two Gustavs & Me (Best of Hubris)