“Come back to me. Please. More than ever before, I need your wisdom, your strength and your bottomless love. You know where to find me, sweet exile.  I’d leave a light on for you, but you supply your own.”—Burt Kempner 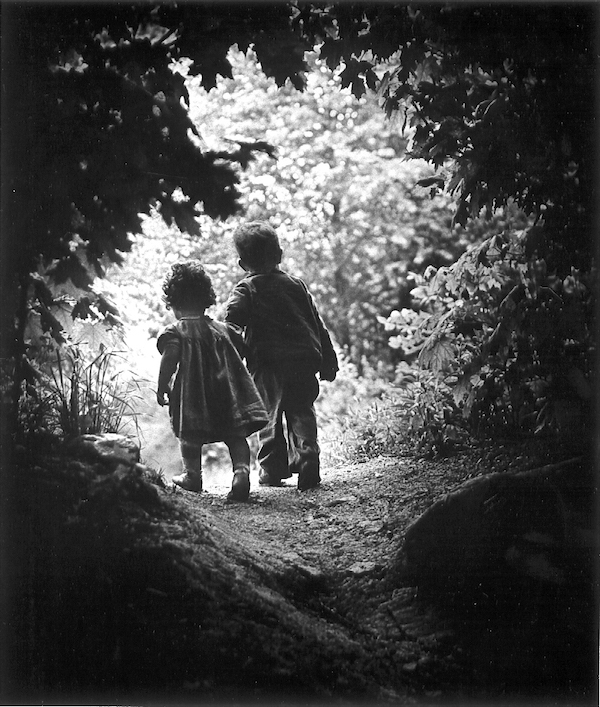 “A Walk to Paradise Gardens,” by W. Eugene Smith.

GAINESVILLE Florida—(Weekly Hubris)—April 2020—She was fluent in kindness and spoke several dialects of compassion. When playgrounds taunts and threats reduced me to impotent tears, she gave me comfort. When my imaginary friend came to visit, she set out an extra place setting. She wouldn’t let me pass a flower without stopping to linger over its shape and color. When it rained hard and worms writhed helplessly on the surface and I raised my foot to strike, she halted me in mid-stomp. She taught me how to laugh at things that were funny, not cruel.

I think I was six or seven when she began to die, when others started telling me she wasn’t a suitable playmate. Even my parents turned on her, gently but insistently. “Boys don’t . . .” “Boys never . . .” Her outline grew fainter, her voice thinner as her influence began receding farther and farther into the distance.

I still have a number of keepsakes of her, my feminine me. When I open myself to being vulnerable and discover it’s not as awful as I’ve been told for most of my life. When I gathered my child to my side, not because he was my heir but because he simply was. When my first instinct is to relate instead of to conquer.

She was drummed out of me and I let it happen because they let me know what was in store for me if I didn’t. But now I’m a year-kissed 72 and I don’t give a damn what they think or what they’ll do.

Come back to me. Please. More than ever before, I need your wisdom, your strength and your bottomless love. You know where to find me, sweet exile. I’d leave a light on for you, but you supply your own.

About the photo above: Alex Selwyn-Jones writes: “W. Eugene Smith was no doubt one of the greatest war correspondents of the last century. As the photographer for ‘Life,’ he followed the island-hopping American offensive against Japan, from Saipan to Guam, from Iwo Jima to Okinawa, where he was hit by mortar fire, and invalided back.

“His war wounds cost him two painful years of hospitalization and plastic surgery. During those years he took no photos, and it was doubtful whether he would ever be able to return to photography. Then one day in 1946, he took a walk with his two children, Juanita and Patrick, towards a sun-bathed clearing:

‘While I followed my children into the undergrowth and the group of taller trees–how they were delighted at every little discovery!–and observed them, I suddenly realized that at this moment, in spite of everything, in spite of all the wars and all I had gone through that day, I wanted to sing a sonnet to life and to the courage to go on living it . . . .

‘Pat saw something in the clearing, he grasped Juanita by the hand and they hurried forward. I dropped a little farther behind the engrossed children, then stopped. Painfully I struggled— almost into panic—with the mechanical iniquities of the camera . . . .

‘I tried to, and ignore the sudden violence of pain that real effort shot again and again through my hand, up my hand, and into my spine . . .  swallowing, sucking, gagging, trying to pull the ugly tasting serum inside, into my mouth and throat, and away from dripping down on the camera . . . .

‘I knew the photograph, though not perfect, and however unimportant to the world, had been held…. I was aware that mentally, spiritually, even physically, I had taken a first good stride away from those past two wasted and stifled years.’

“While he was right about his stride towards recovery, Smith miscalculated the photo’s importance. In 1955, a heavily-indebted Smith decided to submit the photo to Edward Steichen’s now-famous ‘Family of Man’ exhibit at the MOMA. There, it became a finalist and then the closing image, thus cementing its position as the ur-icon of all family photographs.”