“Today, after many classes where I was advised to think of each dance as a ‘three-minute love affair,’ and after scores of hours practicing in a studio, not to mention many, many nights out on the floor dancing to live swing bands, I have come a long way. In the beginning, my teachers referred to my moves as ‘hideous and laughable,’ but, these days, those very same teachers lavish high praise on my moves with observations such as, ‘He’s not as bad as he looks.’”—Ross Konikoff 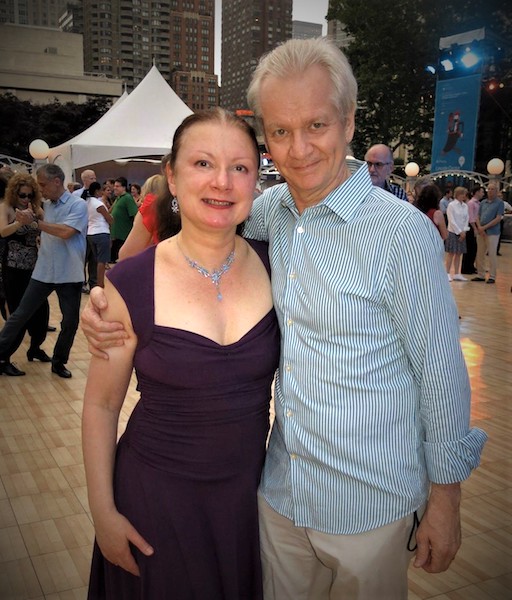 Ross and Deborah at the Lincoln Center Midsummer Night Swing.

MANHATTAN New York—(Weekly Hubris)—May 1, 2021—Of all the things Deborah misses most due to the past twelve-month lock-down, the annual three-week-long Lincoln Center Midsummer Night Swing dance festival tops the list.

Deborah, being a fantastic swing dancer, having competed in numerous ballroom competitions, insisted I learn to dance at the very start of our marriage. We’ve attended this celebration every year since its inception 26 years ago. They feature a different live orchestra every night, a rarity in these days of taped music and DJs.

In fact, many of you musicians reading this have appeared up on that bandstand over the years, playing two sets of great music while watching me flounder around on the floor! Dancing has never been easy for me and, a few nights ago, after downing several vats of gin, I finally broke down and related to Deborah the sad story of how I developed a deep-rooted aversion to dancing, tearfully recounting the trauma I suffered as a young teen in the seventh grade. The wounds may have healed, but some nasty scars lie in their wake. Anyway, since the cat’s out of the bag, I may as well spill the remaining beans. 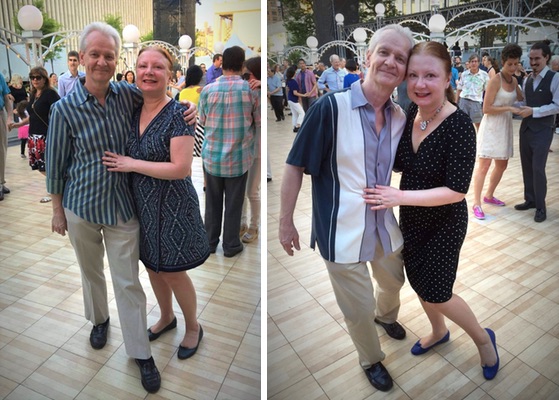 Right around the mid-20th-century mark, the Buffalo Public School System decided to include, as part of its Comprehensive Physical Education Curriculum, a course in ballroom dancing. I found it terribly embarrassing trying to dance while reconciling the inner with the outer manifestations of this emerging 13-year-old boy as I held a real, live girl in my arms for the first time.

This experience triggered a blizzard of conflicting emotions, each colliding with the others like subatomic particles smashing together in a cyclotron. I was buffeted from all directions by the opposing crosswinds of blinding lust and revolting disgust.

Although I never mentioned my suspicions to Mom and Pop, I was convinced that, as a result of the school’s Gigolo Training Program, my endocrine system was catapulted prematurely towards that of a middle-aged, twice-divorced alcoholic.

Sure enough, at my annual physical later that year, our family doctor noted my abnormally high testosterone levels and expressed his bewilderment that I hadn’t yet sported a pencil mustache, started pomading my hair, and begun speaking with an Eastern European accent.

To further complicate matters, our instructor was a humorless, former ballroom dance champion, hopelessly embittered by her longtime partner’s recent abandonment as well as her steep three- month decline from National Championship Ballroom competition at the Hollywood Palladium Ballroom in Los Angeles, with Lester Lanin himself waving the baton, all the way down to teaching pimply-faced teens the Box Step in a suburban Buffalo Junior High School. From where I stood, however, my dilemma eclipsed hers by a mile.

But today, after many classes where I was advised to think of each dance as a “three-minute love affair,” and after scores of hours practicing in a studio, not to mention many, many nights out on the floor dancing to live swing bands, I have come a long way. In the beginning, my teachers referred to my moves as “hideous and laughable,” but, these days, those very same teachers lavish high praise on my moves with observations such as, “He’s not as bad as he looks,” “I’ve never seen dancing like that,” and “He’s never looked better!

I haven’t yet gained the confidence to assume I’ll always do the right step, on the right beat, with the right technique, but there’s one thing I have gained for sure: a fantastic, enthusiastic, patient, understanding partner, the girl with whom I’ll happily dance a million more “three-minute love affairs,” and, as far as I’m concerned, that makes me Fred Astaire.

One Response to My Three-Minute Love Affairs