One American Muslim Speaks About His Faith

“At the end of the gig, a group of four people came up to me. I don’t think they were from the City; my guess would be they were from somewhere in the Mid-West. They were very complimentary about the music, inquired about purchasing CDs and, then, asked about the quotes, saying they were ‘really beautiful.’ They wanted to know if those were my own words and, of course, I said no. I told them they were from a great man whose teachings had helped transform a huge portion of humanity.”—Barry Danielian

Note: This op/ed by musician Barry Danielian first ran in Weekly Hubris on 7/18/2011, but it seemed to the editor the perfect time to re-post it, for new readers.

I maintain a tradition, when performing gigs with my own group, of reciting quotes throughout the gig.

Sometimes, they have a connection to the song we’re about to play; sometimes they reflect what is “in the air” at that time, be it politics or social commentary.

The particular performance that’s the subject of this column was held during a time when segments of our country were being manipulated and put into a state of fear by a rising tide of Islamophobia. 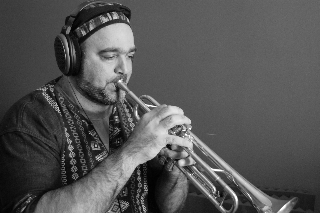 To be fair, misguided actions perpetrated by some of my co-religionists were adding fuel to this fire and, indeed, a large part of the Muslim world has been dysfunctional for quite some time. It was within that specific context that I decided to take all my quotes that night from the sayings of The Prophet Muhammad.

It was a great night of music, the band was slamming, the crowd was very excited, and they were enthusiastic and responsive to the quotes. Mind you, I usually mention from whom my quotes derive but, this particular night, I decided not to—for a reason. I wanted the wisdom in the words to take effect without the listeners’ previously held opinions or prejudices getting in the way.

At the end of the gig, a group of four people came up to me. I don’t think they were from the City; my guess would be they were from somewhere in the Mid-West. They were very complimentary about the music, inquired about purchasing CDs and, then, asked about the quotes, saying they were “really beautiful.”

They wanted to know if those were my own words and, of course, I said no. I told them they were from a great man whose teachings had helped transform a huge portion of humanity.

They guessed the source was “Gandhi; Buddha; Jesus.” They even thought the words might hail from “Asian philosophy.” When I finally told them that these were quotes from The Prophet Muhammad, they didn’t believe me. Not only didn’t they believe me, but they were quite sure it was impossible that these words could ever have come from him.

I told them that these quotes were from the hadeeth (traditions and sayings of The Prophet) and there were many books available . . . many by non-Muslims. They abruptly changed the subject, thanked me for the music and left.

This may seem strange but it’s not. Almost since the beginning of Islam, much disparaging and inaccurate information has been spread about The Prophet. Ironically, of all the prophets and religious leaders of world religions, more historical information is available about The Prophet Muhammad than any other. We have very accurate and voluminous writings about him, much of which was written during his lifetime. Even given man’s inclination to exaggerate, enough consistent information exists from a variety of sources that we can form a very clear picture of not only what he said and did but who he was as a person.

Why is this important?

One out of every five human beings on this planet is Muslim.

And we are all taught to model our behavior after our Prophet.

He, of course, saw himself modeling the perennial prophetic tradition. So it begs the question who is modeling what? Are those nihilistic suicide bombers modeling him? Or are my saintly teachers from West Africa? Is it some of my harsh brethren who are so sure everyone except them is going to hell? Or is it Malcolm X, who upheld moral principles of social justice and spoke truth to power? Is it the Taliban in Afghanistan or the Sufis in Yemen?

Interesting and compelling questions, to be sure.

Islam is not alone in attracting people whose behavior ranges from the most cruel to the most spiritually sublime, all acting in its name. Christianity has contained just as diverse adherents.

In fact, not long enough ago, in our own American history, quite horrific things were done to Native and African peoples in Christ’s name, while other Christians gave their lives to fight against this evil. The difference, in my opinion, is that the greater society in the West, whether Christian or not, has a working knowledge of the basic tenets or creed of Christianity. This is far from the case as regards Islam. In fact, most of the information provided by the media in our post-9-11-world has been produced by so-called experts, pundits who have never studied with scholars of the Islamic tradition. Many actually display contempt and, in some cases, hatred for the subject in which they claim expertise. Their “reportage” is thus akin to someone providing people with “expert” medical knowledge when their only sources are textbooks, YouTube and Wikipedia. Be that as it may, much of the blame falls squarely on the shoulders of the American Muslim community. To some degree this is starting to change, but much damage has already been done.

Islam in America is not a new thing. There is well-researched and documented data that asserts from 20 to 30 percent of west-African slaves were Mandinka, Hausa, Wolof and Fulani. These tribes are all Muslim. In fact, the most valuable slaves were the women, due to their knowledge of horticulture. There were also many Yemenis who settled as farmers in Southern California in the late 1800s. Syrians, Lebanese and Turks also settled in more urban areas during this time. Like all arriving ethnic groups, they tended to be insular, as did the Italians, Irish and Jews.

Another underdocumented phenomenon has been the number of converts to Islam in America. While, historically, this group has comprised predominantly African-Americans, Latinos, Asians and people of European descent are growing in the ranks of the converted. The most recent studies show that Latinos, with a large percentage of women, are second only to African-Americans. Ironically, despite negative media portrayals and stereotypes, the ranks of American converts have grown even larger after 9-11. So, what is it about Islam that is attracting people? This is a complex and subjective question, and one should expect as many answers as there are converts. However, I will list a few common themes that may, I hope, help educate readers in some basic and not often talked about tenets of Islam.

1)    The Oneness of God. The ability of every human being to connect directly with her or his Creator. There is no priestly caste or intermediary between humankind and God.

2)    Islam acknowledges and honors all religious traditions. The other Abrahamic traditions and their prophets are named in the Qur’an, but the book also states that God sends guidance to all peoples. Muslims cannot say that Buddha, the Vedic avatars, Native American sages, etc. are not messengers to their people.

3)    Each individual is accountable for his actions. One’s ethnic group, race, gender, social position and wealth have no bearing on one’s standing with God. One’s good or bad actions and intentions, however, do.

4)    Man’s role is as the khalifah or caretaker of Creation. We are taught to live in harmony within Creation. In fact, an Islamic scholar of the Middle Ages wrote a legal brief against human beings on behalf of all the animals. Many others wrote about matters of ecology with which we are still dealing today, though on a much larger scale. To live harmoniously is self-sustaining. To live unharmoniously is self-destructive.

5)    The rational mind must be used to examine, observe and understand the natural world. In other words, things of the world should make sense on a basic level. Paradoxes are also part of that!

6)    Notwithstanding No. 5, we are limited in our human ability to know all things and must therefore accept that once we have exhausted all of our human capabilities, our faith and trust in God must be surrendered to. One’s goal is to stay constantly in that state while still engaging with the world.

8)    Every human being should live in a way that promotes justice, harmony and peace amongst all human beings, but should also have the courage to speak out and at times act when their rights are not being upheld. This mandate is not exclusively for Muslims vis-a-vis Muslims but, rather, applies to Muslims in their interactions with all humans. In other words, even if my society isn’t just, fair, and benevolent to all people, I myself should be. If enough people live this way . . . societies can transform. So it’s not a top-down but a bottom-up proposition.

A final, realistic word, though: just because these principles exist in Islam doesn’t necessarily mean Muslims are putting them into practice. I hope the eight examples I provide here will give the reader a better measure by which to judge whether or not a Muslim is acting “Islamically,” irrespective of his assurances or appearance.

Several of The Prophet’s quotes I cited that night at my gig follow here:

“Happy is the person who finds fault with himself instead of finding fault with others.”

“None of you truly believes until he wishes for his brother what he wishes for himself.” (Note: The Arabic word Muhammed used for “brother” denoted not a person’s tribe, race or religion, but meant, rather, “universal brother,” or “brother in humanity.”)

“The most perfect of the believers in faith is the best of them in moral excellence, and the best of you are the kindest of you to your wives and children.”

“There will come a time when men will spend great wealth building large buildings while, at the foot of them, will be the hungry and the poor.” He then began to weep.

Trumpeter/Producer-Arranger Barry Danielian has for two decades performed with many of the stellar names of the music industry (www.BarryDanielian.com) . Danielian’s touring and recording credits read like a Who’s Who of the music business; he’s worked with such diverse artists as Barbra Streisand, Tony Bennett, Tower of Power, Queen Latifah, Eddie Palmieri, KRS One, Branford Marsalis, Paul Simon, Tito Puente, James Taylor, Billy Joel, McCoy Tyner, Illinois Jacquet, Marc Anthony, Ricky Martin, The Roots, and Bono. He is constantly requested by such legendary producers as Phil Ramone, Jay-Z, Arif Mardin, Randy Jackson and Narada Michael Walden, and is currently one of the most in-demand trumpeters and arrangers in New York City. He is a prolific writer and producer whose music is used throughout the media industry (including MTV, A&E, Discovery Channel, History Channel and CBS). Danielian is also a lifelong martial artist, and practices Boxing MuayThai and Catch Wrestling. He is, as well, a full Instructor in the Filipino and Malaysian combat arts. He teaches classes in New York and trains NY/NJ law enforcement and corrections officers.
View all posts by Barry Danielian →
This entry was posted in Uncategorized. Bookmark the permalink. Follow any comments here with the RSS feed for this post. Post a comment or leave a trackback: Trackback URL.

One Response to One American Muslim Speaks About His Faith