P.G. Wodehouse & The Critical Code of The Woosters

“Pelham Grenville ‘P.G.’ Wodehouse, KBE (15 October 1881–14 February 1975) was the greatest writer of English of the 20th century. The snootier critics don’t agree. He is rarely bracketed with Evelyn Waugh, George Orwell, or D.H. Lawrence. He was too frivolous and he wrote too much.”—Michael House, FRGS 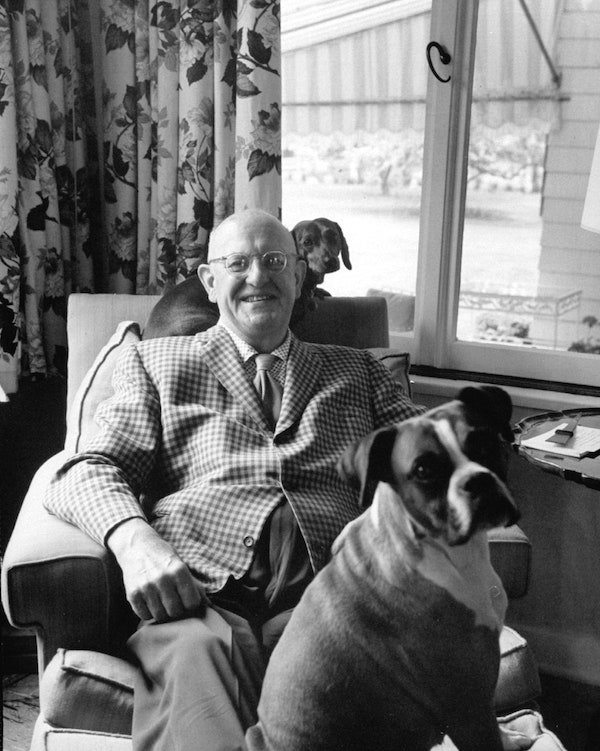 KING’S SUTTON, NORTHANTS England—(Weekly Hubris)—1 July 2021—Pelham Grenville “P.G.” Wodehouse, KBE (15 October 1881–14 February 1975) was the greatest writer of English of the 20th century. The snootier critics don’t agree. He is rarely bracketed with Evelyn Waugh, George Orwell, or D.H. Lawrence. He was too frivolous and he wrote too much. To be a great novelist in the eyes of the critics, publish no more than ten novels. If you turn out nearly a hundred, however good, you are a human sausage-machine, especially if you write funny stuff. You are fiddling while Rome burns. You must have social purpose.

“At the age of eleven or thereabouts women acquire a poise and an ability to handle difficult situations which a man, if he is lucky, manages to achieve somewhere in the later seventies.”—P.G. Wodehouse, from The Adventures of Sally

Wodehouse’s reputation is as a chronicler of aristocratic buffoonery who never did anything to make the world a better place (except make millions of people laugh.) But there is plenty of acute social commentary in which his opinions are made clear, especially in the earlier novels. Take women. Wodehouse’s heroines are strong, feisty, and self-reliant. In Something Fresh (1915; US ed. Something New) heroine Joan Valentine is given powerful speeches promoting equality of the sexes, and this at a time when even radical politicians such David Lloyd George strongly opposed women’s suffrage.

Wodehouse spent several years in New York at the start of the 20th century. He found plenty to criticize and he didn’t hold back. A Gentleman of Leisure (1910; US ed. The Intrusion of Jimmy) contains a vivid description of graft in the New York police force. The cop on the beat took small bribes. The sensible ones saved so they could buy promotion to a higher rank, when they could touch the big bucks. It cost $3,000 to be promoted to sergeant, and $15,000 for a captain’s rank. And dirty money flowed in abundance into the pocket of a Precinct Captain.

Slum landlords in New York were another topic that Wodehouse took on in the novel Psmith, Journalist (1915). This the only Wodehouse novel in which the anger of the author comes through clearly in the anger of a character, a magazine sub-editor who was determined to expose the owners of slum properties who employed thugs to turn families out onto the streets if they fell behind with the rent. On this subject, Wodehouse’s normal urbanity deserted him. Psmith and his friend Jackson come across a thoroughfare called “Pleasant Street.” They explore the foul tenements. Psmith, whose normal mode of expression is frivolous and circumlocutory, is for once terse. “This place makes me sick,” he says. Of the owner, Psmith says, “What he wants, of course, is disembowelling. I fancy, however, that a mawkishly sentimental legislature will prevent our performing that national service.”

“I am Psmith,” said the old Etonian reverently. “There is a preliminary P before the name. This, however, is silent. Like the tomb. Compare such words as ptarmigan, psalm, and phthisis.”—P.G. Wodehouse, from Psmith, Journalist

The Coming of Bill (1920; US ed. Their Mutual Child) reads as a scathing attack on eugenics, the science of producing perfect infants by selective breeding and eliminating human defects. Wodehouse also clearly deplored the follow-up practice of rearing children wrapped in cotton-wool, free of dirt, germs, and any form of contamination. The story was originally written for a pulp magazine in 1914. Many influential and important people supported eugenics before World War One, including Theodore Roosevelt, Woodrow Wilson, Winston Churchill, Alexander Graham Bell, Clarence Darrow, George Bernard Shaw, and Oliver Wendell Holmes. The Nazis claimed to draw their eugenicist inspiration from the United States. Incidentally, “Bill” is Wodehouse’s only non-comic novel. There isn’t a laugh in it from cover to cover.

Another subversive Wodehouse novel is If I Were You, (1931) which questions the whole concept of aristocracy. There is no innate superiority in the Best People with so-called blue blood. What they are is the product of their upbringing, not their genes. Mrs. Price was the wet-nurse of the future Earl of Droitwich when he was a baby, having a son of her own of the same age. But while the child’s parents were serving in India, Mrs. Price swopped the babies. The real Earl of Droitwich is her uncouth apparent son, Syd Price, a Cockney barber.

The butler doesn’t believe it: “A man with the blood of noble ancestors in his veins might possibly use a fish-knife for the entrée, but he would never take a piece of bread and mop up his gravy with it.”

“Unlike the male codfish which, suddenly finding itself the parent of three million five hundred thousand little codfish, cheerfully resolves to love them all, the British aristocracy is apt to look with a somewhat jaundiced eye on its younger sons.”―P.G. Wodehouse

The new earl’s relative try to force him to give up his claim by “training” him for his new role: riding, concerts, lectures, dressing for dinner, stiff collars. He hates it. And the former earl isn’t too impressed, either; it isn’t sporting. “I should have thought that the only excuse for people like us is that we’re sportsmen. Every time, in the old days, I got a twinge of conscience at the thought that I was living off the fat of the land and doing nothing to deserve it, I used to console myself by reflecting: ‘Well, at least I’m a sportsman! [Meaning, someone who acts decently.] And here I am, lending myself to a conspiracy to cheat this poor little blighter out of his rights.” Here, we have Wodehouse’s real opinion of the aristocracy he ridicules so relentlessly. And his grandfather was an earl. He knew whereof he wrote.

The former earl’s uncle rams the point home: “Don’t you realise that if this fellow wins his case it will be a menace to the whole peerage . . . . Here we’ve been for centuries saying that blood will tell and talking about the sacred heritage of birth, and along comes this fellow with the blood of God knows how many earls in his veins acting like a costermonger.”

“Mike nodded. A sombre nod. The nod Napoleon might have given if somebody had met him in 1812 and said, ‘So, you’re back from Moscow, eh?’”―P.G. Wodehouse, Mike and Psmith

In World War Two, Wodehouse, who was living in France, was interned by the Germans. He was tricked into broadcasting on German radio to the United States, which was then neutral (this was before Pearl Harbor.) The broadcasts were later used by US Intelligence to demonstrate how to get propaganda past the enemy. Unhappily, the broadcasts were accessible in the UK during one of the direst periods of the war for Britain. A disreputable journalist called William Connor, who wrote under the pen-name Cassandra, was recruited by the Minister of Information, the aptly-named Duff Cooper, to broadcast on the BBC a savage attack on Wodehouse, effectively calling him a Nazi collaborator. The BBC didn’t want to broadcast the piece but was forced to. There followed a predictable bout of virtue-signaling by the literary elite and book-burning by libraries. Wodehouse was basically a fascist sympathizer, bayed the mob.

Wodehouse’s detractors had obviously not read The Code of the Woosters (1938). One of the most important characters is Roderick Spode, leader of the Blackshorts. Spode is a caricature of the Fuhrer of the British Union of Fascists or Blackshirts, Sir Oswald Mosley.

“He felt like a man who, chasing rainbows, has had one of them suddenly turn and bite him in the leg.”―P.G. Wodehouse

Wodehouse, speaking through Bertie Wooster, puts Spode in his place as follows: “The trouble with you, Spode, is that just because you have succeeded in inducing a handful of halfwits to disfigure the London scene by going about in black shorts, you think you’re someone. You hear them shouting ‘Heil, Spode!’ and you imagine it is the voice of the people. That is where you make your bloomer. What the Voice of the People is saying is: ‘Look at that frightful ass Spode swanking about in footer bags [football shorts.] Did you ever in your puff see such a perfect perisher?’ So much for Wodehouse the fascist sympathizer.

So, there is a lot more to P.G. Wodehouse than eccentric aristocrats and parasitical young men-about-town. Even in the non-polemical novels, he is always on the side of the young, the impecunious and especially, young lovers thwarted by haughty, class and money-ridden elders. One of the good guys.

Editor’s Note: Readers wishing to read another, complementary, modern take on P.G. Wodehouse’s culpability for wartime broadcasts, read Rivka Galchen’s “Wartime for Wodehouse,” in The New Yorker, June 2020. George Orwell’s more famous “defense” of Wodehouse, “In Defence of P.G. Wodehouse,” (Windmill, No. 2, July 1945) is also worth our time, as well as Michael Hiltzik’s 2013 appreciation of this, and four other Orwell essays. Hiltzik: “’In the desperate circumstances of the time [ie, 1940], it was excusable to be angry at what Wodehouse did,’ Orwell wrote, ‘but to go on denouncing him three or four years later—and more, to let an impression remain that he acted with conscious treachery —is not excusable. Few things in this war have been more morally disgusting than the present hunt after traitors and Quislings. At best it is largely the punishment of the guilty by the guilty. ‘In England the fiercest tirades against Quislings are uttered by Conservatives who were practising appeasement in 1938 and Communists who were advocating it in 1940 . . . . If we really want to punish the people who weakened national morale at critical moments, there are other culprits who are nearer home and better worth chasing.’ Orwell was seldom better than when he was puncturing hypocrites. His technique is still relevant today.”

Michael House was born, of rural, peasant stock, in Somerset, England. He read law at Exeter College, Oxford and was elected President of the Oxford Union. In 1974, along with five colleagues, House started up a set of barristers' chambers in three little rooms in Lincoln's Inn, London, specializing in human rights and in representing the poor and dispossessed. The set now comprises 170 members and occupies a 17th-century building that was home to the only British Prime Minister to be assassinated (Spencer Perceval, 1812). In 1987, depressed by Mrs. Thatcher's third election victory, House fled to Greece for three years, where he was published in The Athenian and The Southeastern Review. He also there met his archaeologist wife, Diane. The pair returned to England in 1990 after a half-year, round-the-world trip, and settled in London and Northamptonshire. Since then, by way of escape from humdrum criminality, House has traveled in Tibet, Nepal, Sikkim, Ladakh, Uzbekistan, India, Pakistan, Turkey, Morocco, Syria, Jordon, Libya, Mongolia, Kashmir, and Sri Lanka, where only the stout walls of Galle Fort saved him and his spouse from being swept away by the tsunami. House returns to Greece, his second home, almost every year. He has written for, inter alia, History Today, the Universities Quarterly, the Sydney Morning Herald, the Rough Guide to Greece and www.greecetraveler.com. House practices criminal defense law from Garden Court Chambers, Lincoln's Inn Fields, in London, and hopes that if he keeps on practicing, he may eventually get the hang of it. His yet unachieved ambitions are: to farm alpacas; see Tibet liberated from the Chinese jackboot; and live to see Britain a socialist republic.
View all posts by Michael House →
This entry was posted in Uncategorized. Bookmark the permalink. Follow any comments here with the RSS feed for this post. Both comments and trackbacks are currently closed.